Speaking of churches and the future of these buildings, there will be a one-day workshop on September 24th, 2015 in Sydney, Cape Breton.
A note of interest in the workshop poster below - on the top right is PEI's New Glasgow United Church - demolished in August 2011!
For more information see the following website...

REGENERATING PLACES OF FAITH
A WORKSHOP FOR RURAL AND SMALL URBAN COMMUNITIES
Thursday, September 24, 2015, 10:00 AM – 4:00 PM
New Dawn Centre for Social Innovation, 37 Nepean Street, Sydney, Nova Scotia
Places of faith anchor and shape our communities. Yet many congregations are facing declining attendance and insufficient funding to maintain and operate their buildings. These important community assets are in a period of transition, both in rural and in small urban areas. What is their future? Whether it is to keep the doors open, make strategic real estate decisions, or meet community needs in new ways, their future depends on urgent collaboration among community organizations, elected officials, faith group leaders, the business community, universities and more.
This one-day workshop will share inspiring examples and proven strategies that faith groups and community organizations can apply in Cape Breton and beyond. There will be time for some applied problem-solving as well. The session will be presented by two national organizations – the National Trust for Canada, and Faith & the Common Good – working in collaboration with Cape Breton University and the Sydney Architectural Conservation Society.  The organizers gratefully acknowledge the funding support of ACOA and the CBU Tompkins Institute.
Posted by Carter W. Jeffery at 7:45 PM 1 comment:

This year marks 125 years since Holy Trinity Anglican Church was consecrated - it is located on the western Road in Alma.
The old church, despite being in excellent condition, has an uncertain future - like most rural churches on our Island and throughout our country, they have lost their place in our society.  This little church belongs to the Parish of Alberton-O'Leary which has a total of four churches and a dwindling congregation.  Memorial services are held here twice every summer - the old families are mostly gone and the new generation has little interest in old ways and traditions.
Below are a few photos from the August 16th service this past summer. 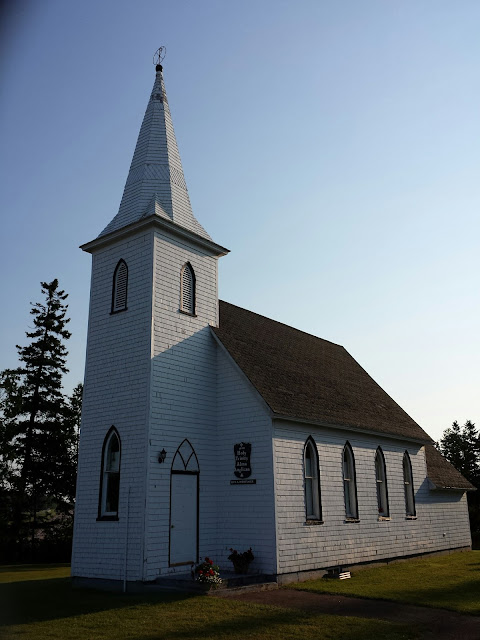 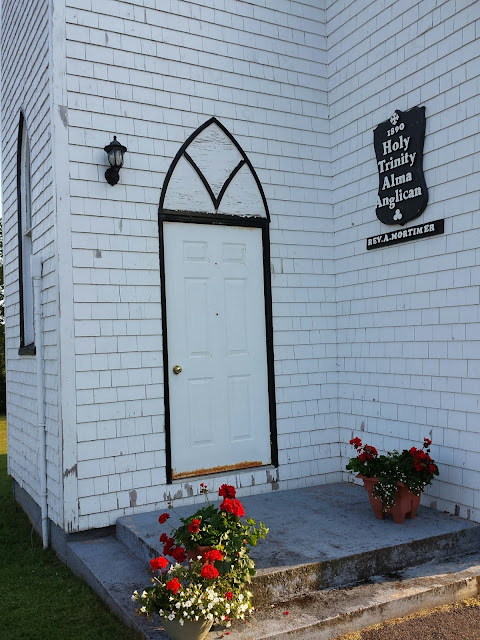 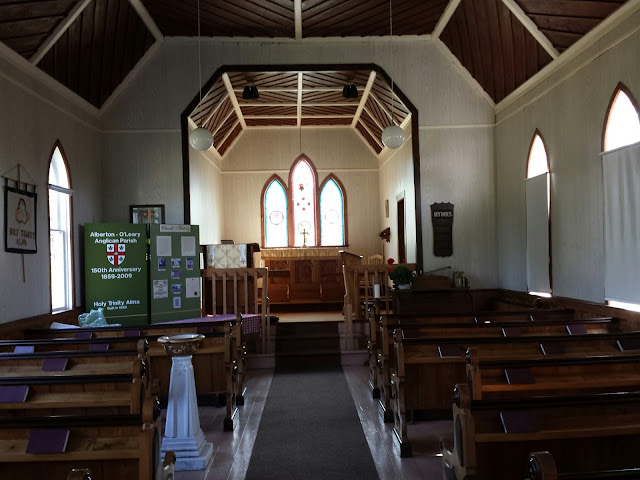 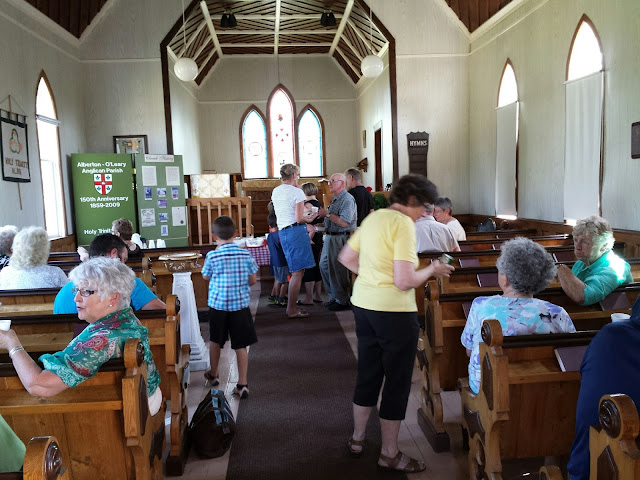 Posted by Carter W. Jeffery at 7:36 PM No comments:

I was up to the Palmer Road Parish Picnic this summer - my first time despite having grown up nearby!!  It was an excellent event on an incredibly hot summers day!  Great efforts in fundraising have been underway to paint the church this fall.
Here's a few photos I took inside the church (quilt show) and of a model of the church. 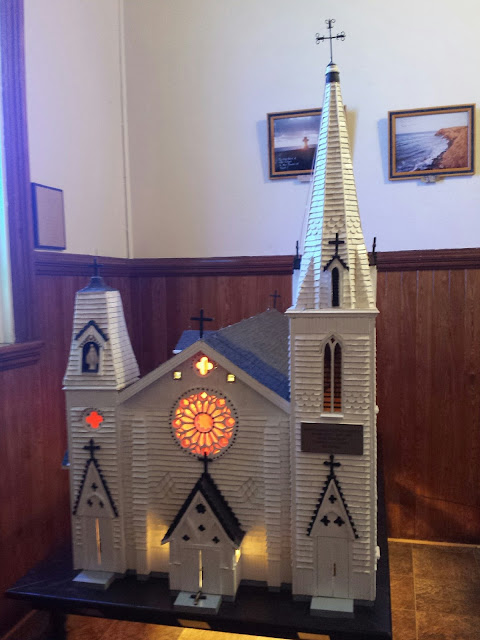 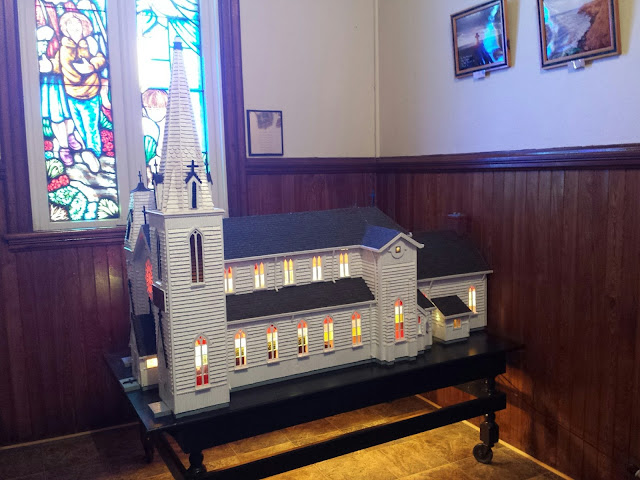 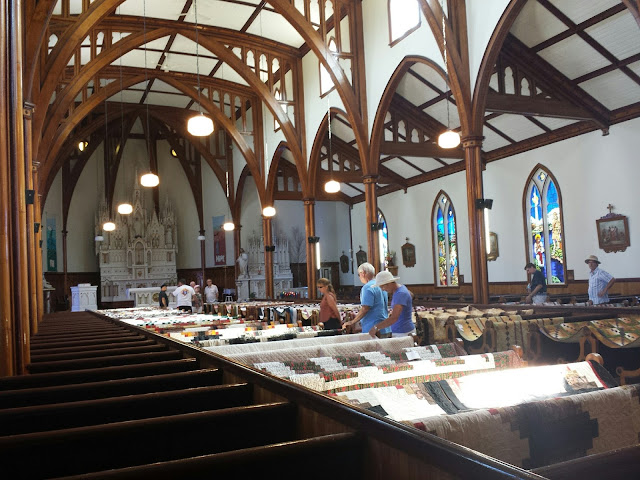 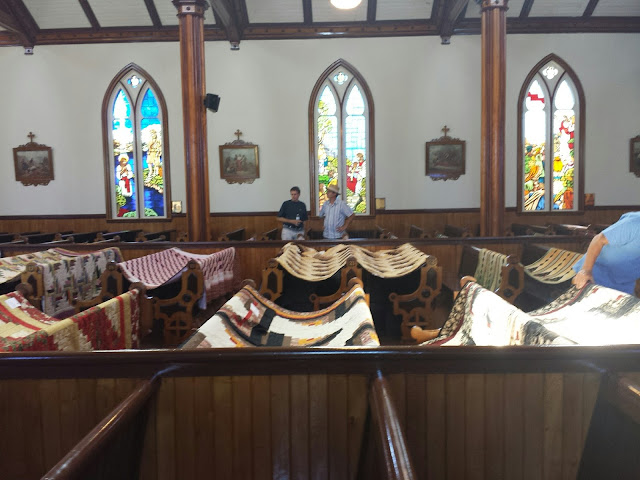 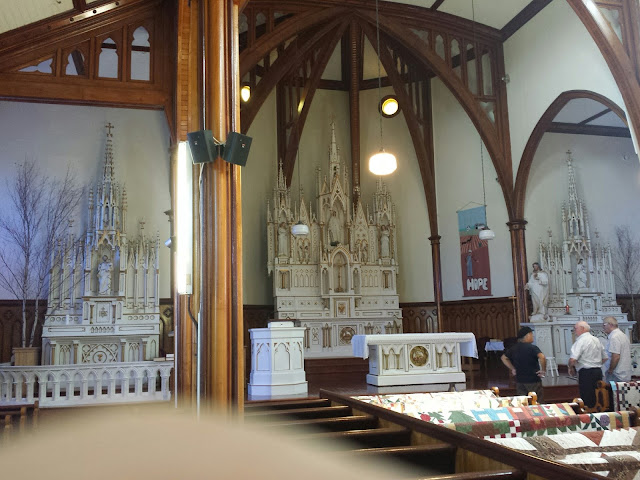 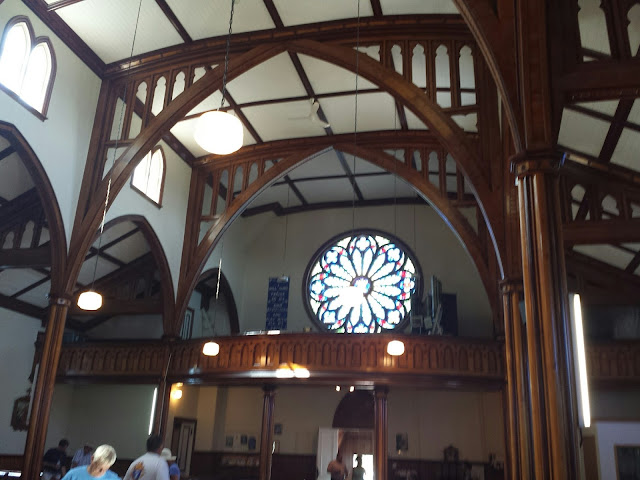 Posted by Carter W. Jeffery at 7:18 PM No comments: 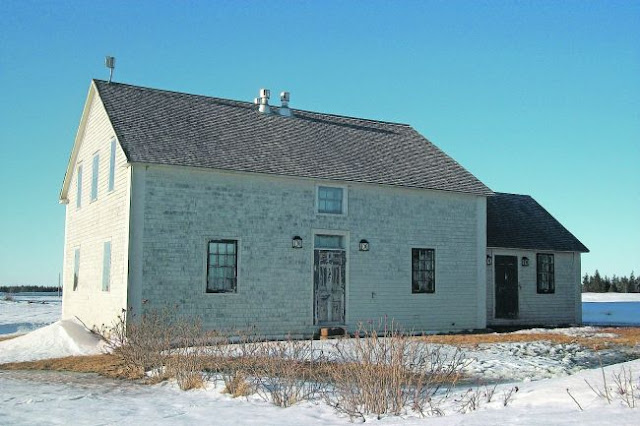 The Lyle House is an early example of Georgian classical architecture and used to be an inn/post office in Lot 16. Photo submitted by the Government of P.E.I.
* * * * * * * * *
SUMMERSIDE – At the same time the Lyle House was being built in Lot 16, the Battle of the Alamo was raging in Texas and Charles Darwin was forming his Theory of Evolution.
Since its construction in 1836 the house has by times stood proudly as a hub of activity as an inn/post office and been humbled by the ravages of time as a shed/chicken coop.
It has endured and outlasted history itself and now it, along with four other Prince County buildings, is being protected for future generations to enjoy.
The buildings have received ‘designated’ status under the Heritage Places Protection Act and have been added to the P.E.I. Registry of Historic Places.
Claude Arsenault, who purchased the house around 2005 and painstakingly restored and renovated it from a dilapidated state, is overjoyed with the designation.
“I’m thrilled, beyond thrilled,” said Arsenault.
“It’s an honour to live in this little house. It was built with a lot of love and care, it wasn’t slapped together in five minutes. The fact that it’s almost 200-years-old is a testament to the quality of the craftsmanship of these post and beam houses.”
Charlotte Stewart, a heritage officer with the provincial Department of Tourism and Culture, said all of these sites are unique in some way and are well worth protecting.
“It’s great to have these added to the registry, they really are important parts of our history and shows that the owners are interested, and place value on the buildings and want to see them recognized,” said
The Prince County buildings include: the Emerald, Kensington and O’Leary railway stations, St. Anne’s Church in Lennox Island and the Lyle House in Birch Hill. The West River petroglyph site in Bonshaw, Queen’s County, was also listed.
The P.E.I. Heritage Places Protection Act sets out two levels of recognition for homes.
The first, ‘registration,’ is basically honourific, and just signifies that the property has some historic note.
A step above registration is ‘designation,’ which is a means to protect the historic nature of the property. It places restrictions on the property in terms of what the owner can change and forces them to apply for a permit before making changes to the structure.
Properties receive registration and designation on the P.E.I. Registry of Historic Places by nomination and are vetted by a provincial committee which then makes a recommendation to the minister of Tourism and Culture, who makes the final approval.
As for Arsenault, he’s happy to keep living in his now officially historic house, until it’s someone else’s turn to protect it. He takes a transient view of such things.
“I’m 66 years old and I’ve come to the realization that nobody truly owns anything … We’re all just custodians, we borrow things and are kind of in charge of things – for a while,” he said. 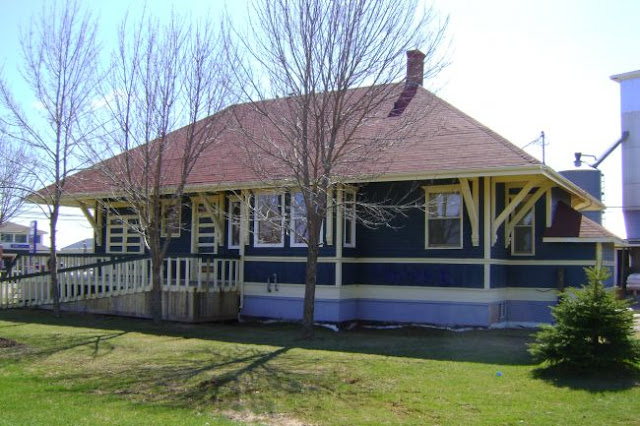 -       The Kensington Railway Station was built in 1905 and included P.E.I. stones in its construction. 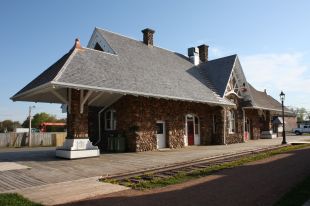 -       The Emerald Railway Station was built in 1924 and most of the community sprang up around it. 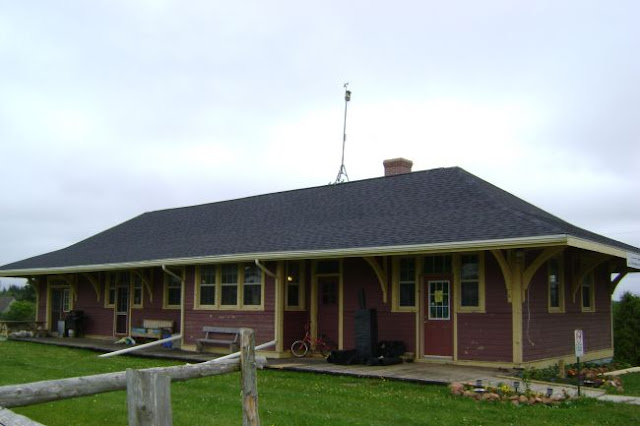 -       St. Anne’s Church in Lennox Island is an 1895 Gothic structure, designed by Summerside architect George Baker, who also designed many of the city’s fox homes. 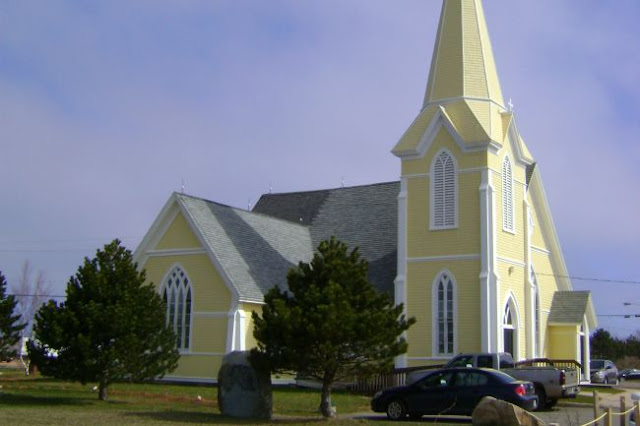 Posted by Carter W. Jeffery at 7:06 PM No comments:

Catching up on some old news...

...I have been distracted from my blog the past few months - I'm attempting to catch up on some important news.

Posted by Carter W. Jeffery at 6:54 PM No comments:

The article below appeared in the Journal-Pioneer newspaper in the mid-1950’s - the article was posted on the Facebook page of Norma Deagle-MacPhee,  summer 2015. 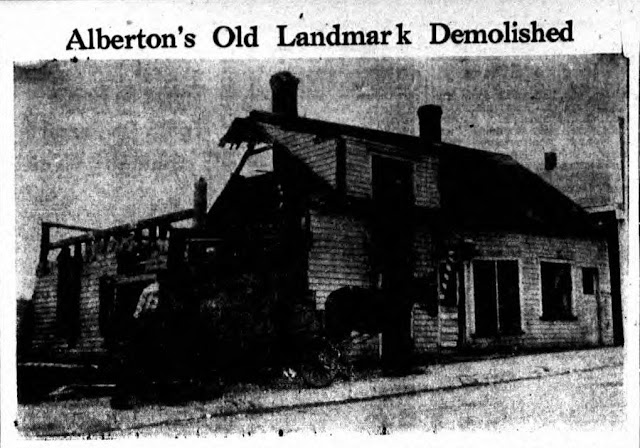 -  Pictured above in the first stage of demolition is an old building which has been a landmark in Alberton for more years than the oldest citizen can remember.  Although the date of its erection cannot be learned, the house is known to have stood on the west side of the main street for more than one hundred years.
In recent years the building has been permitted to fall into a regrettable state of disrepair and has come to be considered a fire hazard.  Nevertheless it has stood unscathed through fires which destroyed adjacent buildings.  About 1896 fire destroyed the buildings to the north on lots now housing the business premises of White and Son, C.R. Leard and Myricks Alberton Ltd.  In 1917 fire swept to within a few feet of its south wall when the entire business section on the west side of main street was razed.
The house was built by Mr. Edwin Wallace and lumber for its construction was sawn from trees removed from the lot on which it stands.  The work of demolition has revealed a heavy framework still in excellent condition.  Floors of two-inch plank are fitted together with groove and tongue as it was made in that day (grooves sawn in the planks and a tongue inserted).  Joists are mortised and the flooring is secured with wooden pegs several inches long and almost an inch in diameter.
In the beginning Mr. Wallace did not live in the house himself but rented it to Mr. and Mrs. Ireland who carried on a small business in one part of it.  A number of men and women still living in Alberton can remember buying candy there in their childhood, some of its being made by Mrs. Ireland herself.  Following the fire of 1896, which destroyed his place of residence, Mr. Wallace and his family lived in the house for some years.
The next long-time resident of the premises was Mr. William Wells and his little Confectionary Store is well remembered by some who do not yet class themselves as the older generation.
More recent occupants have been Dr. Cummings and Mr. Waldo Matthews, Jr.  About two years ago Mrs. William Wells and her daughter came back to live in their old home.  They returned again to St. John, N.B., last week.
Various small businesses have been carried on in the section of the building used as a store by Mr. Ireland and Mr. Wells.  Its most recent has been Mr. Gordon Jeffery, Barber.
The north section of the building which has been occupied by another barber, Mr. Alvin Bell, for the past 28 years is not part of the original structure but a later addition.
The property has been purchased by Messrs. Fred and Gordon White and it is understood that they will erect a modern structure on the site of this old one which probably stood there in the days when the present town of Alberton was only a place where a few buildings had sprung up at the intersection of two roads and was known as “The Cross” and the surrounding area was covered with trees and pine stumps.
Posted by Carter W. Jeffery at 6:34 PM No comments: