Gordon-Dunn-Holm House soon to be demolished in Alberton

This old house is located at the corner of Main and Carroll Streets on your way from downtown Alberton to Northport - not far from Sacred Heart Catholic Church.
It is said to be the oldest house south of "the cross" the main intersection in Alberton.  It was most recent the home of Harvey and Sandra Holm who lived here from 1984-2004 then rented it.  They believe the house is near 200 years old.
The ground under this house is mostly sand, once you dig through 6" of topsoil you hit sand.  Mr. Holm's said it was great digging fence posts.   He also said he used the old stone-lined well on the property for many years - it was 16'-18' deep and in recent years had a pipe going into the house to supply water, however, when three houses were built nearby it completely dried up.
The Holm's bought this house from Carl Shea; before him the house was owned by Bob Dunn (m. ? Gordon) who used the workshop at the back (next to Dufferin Street) to make sleigh runner, chafes, etc.; before the Dunn's the house was owned by the Gordons.
The house is said to have a ghost named "Rah" - the Holm's never experienced him.  See the story below from, Footprints in the Sands of Time: A History of Alberton, 1980. 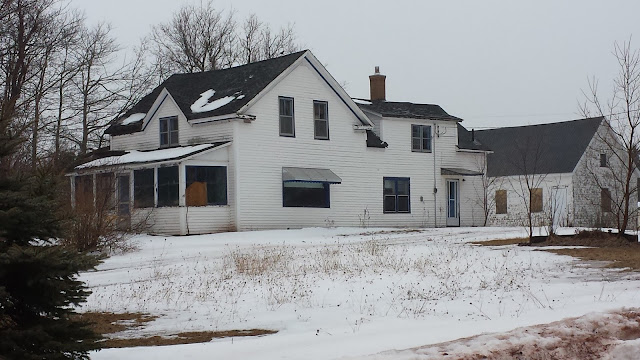 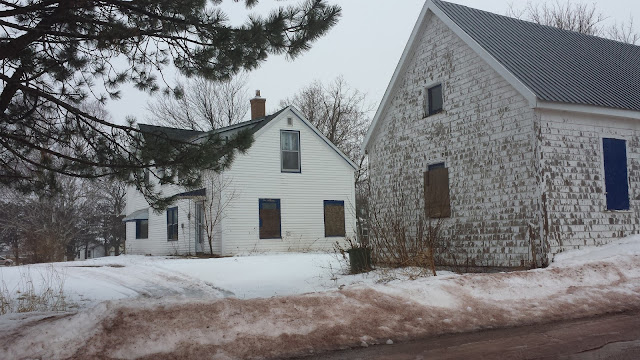 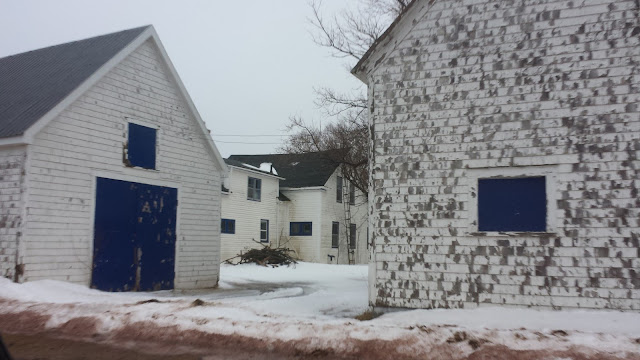 Page 265-266: "It's very rah (raw) the day," was the usual remark to fall from his Scottish tongue when he greeted an acquittance, so they called him, "Old Rah."  He lived in what is believed to be the oldest house between "The Cross" (corner of Church and Main, Alberton) and the settlement at Cascumpeque Point (Northport) - at the corner of Main and Carroll Streets.  Probably he acquired it about 1887 from James Gordon under whose name it appears in Meacham's Atlas of 1880.  One day, some years later, Old Rah dropped dead in the driveway and in 1902 his mortgaged property was sold to John Dun.  Another family moved into the house before it was purchased by Mr. Dunn and tradition says that Old Rah's ghost was seen in an upstairs bedroom.  Believers claim it was only a whitened flue, but the family left immediately.  This story was well known in the community and two of the Dunn boys, aged about then and twelve, made use of it to have some fun with their small sister on occasions when their mother was absent from home, "Old Rah will get you," they would exult as they locked her in the room where Old Rah was said to have been see, "Old Rah will get you."  The child was terrified but she dare not tell her parents lest the boy carry out threats of what they would do to her if any tales were told.  On other occasions they would tell her, "Old Rah will get you.  You just wait.  He'll reach out from behind one of those white birch trees beside the driveway and grab you.?  The little girl is a grandmother now.  She has not yet seen Old Rah but she never walks up the driveway to her old home at night without thinking of him."
Posted by Carter W. Jeffery at 8:43 AM No comments:

The "Brick House" in Stratford was torn down this week - it was located at 29 Stratford Road.
It's gone for good!!   There are few 188-year-old buildings left on Prince Edward Island.  I undertand the building was in poor condition, but there should have been some effort put in to saving it.  The first I heard of its impending demise this afternoon on CBC Radio's loccal Mainstreet Island news.
The Brick House was built in 1928 by William Mutch (1811-1884) aka. Brickhouse William.  He had 200-acres of land here.  The Mutch family lived in this house for many generation until it was sold out of the family in 1959 to Richard MacKinnon.
Brick houses are rare in rural Prince Edward Island - of the nine brick kilns operating on Prince Edward Island in the 19th-century, seven of them were located in Lot 48/ Stratford and Area.
The above information comes from the Historic Places website: 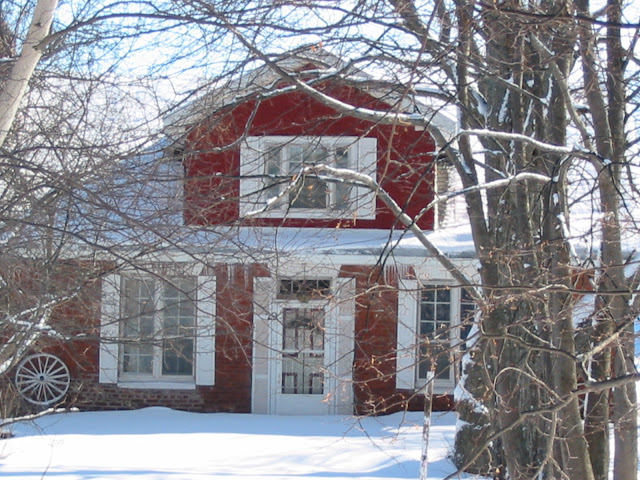 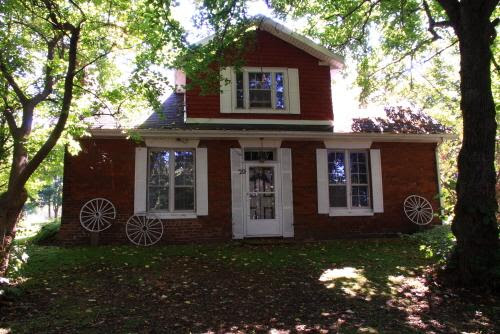 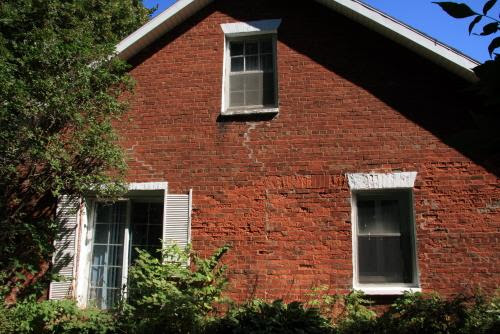 Below is an article written by Nancy Smith of Emyvale, P.E.I - she was a former member of Winsloe South United Church, one of the few brick churches on the Island.

Give Them Clay and They Will Make Bricks
By Nancy J. Smith - January 12, 1999
We are well aware of the hard work and creativity of our Island ancestoers and here is yet another example of their ingenuity.  Clay or ‘brick clay’ as commonly called, causes filtration problems and sets limits for land use.  The presence of clay is suspected in areas with a number of  springs and or swampy conditions and can be identified by its very plastic and greasy texture when wet.
The clayey type till, prominent in the western and south central parts of the Island, consists of silt and claystone (up to 3 meters thick) and accounts for approximately 30% of the exposed soils types.
Jim Young, Paul Baker, Scott Stewart and George Gaudet live in an area which is known for it prominent clay soils.  Jim will tell you that his property in Stratford would not handle an on site system because of the clay structure of the soil but because of  central sewer areas like Zakem Heights, where he lives, are developed on a larger scale.
In the book, A History of Southport, the chapter on businesses begins with the brick kilns.  It states “ The brick industry in Southport was once very important to the Island economy.  Of the nine kilns operating in the late 19th century, seven were in Lot 48.  The good brick clays as found in Southport were relatively rare on the Island.  Most (bricks) were used for chimneys and foundations.”   In Charlottetown, Southport bricks can be seen in the Prowse Bros. building, the Masonic Temple, Trinity United Church and City Hall.   And it has been said that the bricks were also used in the construction of the streets in Boston.
Tignish and Rocky Point are areas also known for their brickyards which operated throughout the 1800’s. The Main Building on the Campus of UPEI and Tignish’s St Simon and St Jude Church (1861) are  made from bricks manufactured in Tignish.  The history of the Winsloe South United Church  refers to the winter of  1880 when the horse and sleigh convoy traveled to Rocky Point for bricks to build the church.  Even though the Rocky Point  brickyard closed in the 1880’s it is still indicated on the PEI’s 1988 soils map as a bored pit, this is an indication of  just how restrictive uses for clay soil areas can be.
The Water Resources Division is certianly aware of the problems associated with brick clay or tight soil conditions. With the use of soils maps, well drillers records, onsite inspections and experiences the low permeability areas are identified.  Improvements in technology has allowed for some of theses areas to be utilized with on site sewage disposle units such as contour trenches systems or package treatment plants.
Today, through research and development Islanders, like their ancestors, continue to show their ingenuity for problem solving.
Posted by Carter W. Jeffery at 7:13 PM 1 comment: