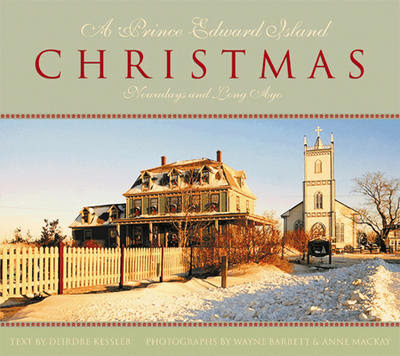 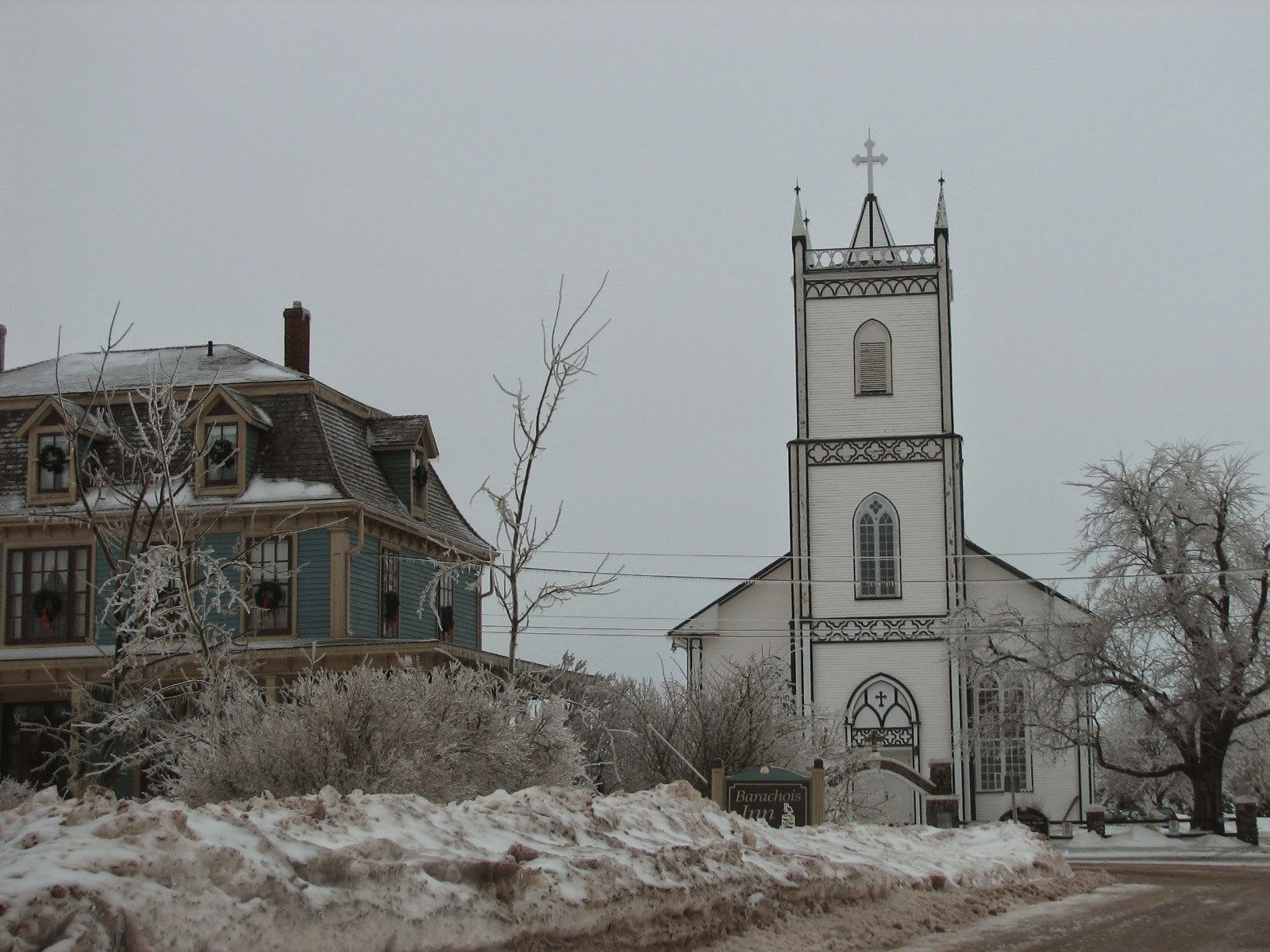 Posted by Carter W. Jeffery at 1:03 PM No comments:

Cape Bear Lighthouse, safely moved away from the cliffs

After ten years of discussing the urgency to move Cape Bear Lighthouse, it has happened and the lighthouse is safely away from the steep cliff.
Congratulations to the movers and the local citizens for making this happen.
Here's a photo from the CBC PEI's website - see the link below for more photos... 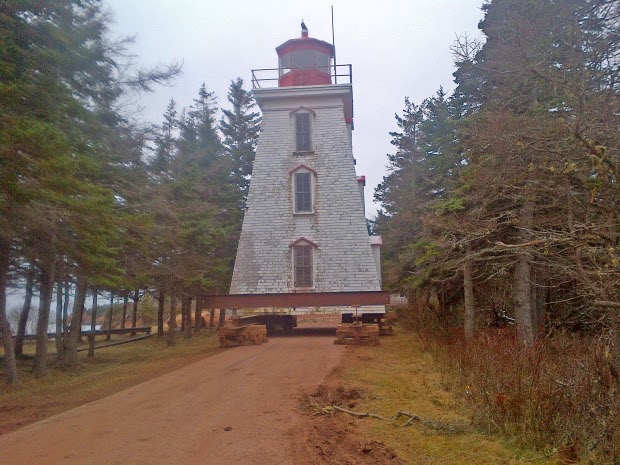 Posted by Carter W. Jeffery at 5:26 PM No comments:

The front page of The Guardian newspaper this morning tells today is the day Cape Bear Lighthouse is moving to its new location at Murray Head ( approx. distance 7km /4 mi ) - the most south easterly point of the Island.
Here are two photos I took of the lighthouse on August 30, 2013. 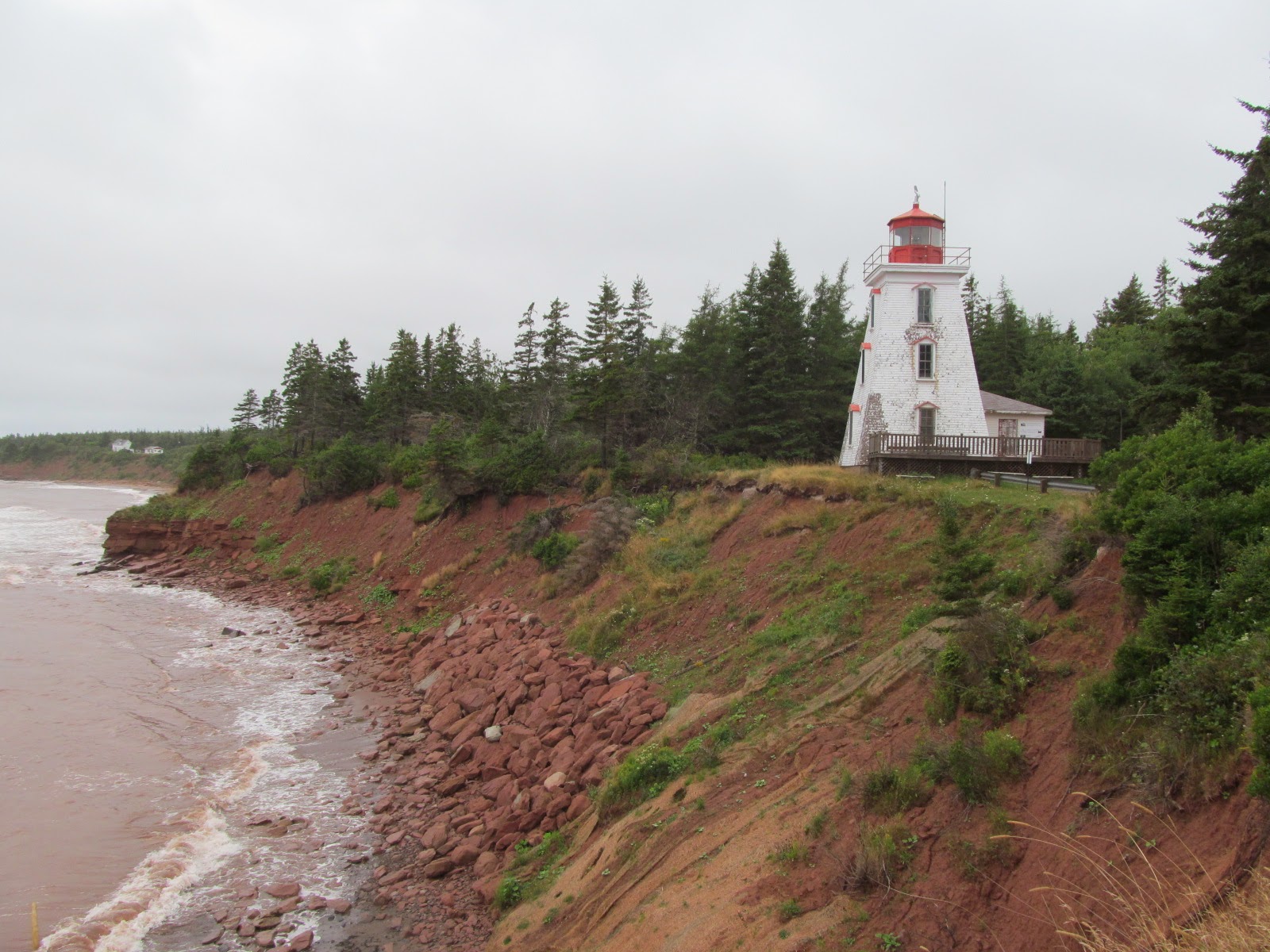 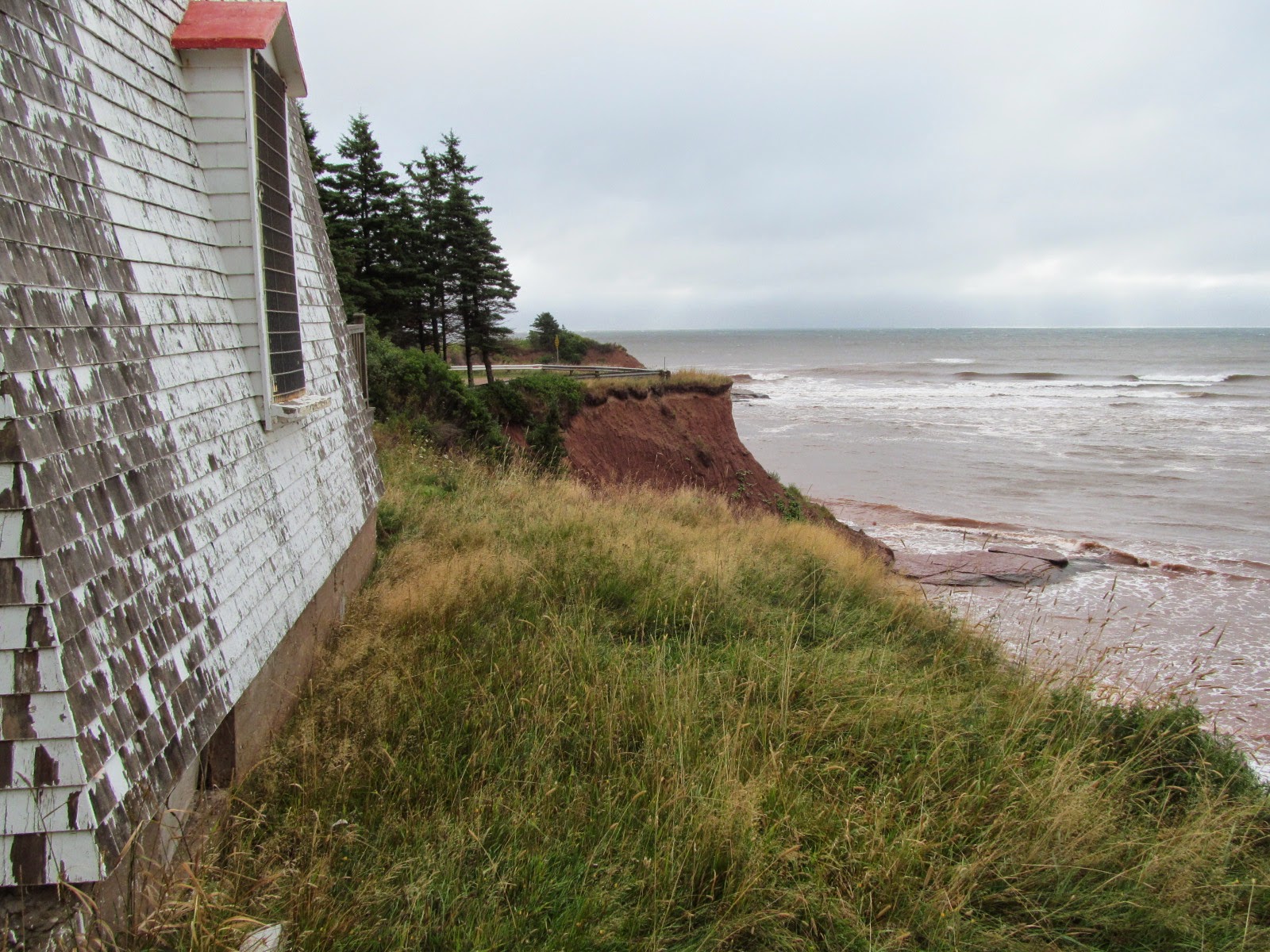 Below are photos of the new location. 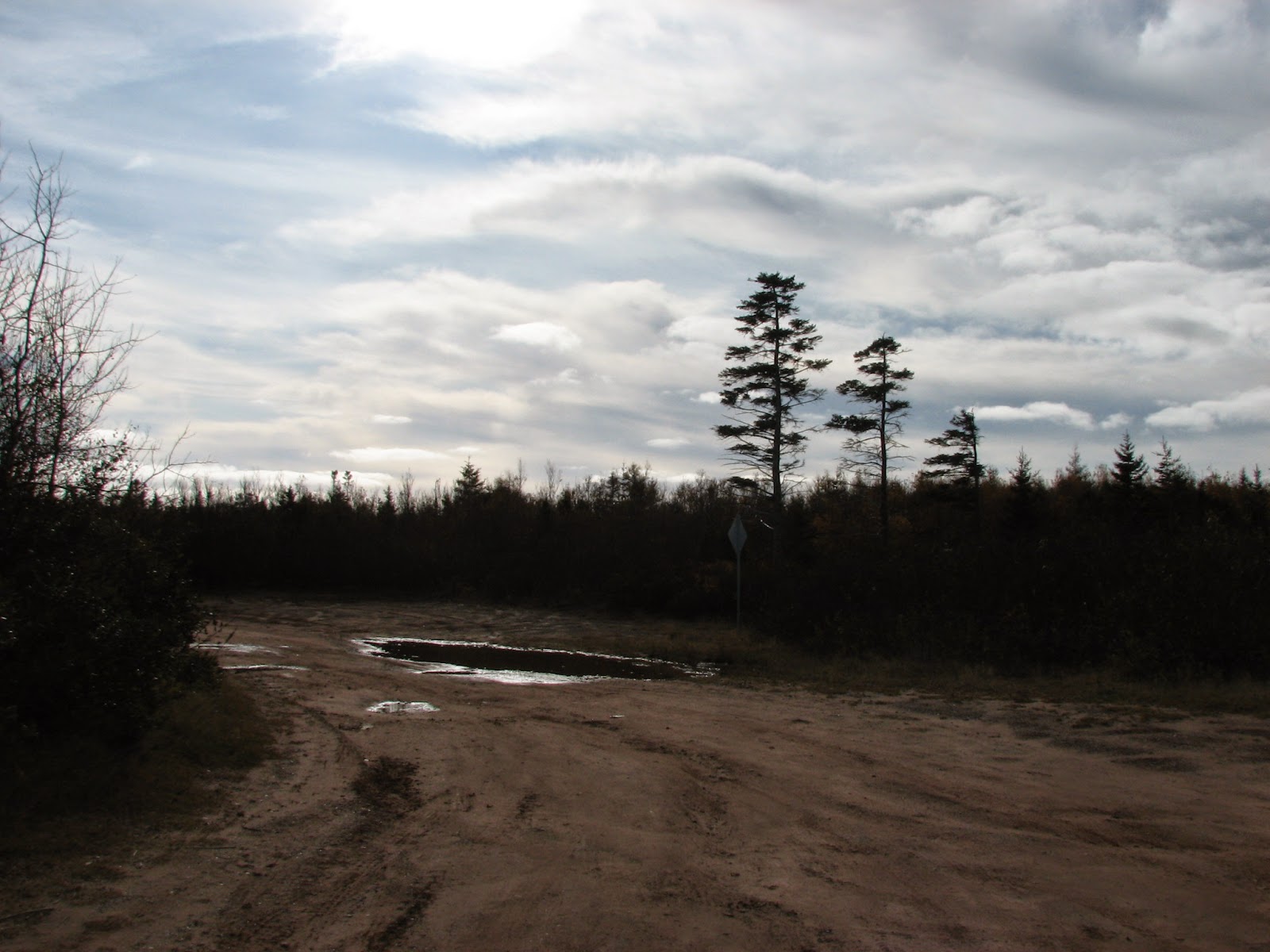 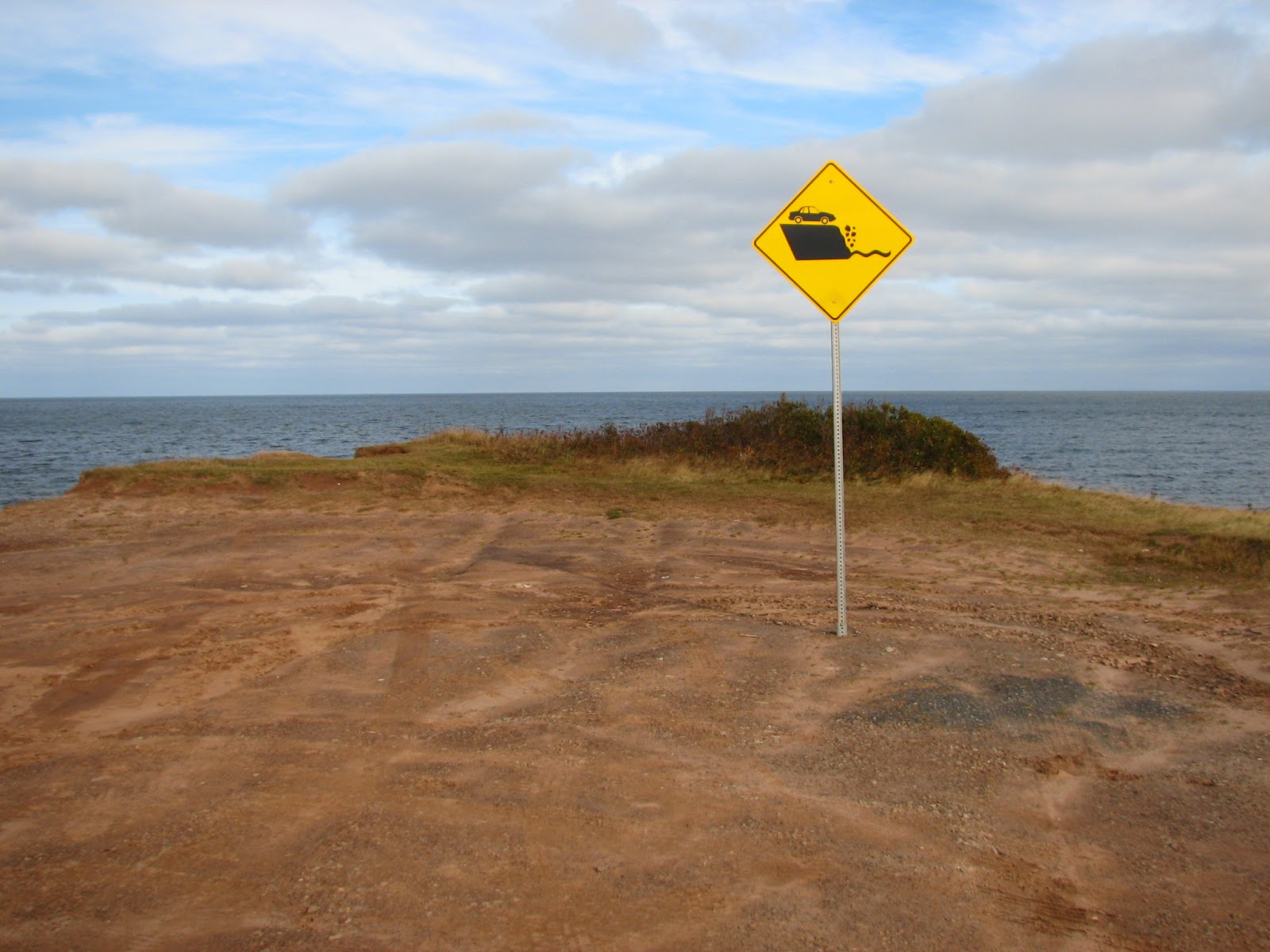 Below is a link to the newspaper article.

These images were taken at Leard's Grist Mill and Pond yesterday morning by CBC PEI's Steve Bruce.  Photos cf. CBC PEI Facebook page.
The structure was strongly built - I'm confident it will withstand the flood waters as it has so many times before!

Leard's Grist Mill was built in 1888 by James Barclay of O'Leary.  In the late 1890's Peter Warren Leard purchased the mill.  Three generations of the Leard family operated the mill including Peter's sons Waldron and Albert and his grandson Warren, who closed it in 2002 after working here for more than 50 years.
The mill belongs to The Canadian Potato Museum in O'Leary.

Below are a few photos I took of Leard's Grist Mill this fall. 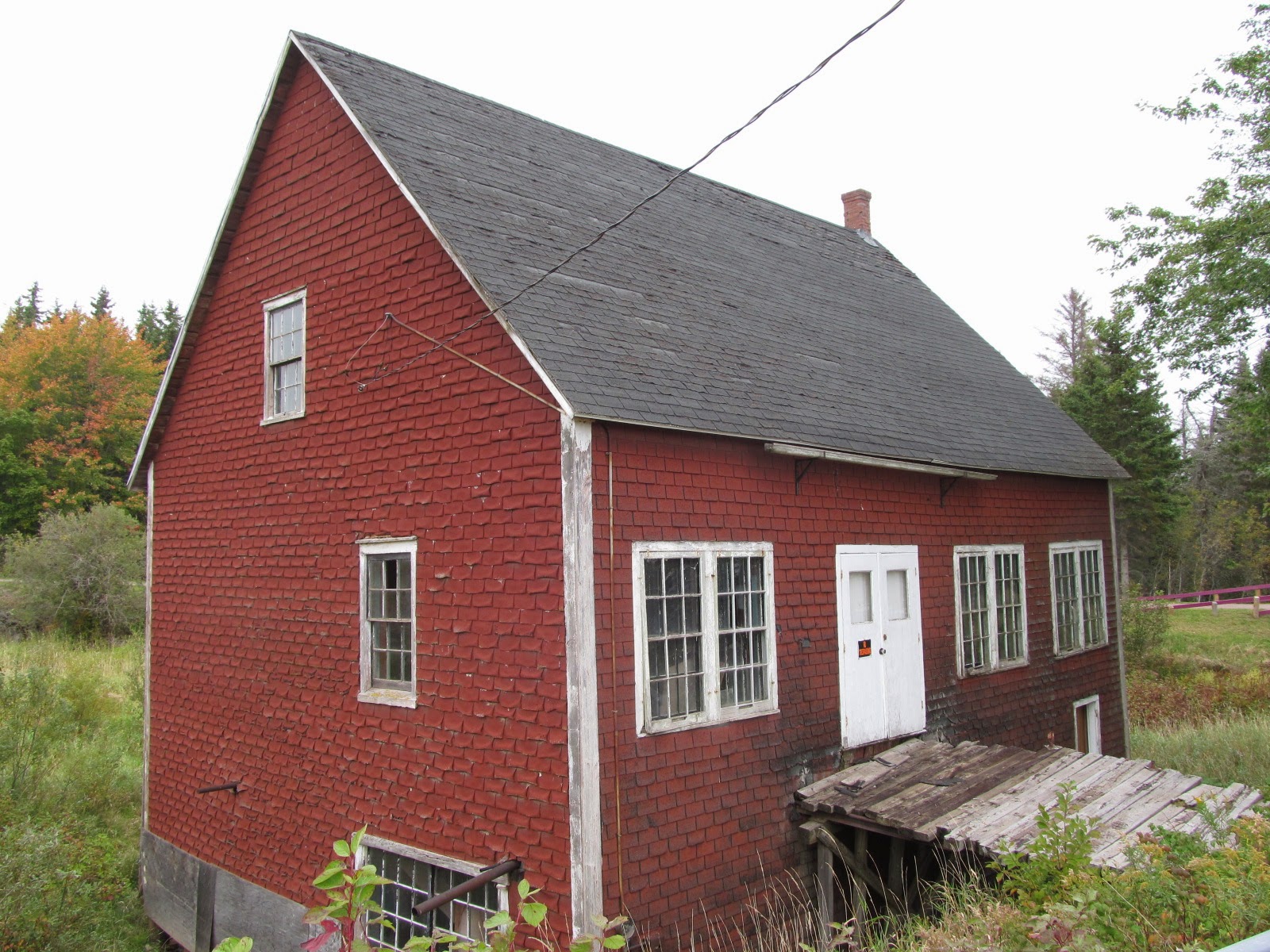 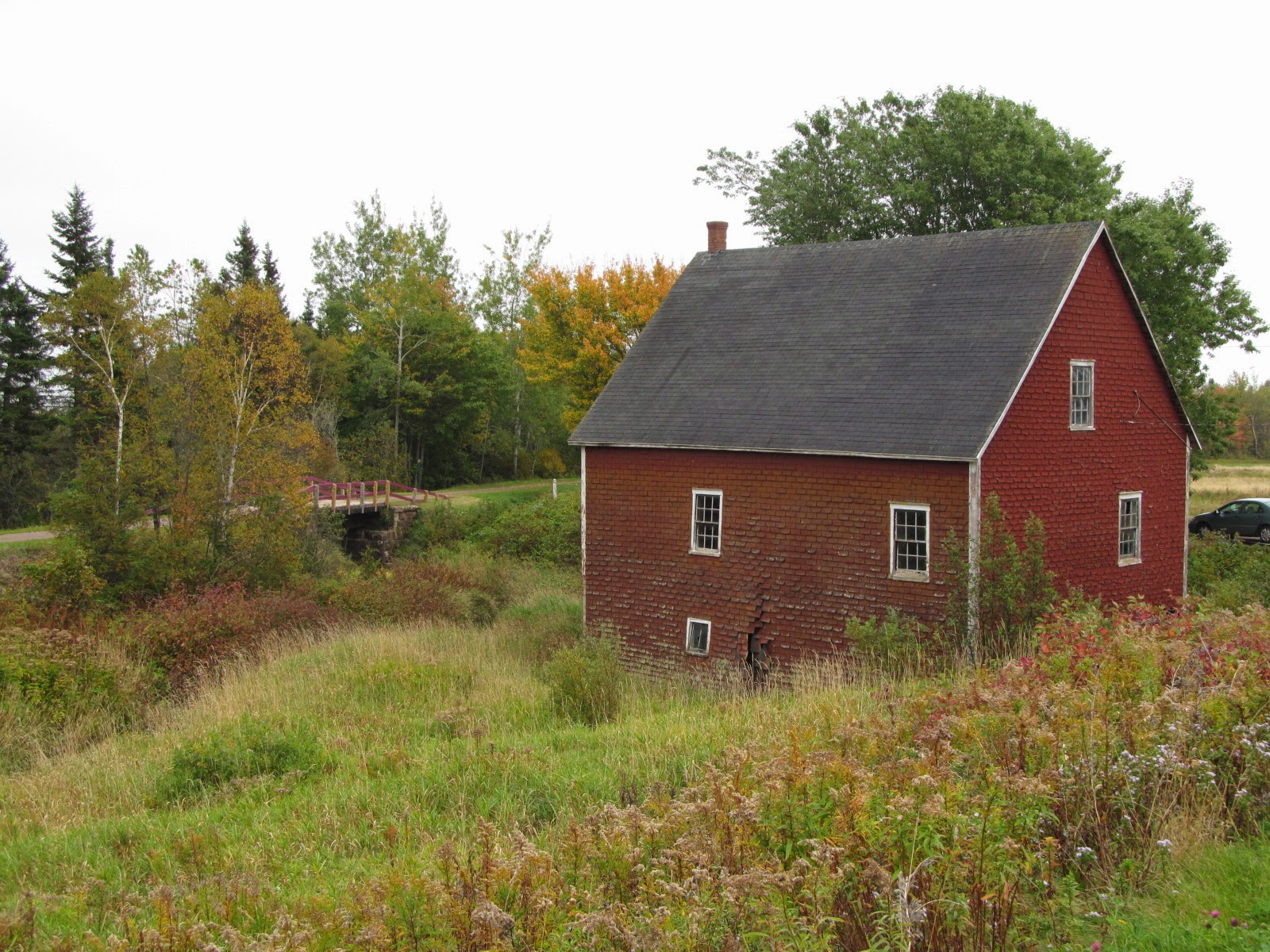 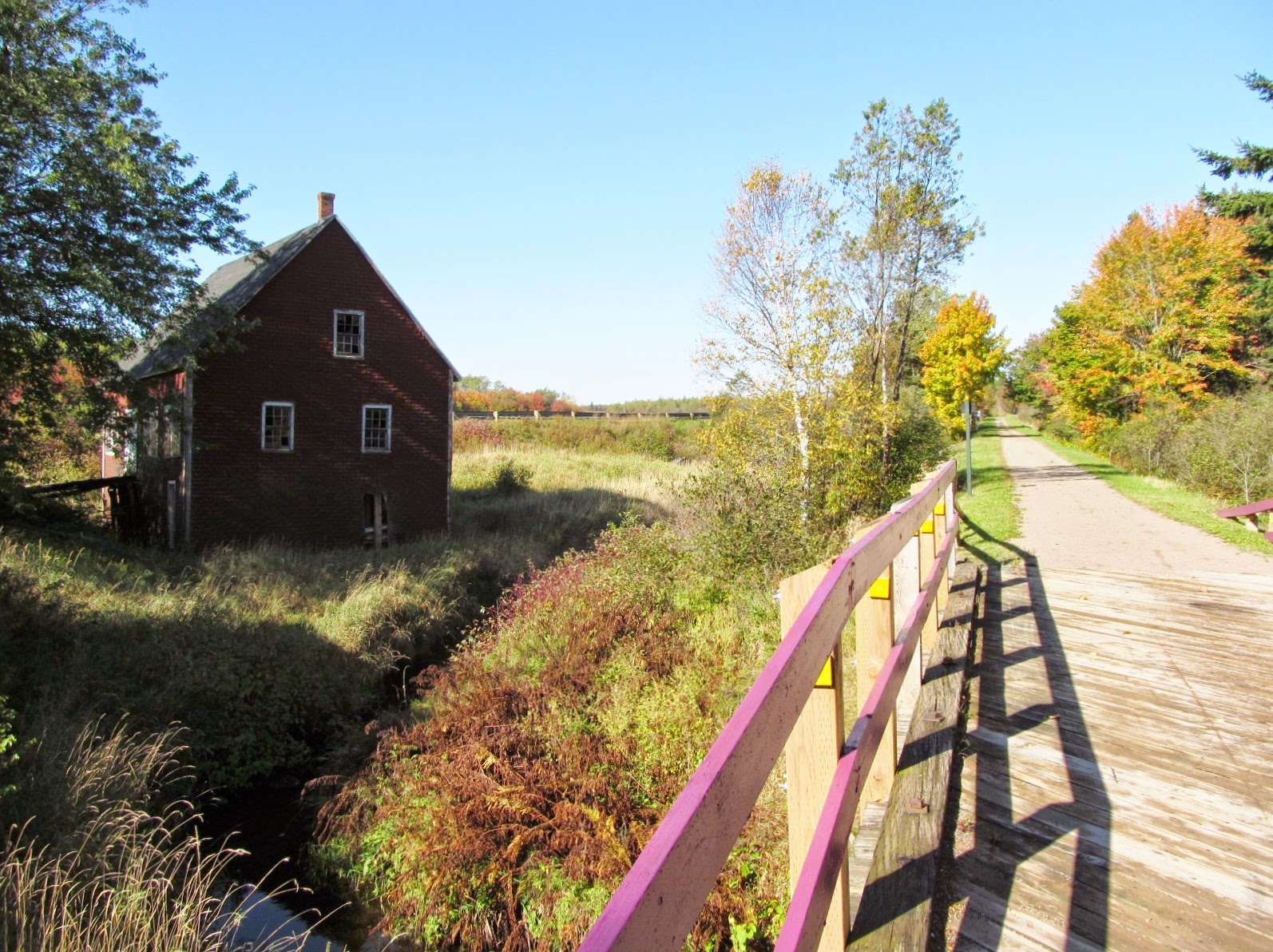 Posted by Carter W. Jeffery at 2:14 PM No comments:

Last Friday I was in Charlottetown and took these photos of the two historic buildings at the corner of Haviland and Water Streets. 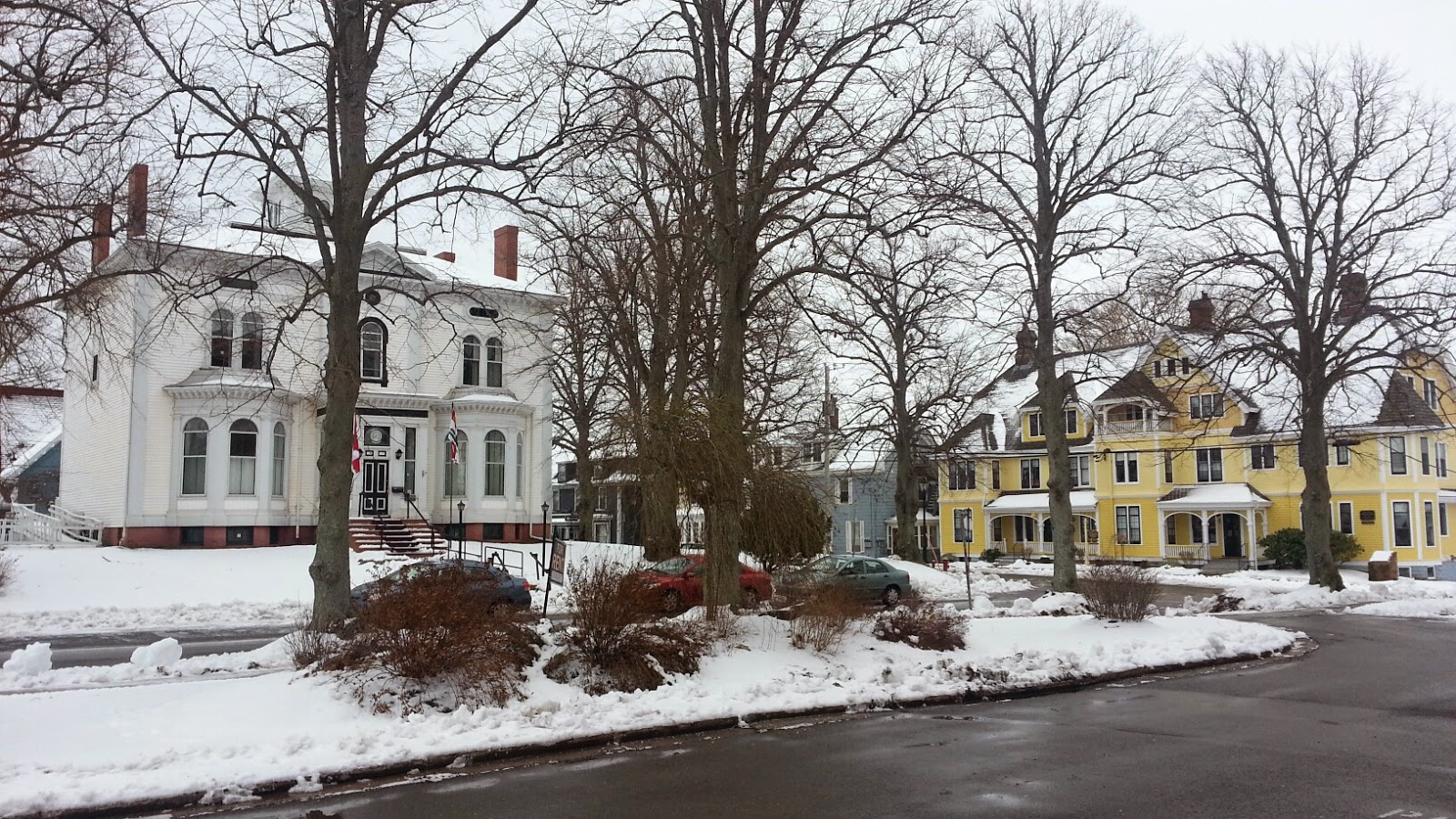 The large white house at 2 Haviland Street was finished in 1869 for the Lowden family - at the time local papers described it as "an architectural gem."  The house was used as the American Consul for PEI in the early twentieth century - today it is "The Haviland Club" (associated with the United Services Officer's Club) with memberships open to the public.
The large yellow building on the right is "Owen Terrace" at 2-6 Water Street and built in 1889 by the estate of Owen Connolly as a rental building overlooking Charlottetown Harbour.  In 1990 Owen Terrace was designated a National Historic Site describing it as a rare example of Queen Anne Revival architecture.  (information cf. www.historicplaces.ca) 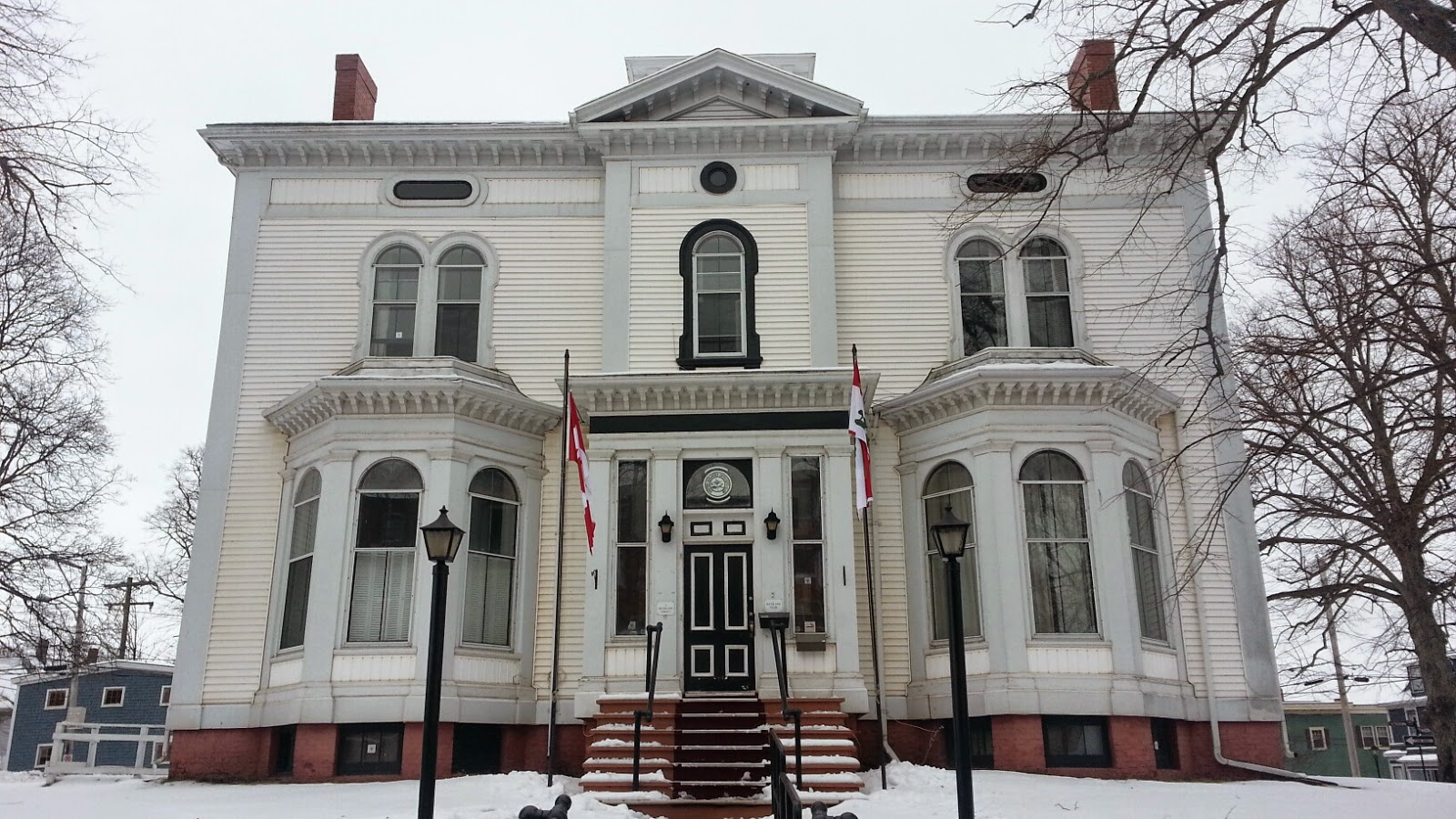 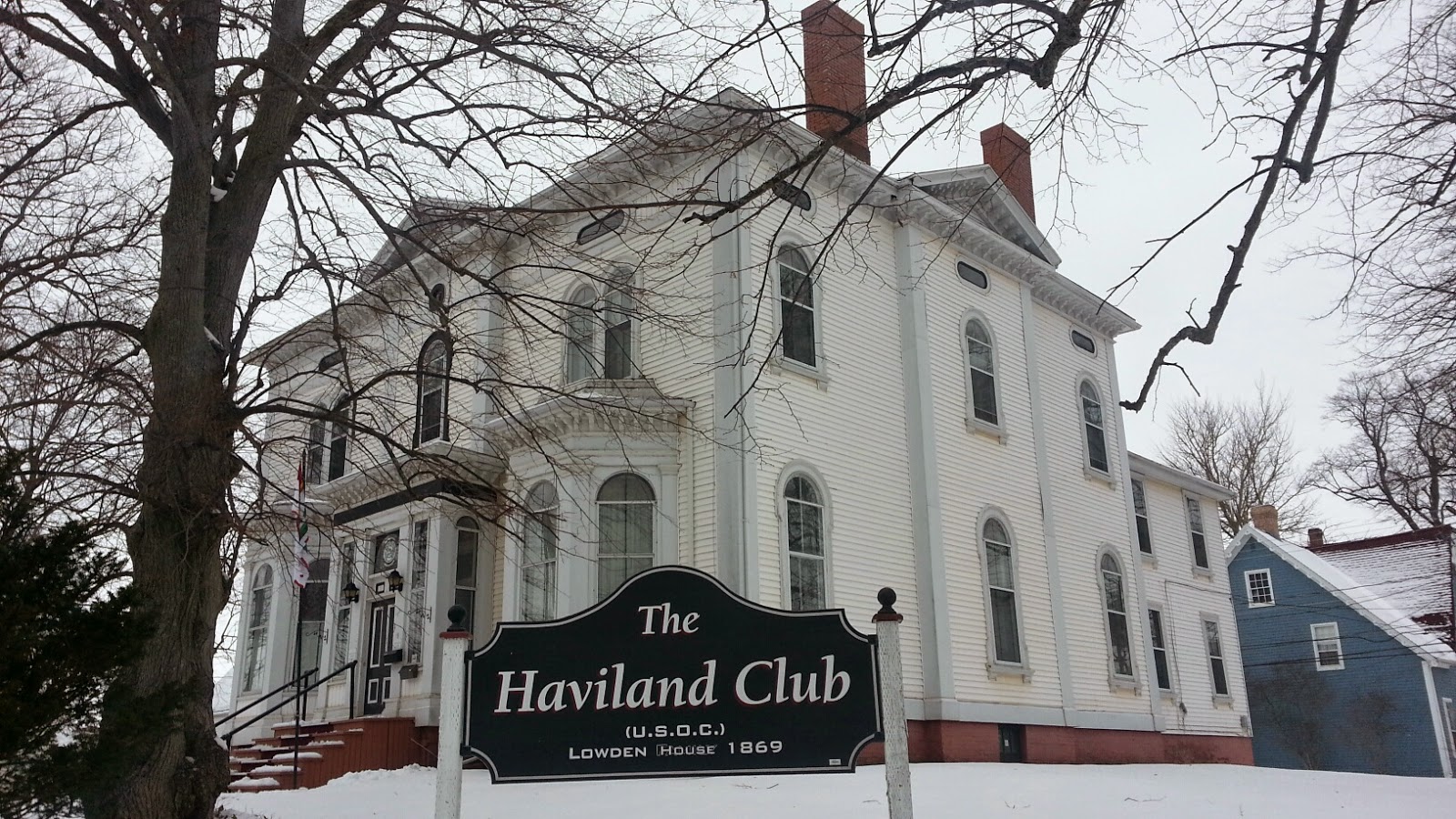 The following  about "Haviland Club" comes from the Historic Places website.
"The Haviland Club's heritage value lies in its association with the Lowden family, its association with the American Consulate and its grand architecture.  Esther Lowden, the widow of former tobacco merchant, George Fish Crow Lowden, built this home after the Great Fire of 1866 destroyed her home on Water Street. The home was rumored to be designed by Halifax architect, David Stirling, who favored the Italianate style of architecture. After her death in 1896, Lowden's son in law, LL Beer applied for authority to administer the estate, hence the home stayed in the Lowden and Beer families.
Soon after Lowden’s death, the home was leased to the American Consul for Prince Edward Island, Delmer J Vail. The home served as the American Consulate for many years. At one point in time, the American flag was likely to be the first flag seen upon entering the Charlottetown harbor. It flew from a thirty-foot flagpole set atop the belvedere. Following the closure of the Consulate, the home was rented to various tenants. However, in 1944, the residence was bought by the Army and Navy Club, later the United Services Officers' Club, to be used as a club. Since then, the club has been renamed the Haviland Club and has opened its membership to the public. The Italianate style, former residence is one of the grandest in Charlottetown. The home was built in the fashionable area of the time, called Dundas Esplanade. By 1869, the local papers were describing the home as an architectural gem." 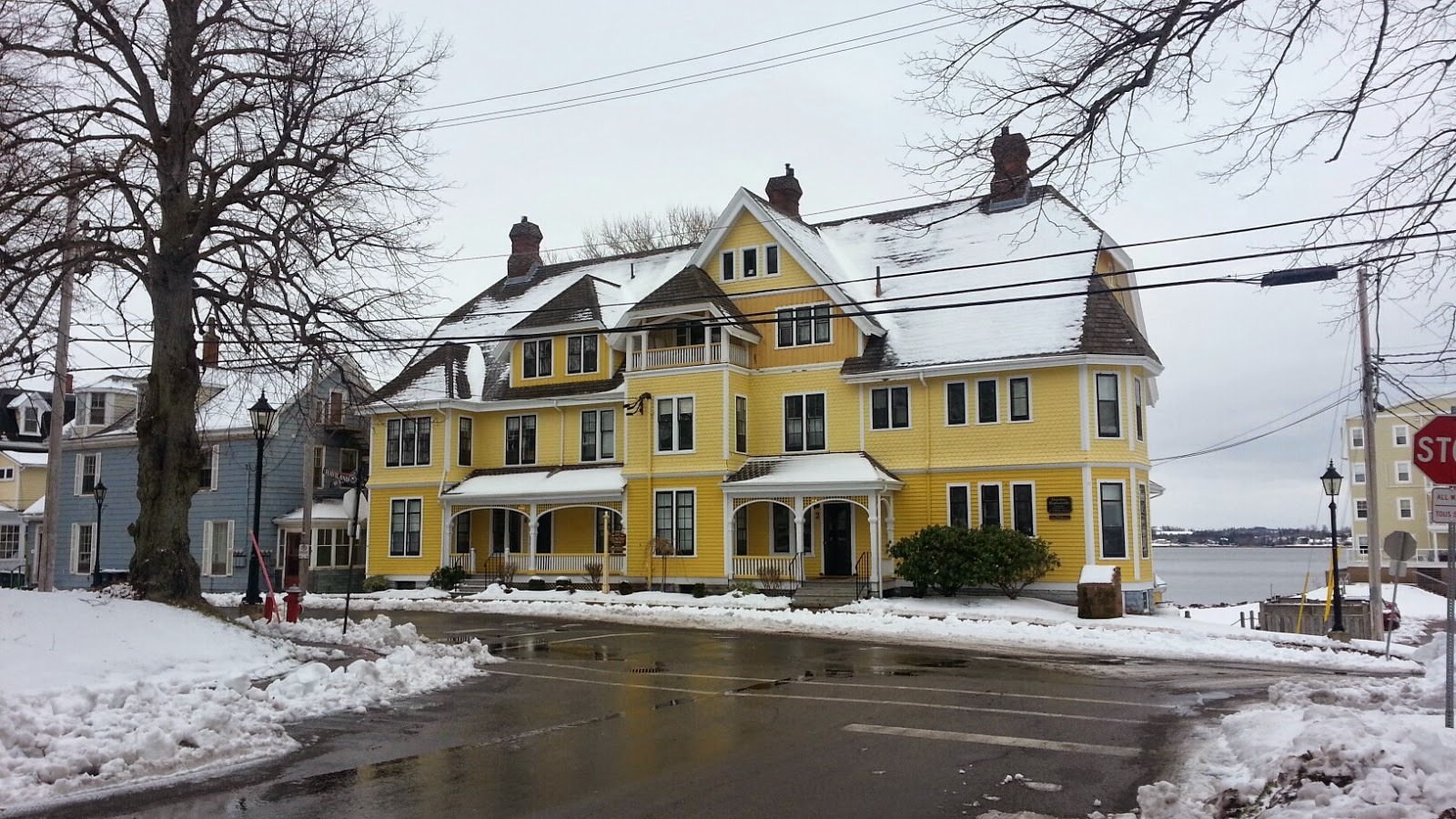 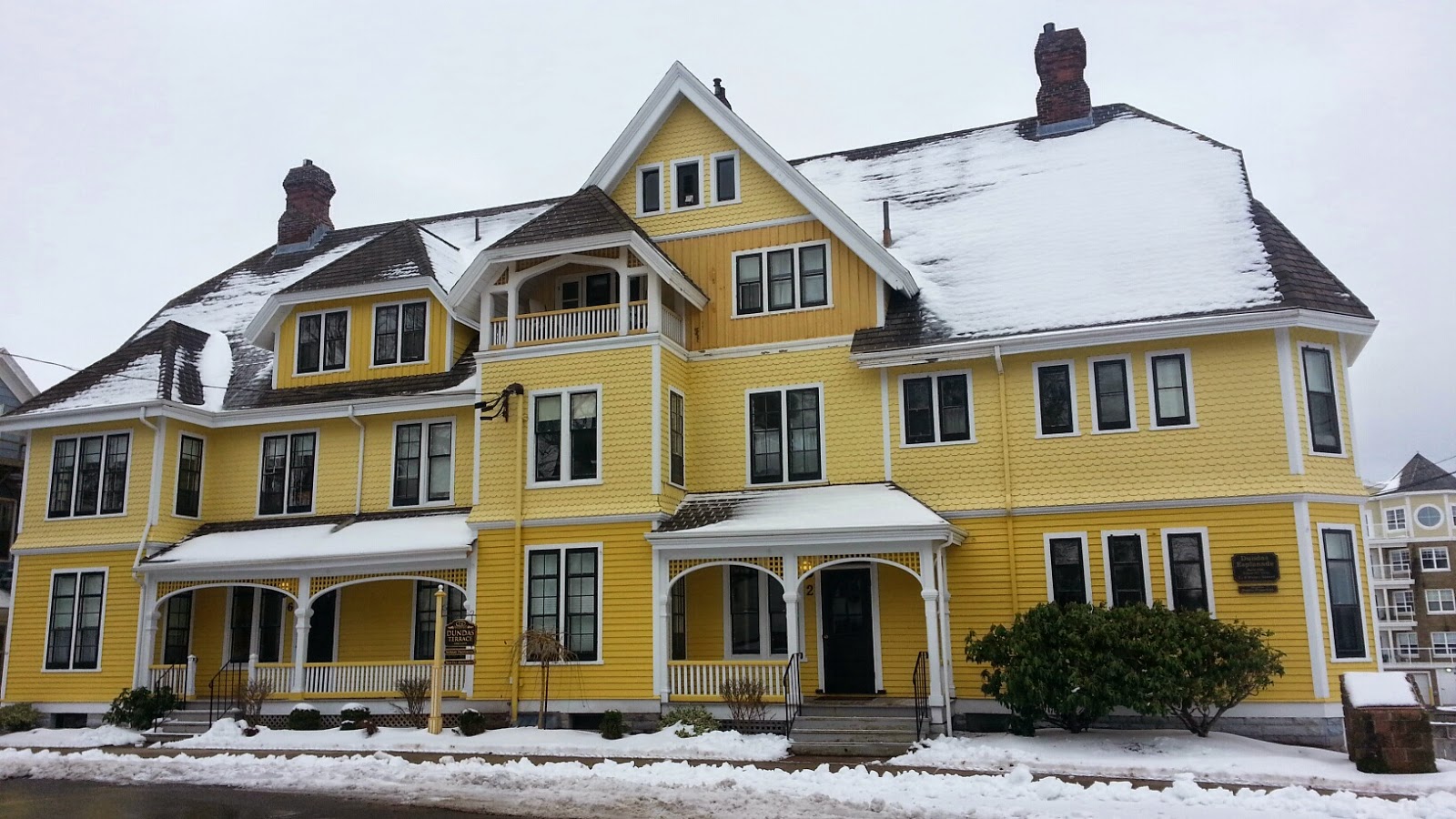 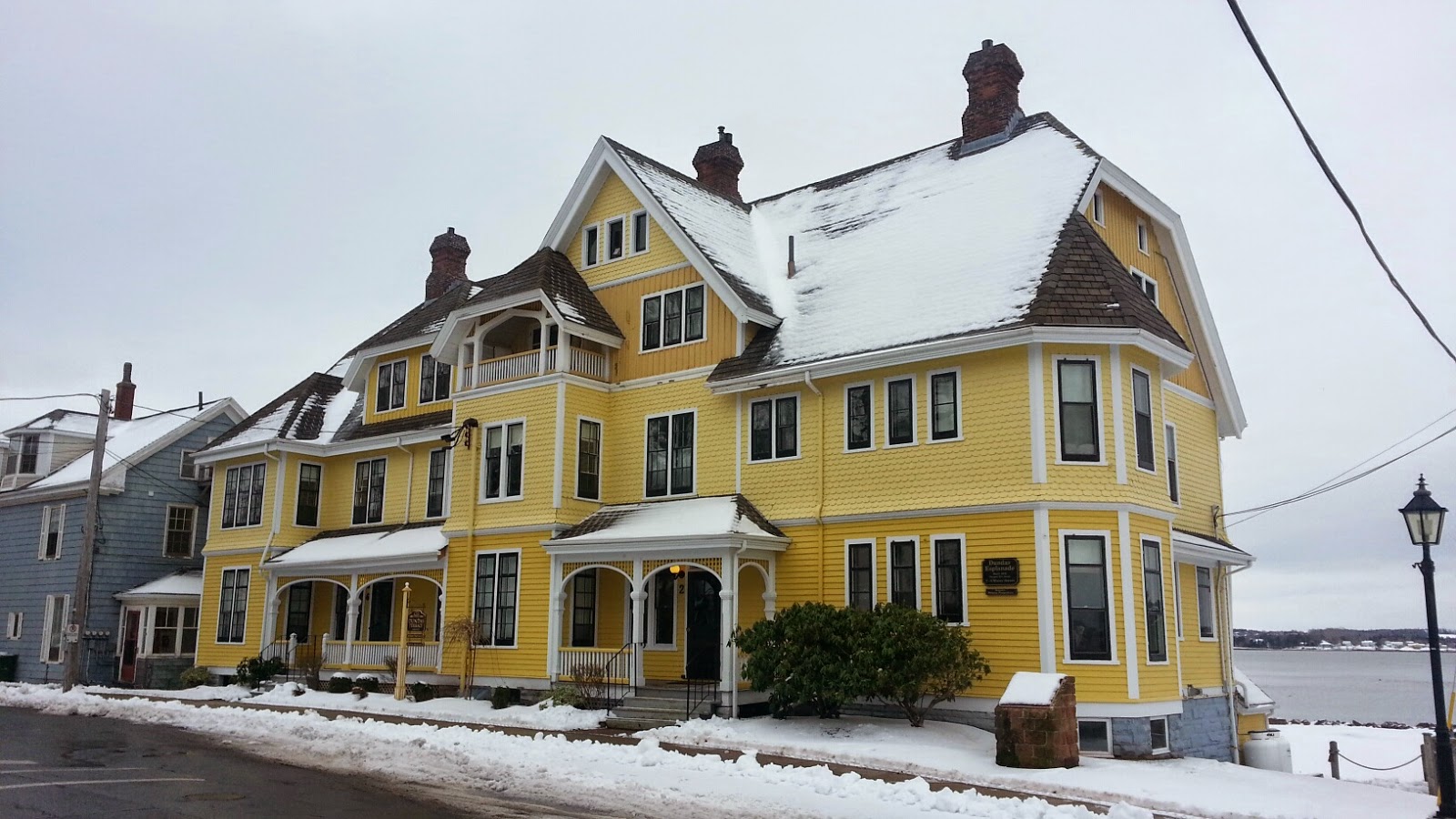 The following  about "Owen Terrace" comes from the Historic Places website.
“The heritage value of Dundas Terrace lies in its Queen Anne Revival style architecture, its association with the estate of merchant, Owen Connolly (1820-1887) and its importance in supporting the Water Street streetscape.  Owen Connolly was one of the most successful entrepreneurs of the late 1800s. His varied business interests left him a very wealthy man. Connolly was born in Ireland in 1820 but immigrated to Prince Edward Island in 1839, where he worked for the Smallwood Family as a farm laborer. Connolly eventually bought a farm of his own and soon after, opened a country store. His businesses multiplied and diversified making him one of the most successful businessmen in Prince Edward Island.  The Owen Connolly Estate executors were instructed to devote the remainder of Connolly’s estate “for the purpose of educating or assisting poor children, resident in Prince Edward Island, who are Irish, or the sons of Irish fathers...” The Estate was worth approximately 250 000 dollars. The Connolly Estate was involved in a number of investments including the construction and rental of buildings to provide continuing funding so that the Estate could carry on its charitable efforts. They have been very successful, as the Estate continues to offer awards each year. The Connolly Estate commissioned prominent local architect, William Critchlow Harris, to design Dundas Terrace. Unfortunately, there is some confusion as to who built the impressive structure. Records have survived showing tender bids were received from H. and S. Lowe, John Fennel and William Harper, however a hand written contract does exist stating that the work was to be done by H and S Lowe.  Dundas Terrace was built in the Queen Anne Revival style, a style that was somewhat subdued in Charlottetown compared to other provinces. The Queen Anne Revival style was popular in the late Victorian era. Richard N. Shaw (1831-1912), a British architect, created the style that incorporated some of the classical motifs popular during Queen Anne’s reign (1702-1714). Some distinctive features of the style include, very large asymmetrical designs, a variety of rooflines and complex detailing, all of which have been incorporated into the design of Dundas Terrace. The building is a rare example of a Queen Anne Revival style apartment building constructed of wood and was recognized for its uniqueness in 1990 by the Historic Sites and Monuments Board of Canada. The beautiful Queen Anne Revival inspired tenement has been extremely well maintained and its interesting cladding, which includes board and batten, shiplap and clapboard, have been restored.  The impressive building was originally named Dundas Terrace after Dundas Esplanade, a popular promenade that stretched along the breakwater to the west. It was also a fashionable building area of the 1870s with many large homes erected by the City’s more affluent citizens. The name Dundas came from the popular Lieutenant Governor, Hon. George Dundas (1819-1880). Dundas Terrace has more recently been named Dundas Esplanade in honour of the neighborhood and the promenade.  Some of the building’s more prominent tenants, according to McAlpine’s Prince Edward Island Directory, included the Father of Confederation, Senator and Lieutenant Governor, Hon. A.A. Macdonald (1829-1912), as well as druggist and composer of the music to Lucy Maud Montgomery’s “Island Hymn”, Lawrence W. Watson (1860-1925).  A huge presence on the west end of Water Street, the building is a very impressive sight.  Built on the waterfront, Dundas Terrace is vital to the Water Street streetscape and an important part, not only of Charlottetown's built heritage, but also the nation's."

Posted by Carter W. Jeffery at 8:32 PM No comments: