Below is the former Gerald Redmond House on Main Street, Alberton - the house has been long abandoned, owned by relatives away.
Some older Alberton residents recall this being a Matthews Home before Mr. Redmond.

Belcourt Centre, Rustico - slated for demolition by the Diocese

It has come to my attention this morning that Belcourt Centre on Church Road in Rustico will be demolished and replaced by the Roman Catholic Diocese of Charlottetown.
Belcourt Centre, originally built as St. Augustuine's Convent, was built in 1932 following the fire of the original 1888 convent.
It's urgent that as many people as possible express their shock and dismay to Bishop Grecco, The Diocese of Charlottetown, PO Box 907, Charlottetown, PEI  C1A 7L9. 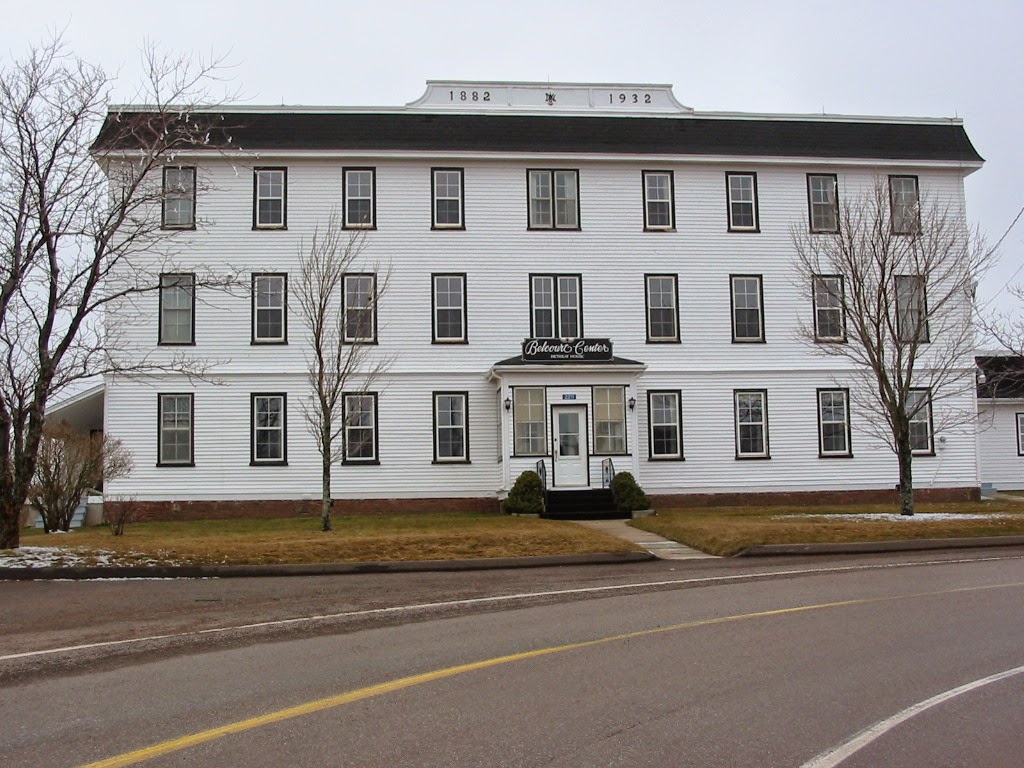 For more information about Belcourt Centre see their website...
http://dioceseofcharlottetown.com/diocesan-ministries/belcourt-spirituality-centre/
Posted by Carter W. Jeffery at 11:18 AM No comments:

There's been too many old buildings disappear on the Island this summer, including this old farmhouse on the Blue Shank Road in Kelvin Grove.  It was destroyed recently - probably by a "control burn" by the local fire department.
The old Cairn's house appeared on the covered of Saltscapes Magazine five years ago this month.

Below are photos I took yesterday, Sept. 22, 2014 of what's left of the house - the foundation with charred remains.   A few weeks earlier I noticed piles of clay behind the house - I suspected something was going to happen here as the house has been vacant for more than ten years. 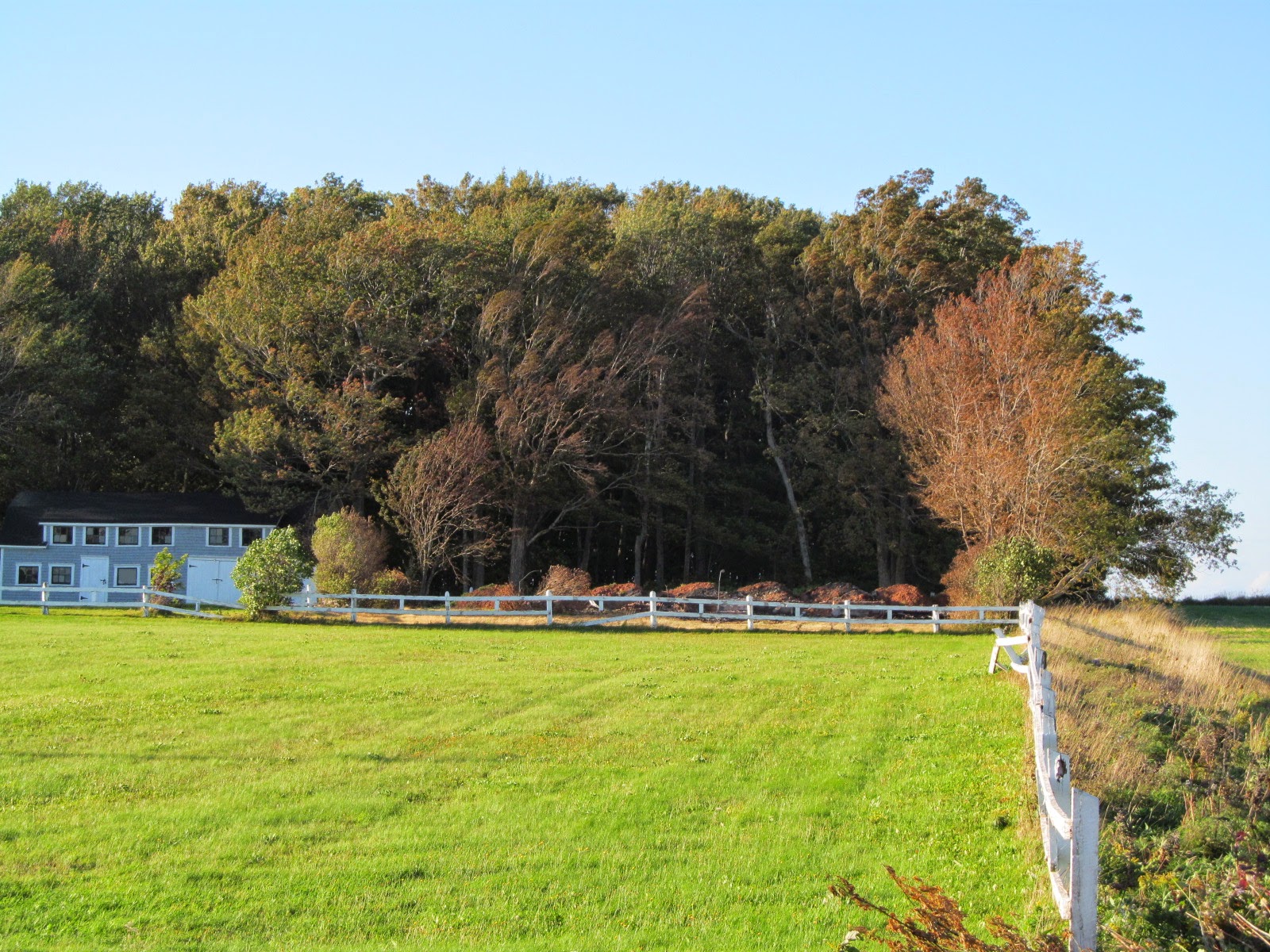 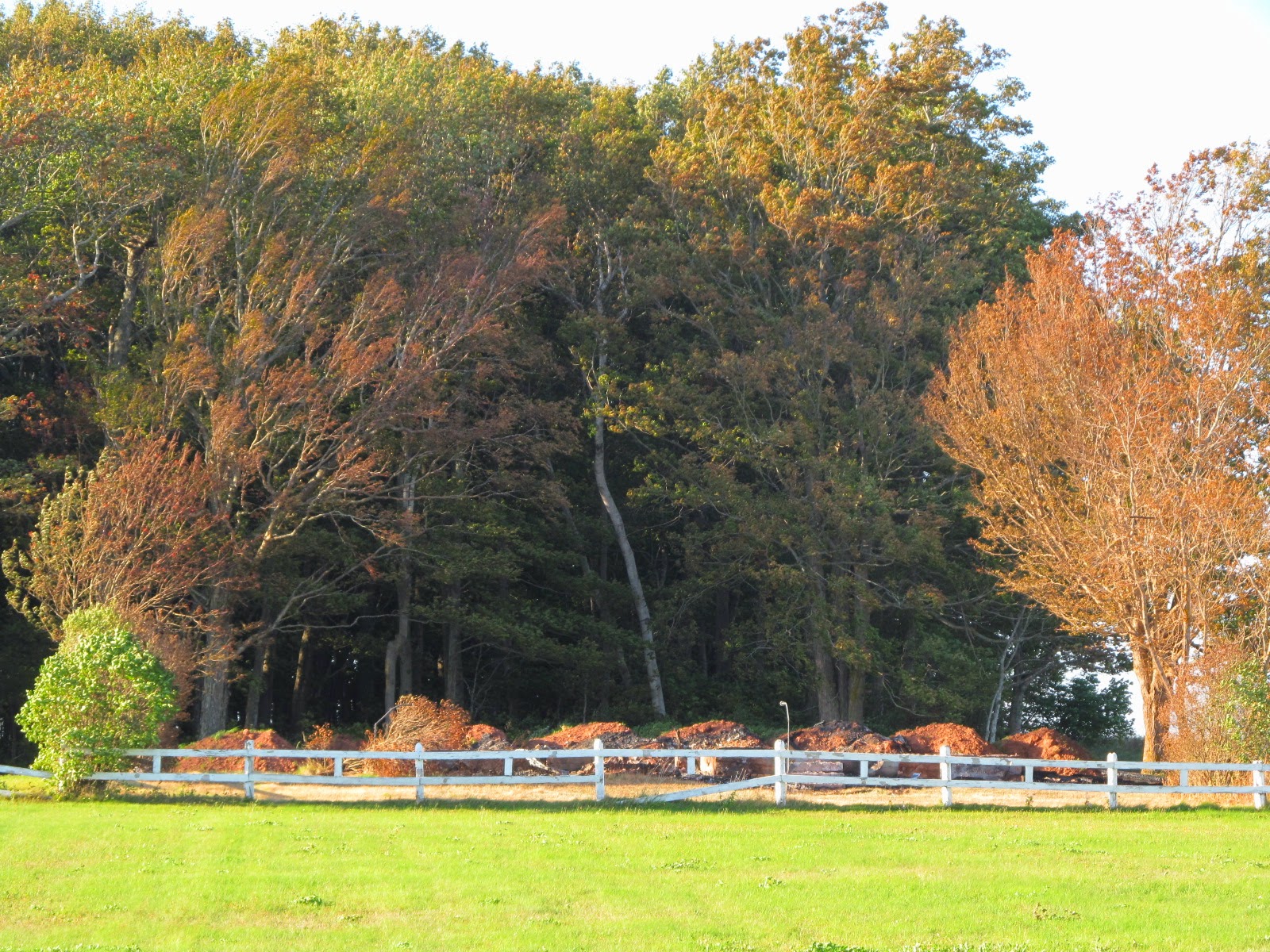 Below: all that remains is a small barn. 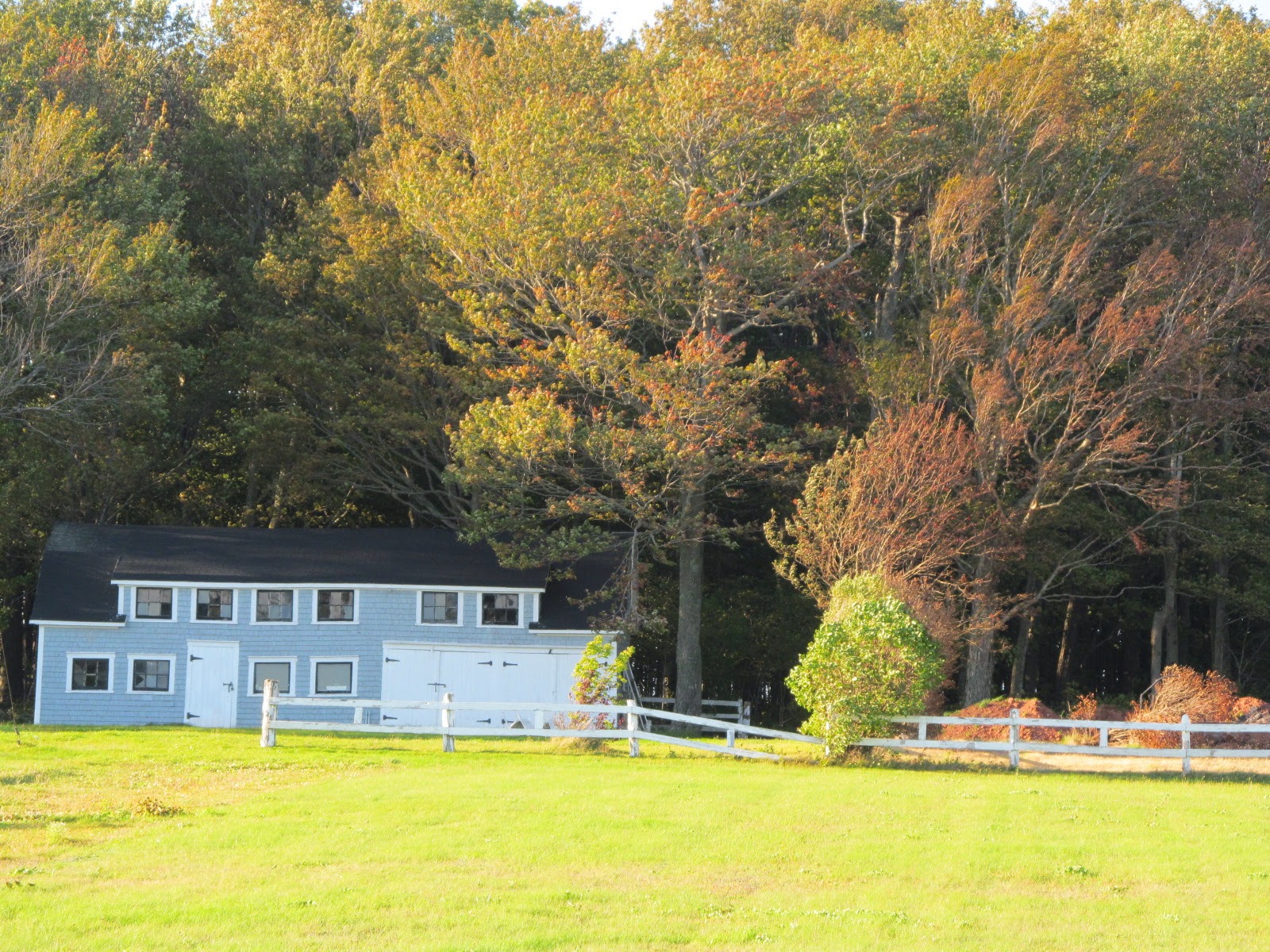 I took the following photos of the house on October 26, 2012 just after the large barn on the property was demolished - it had earlier been damage from high winds. 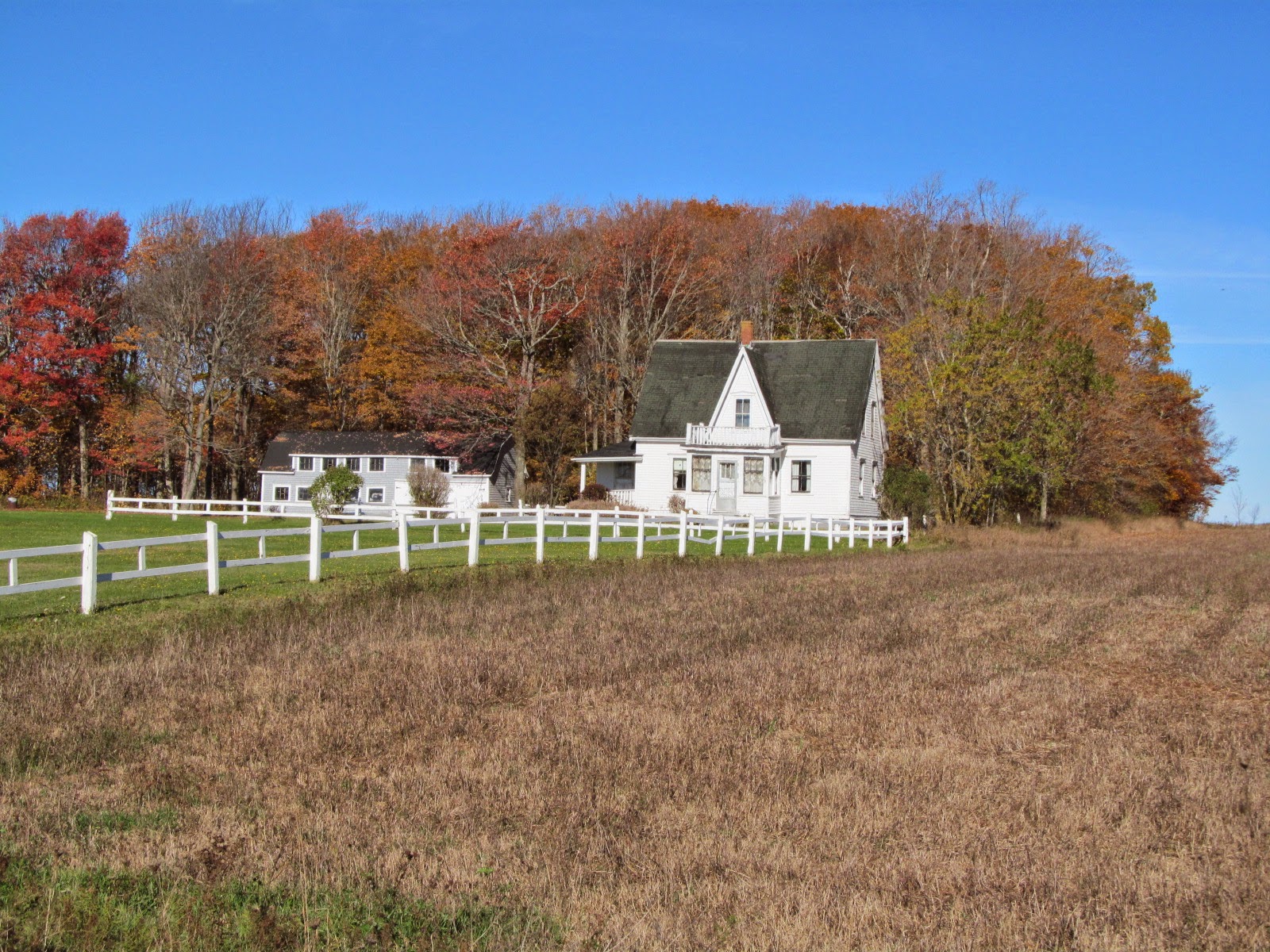 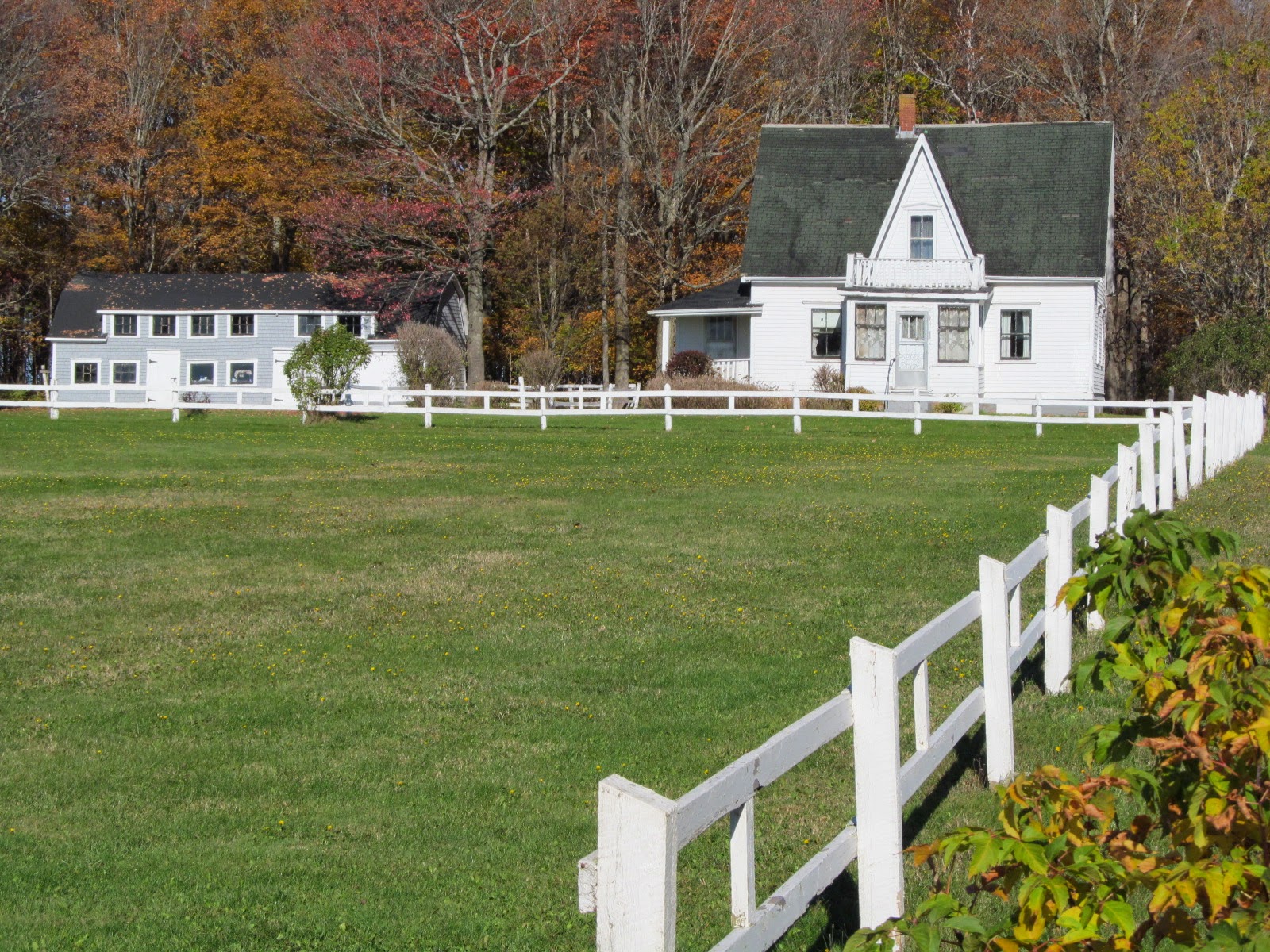 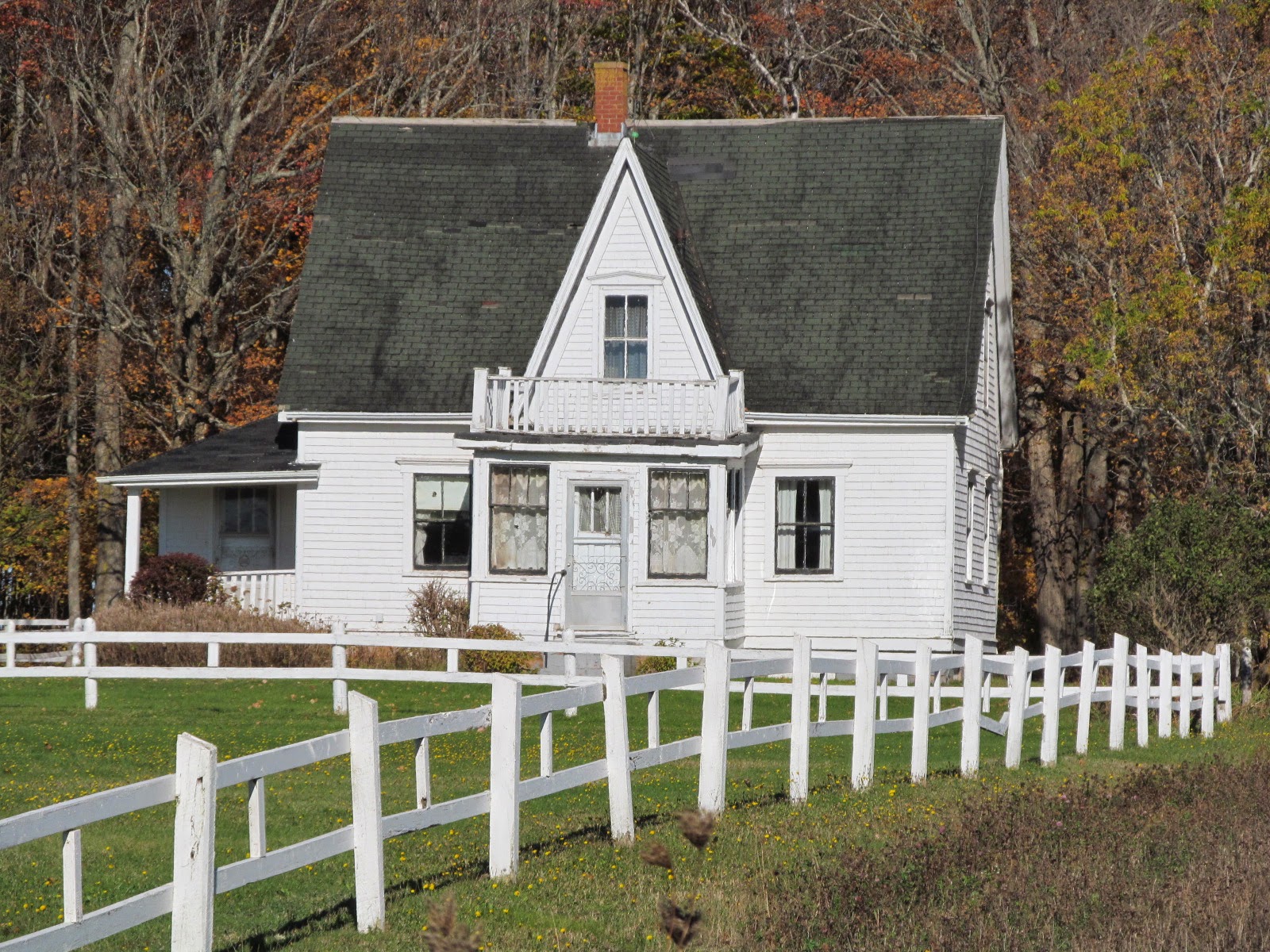 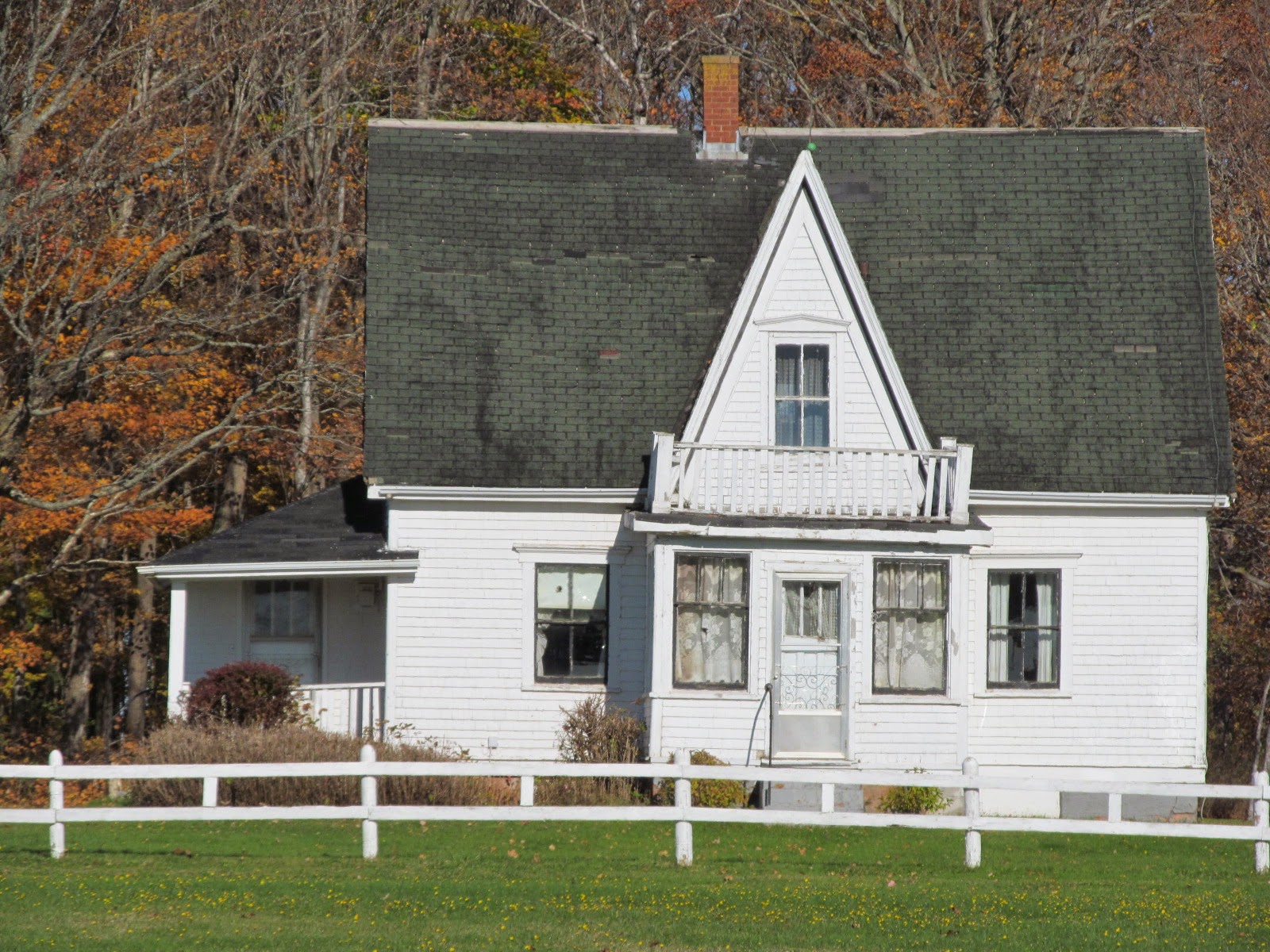 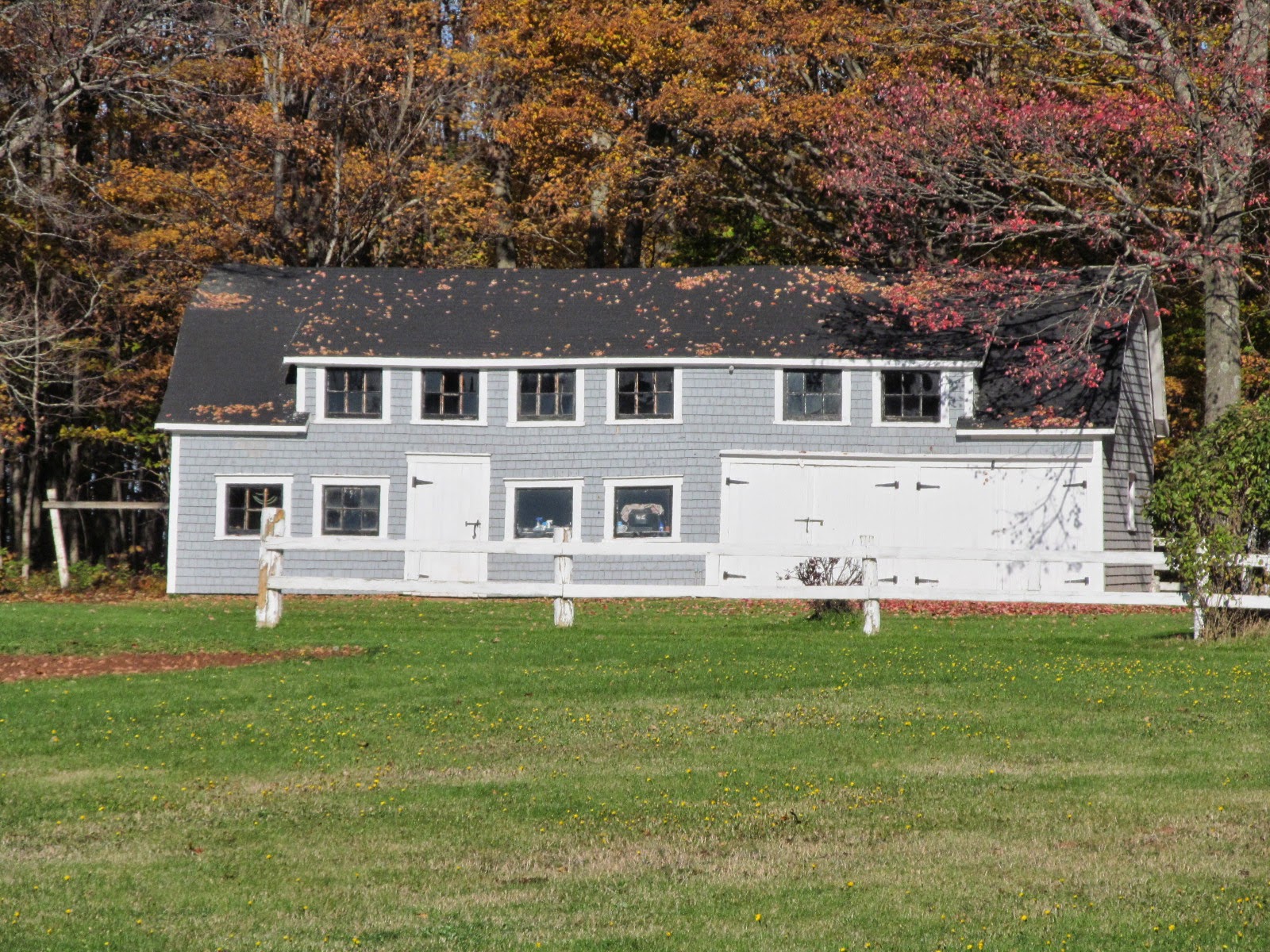 Posted by Carter W. Jeffery at 3:58 PM No comments:

Here's a recent article in the Guardian Newspaper telling of an exhibit about the archaeological dig of a mid-1700's Acadian home at Pointe-aux-Vieux ( near Gillis Point, Port Hill ).

© Guardian photo by Jim Day  ////  Helen Kristmanson, provincial director of aboriginal affairs and archeology, says her exhibit called Digging into the Past: An Archaeological Discovery in Malpeque Bay, is designed to give people “a window into the archaeological process.”
Archaeological discoveries provide glimpse into province's Acadian history
The find was tiny, but precious.
A turquoise glass bead inscribed with the capital letters IHS — the Greek Catholic monogram of the name Jesus Christ.
Along with the bead, four broken slivers from a reliquary pendant that are the size and shape of fingernail clippings now lie on a black cloth in a display case.
Helen Kristmanson calls the piece extraordinary. She holds it among the most cherished items unearthed in her big dig.
The person who owned it, she notes, would have been very disappointed to let it slip through her fingers.
“It has obviously such personal meaning for whoever lost it,'' she says. “I suspect this fell between the floor boards in the house.''
Many items were unearthed from the remnant homestead — a small rectangular house with an oven fireplace — that was home to the pendant for hundreds of years.
Kristmanson, the provincial director of Aboriginal Affairs and Archaeology, marvels over many of the personal belongings and objects associated with an Acadian family that settled in Malpeque Bay in the early to mid-18th century.
She and her team dug up more than 20,000 artifacts during archaeological investigations conducted between 2008 and 2011 at Pointe-aux-Vieux, a pre-Deportation Acadian site near Port Hill. Among her favourite finds are little straight pins used in sewing.
A “wow factor'' discovery is the gun plate that has the outline of an owl with Goddess Athena on its chest. The item, likely a decorative plate, was found right at the bottom of the site.
“A really exciting piece,'' Kristmanson enthuses.
Another interesting discovery — there was no shortage, for sure — is a lead seal. Two discs are fused by a strip in the middle and used to clamp onto a bolt of fabric with a rampant lion carved on one side and cryptic symbols appearing on the other.
Collectively, the dig has brought to the surface an informative and intriguing glimpse into Acadian history on Prince Edward Island.
“It was an extraordinary dig,'' says Kristmanson.
“I think that this site will make a valuable contribution to our knowledge of pre-deportation Acadian life in Prince Edward Island.''
She believes one of the key messages that comes out of the archaeological record of the site is that the pre-deportation Acadians in P.E.I. enjoyed a comfortable life.
“Their diet was varied,'' she notes.
“They had access to utilitarian goods, some luxury items. So they were doing well there.''
A rich faunal assemblage was unearthed at the site.
The thousands and thousands of animal bones dug up and dusted off speak to the hearty Acadian diet.
They were keeping livestock such as cows, pigs, sheep, chickens and goat. They supplemented their diet with game like showshoe hare. They also ate shellfish, shorebirds and other birds.
Many of the animal bones are on display along with numerous other artifacts from the dig.
Called Digging into the Past: An Archaeological Discovery in Malpeque Bay, the display officially opened earlier this summer at the Acadian Museum in Miscouche.
The exhibition displays the 18th century artifacts, interpretive panels and interactive stations to immerse visitors in this important period of Island history.
The public's response to the exhibit to date has, for Kristmanson, been quite heartwarming.
“It's been overwhelmingly positive,'' she says.
“The project has received such support from the Acadian community.''
One woman from Massachusetts, who is actively involved in genealogy, told Kristmanson that the exhibit was life-changing and a highlight of her trip to P.E.I.
When the exhibit closes in January, the artifacts will be accessioned into the P.E.I. Museum and Heritage Collection.
Kristmanson hopes to publish on her findings within the next six months.
For now, the exhibit is one way of sharing her findings with the public.
“This site has been a very, very special site for me — it's quite a magical place,'' she says of the dig at Pointe-aux-Vieux, which is now designated as a protected site under the Archeology Act.
“This work feels so worthwhile,'' she adds
“People appreciate learning about their past. They appreciate learning about their history.''
AT A GLANCE
Fast facts
Viewing hours: The exhibition Digging into the Past: An Archaeological Discovery in Malpeque Bay will be on display at the Acadian Museum in Miscouche until January. The museum is open daily from 9:30 a.m. to 7 p.m. For more information, call 902-432-2880.
About the dig site: The Malpeque settlement was founded in 1728 by Pierre Arsenault II, his adult son Charles, and their companion Jean Lambert. Over a period of 30 years, other Acadian families arrived, working together to build a community. By 1752, the Malpeque settlement had grown to include over 32 households and over 200 people.
Project support: The exhibition was sponsored by the P.E.I. Museum and Heritage Foundation with the collaboration of the Association of the Acadian Museum. Major funding was provided by P.E.I. 2014 Inc. with a contribution by Canadian Heritage as well as donations by several Islanders.

I've been noticing this place the past few years, first the lawns weren't cut then a window was broken and last winter a curtain waved in the wind all winter.
This was the home of Lemuel and Janie (MacKinnon) Gamester, located on the Bungay Road (Rte. 251) in Hunter River.
Cumins 1928 Atlas of Prince Edward Island shows Geo. Gamester living here with 97-acres of land (in two parcels of land) - it notes his wife Janie and their children, Guy, Arthur, Viola and Lemuel.
Meachams 1880 Atlas of Prince Edward Island shows these two parcels of land belonging to Jno. Hickox and Pat Hughes. 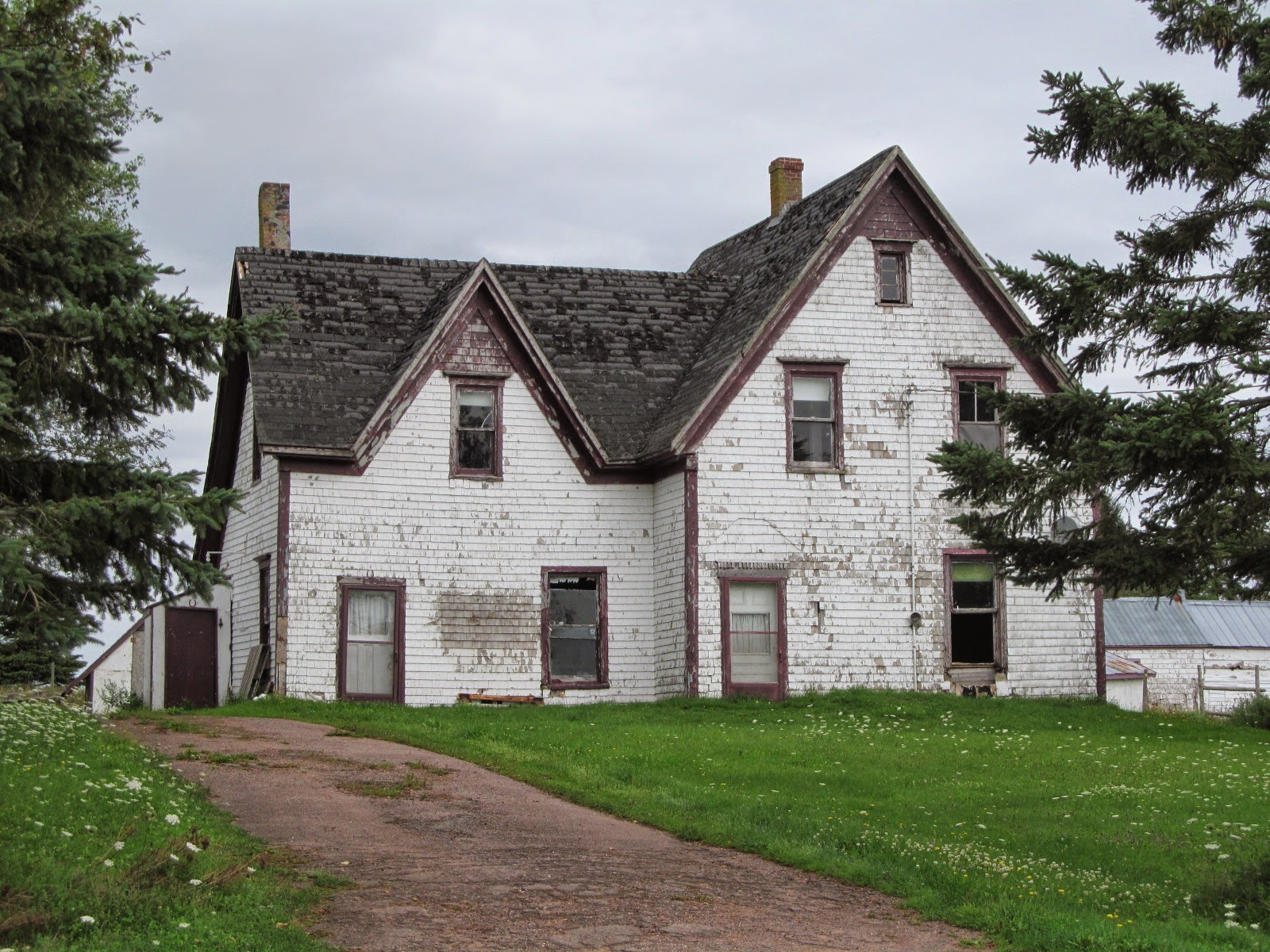 The house is an Island-ell style farmhouse. 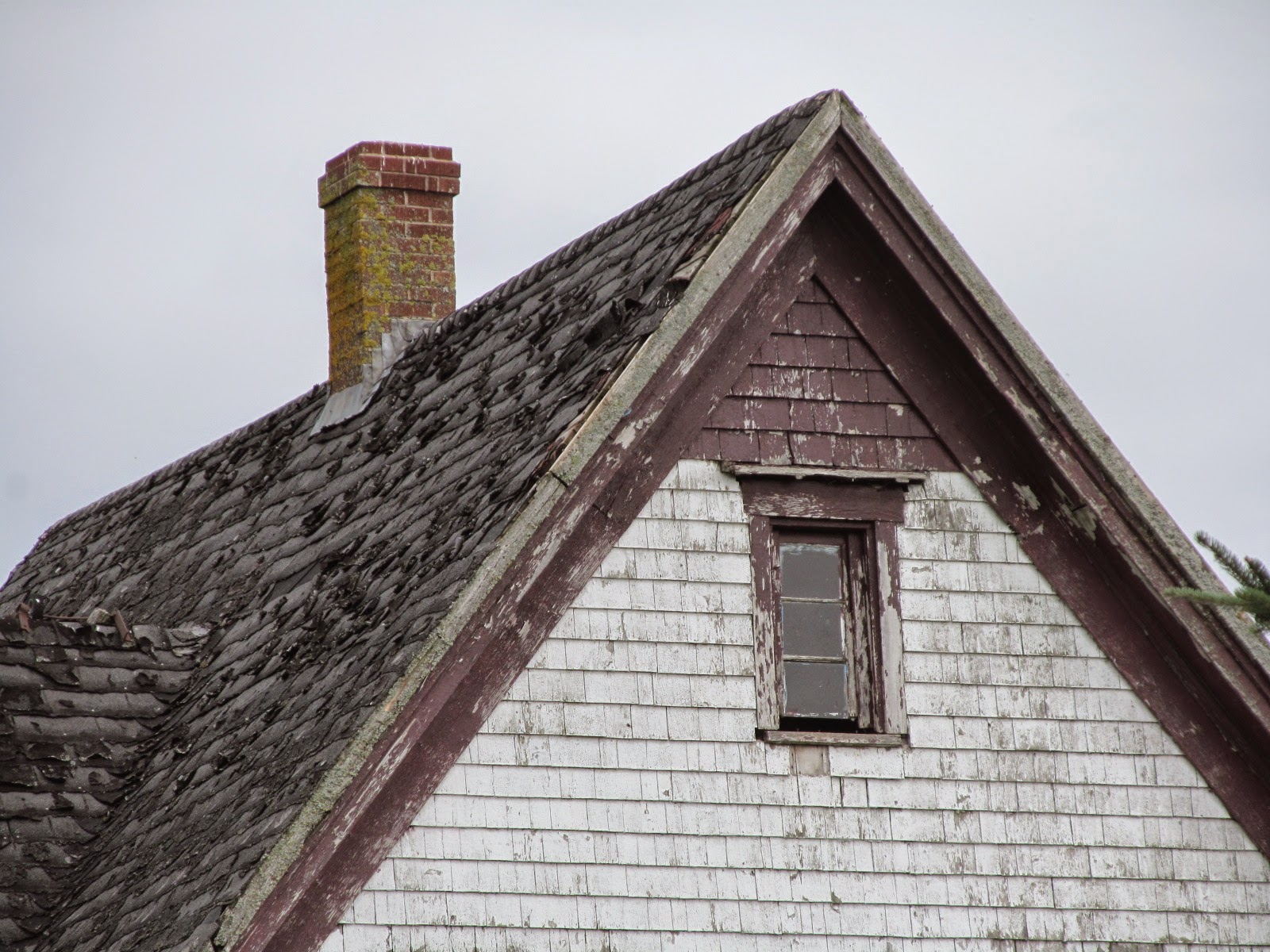 Posted by Carter W. Jeffery at 4:40 PM No comments: