Further to my post of August 21, 2012 when news was circulating of the sale and uncertain future of the Senator Donald Montgomery House (grandfather of L.M. Montgomery) - today's Journal Pioneer tells the story of his great-great-grandson Paul Montgomery plans to turn the house into a Bed & Breakfast.
Here's my previous post...

© Nancy MacPhee/Journal Pioneer.  April 14, 2016
Paul Montgomery stands outside what was the home of his great great-grandfather, Senator Donald Montgomery, who was also the grandfather to acclaimed author L.M. Montgomery. Paul and his wife, Michelle, are restoring the home, the inspiration for Anne Shirley’s marital house, Ingleside, into a bed and breakfast and country inn.

Now, the three-storey 19th Century wooden-clad home is under renovation, its doors to open later this year to visitors and fans of Lucy Maud Montgomery.  It served as a setting in her books “Anne’s House of Dreams”, “Anne of Ingleside”, “Rainbow Valley’, and “Rilla of Ingleside.” Paul Montgomery and his wife, Michele, are renovating the home build by his great-great-grandfather, Senator Donald Montgomery, also Lucy Maud’s grandfather. They purchased the ancestral home in 2014. “It was in quite a state of disrepair,” admitted Paul. “We’ve put a new foundation in, stripped walls down right to the bare studs.” The famous author, his “first cousin twice removed,” spent a great deal of time at the home and drew inspiration from within its walls. It was on the dining room mantle, now stored until work is complete, that Gog and Magog, those green-spotted China dogs L.M. first wrote about in “Anne of the Island,” sat, peering down at guests during Sunday dinners. Paul said the home, situated near the Lake of Shining Waters in Park Corner, was considered grand in its day, taking three to four years to construct. Over the kitchen and dining room are three bedrooms that were the servants’ quarters when the senator resided in the home. The serving window, where, after Donald rang his bell, food was passed from the kitchen to the dining room, still remains and will be preserved. The home has been passed along through the family, bought and sold several times, but always staying with a Montgomery. In the 1970s it was operated as a tourist home by Paul’s grandmother. In the 1980s and ‘90s, his father, Robert, acquired the ancestral home. It was operated as Montgomery Tourist Home then Montgomery Manor with its last incarnation being the Lucy Maud Montgomery Heritage Museum. “We are going to operate it as a heritage bed and breakfast, country inn and the name of the property, when we finish, will be the Montgomery Inn at Ingleside,” said Paul. “It has been a huge undertaking.” He is amazed by the home’s structure, and how well it has stood the test of time. “Where ever there is a window there are actual six-by-six (inch) posts that go from the foundation right up to the attic,” added Paul. “When we redid the roof last year, there were boards that were 24-inches wide, hand-hewn boards.” At first glance as one walks into the door, it’s obvious a lot of work has to be done. There are holes in some walls and Gryproc replacing others. Decades, if not century-old, wallpaper — if it can’t be salvaged — must to be stripped.
Unique features, like hand-painted scrolling on wooden doors, will be preserved, and a mindful eye — and hands — used to ensure the home’s integrity maintained. Paul is confident the work will be complete by for August.  He has been posting progress updates on social media. The project is “a labour of love,” one aimed at sharing his family’s history. “Preserving the history of the site is our main goal.” 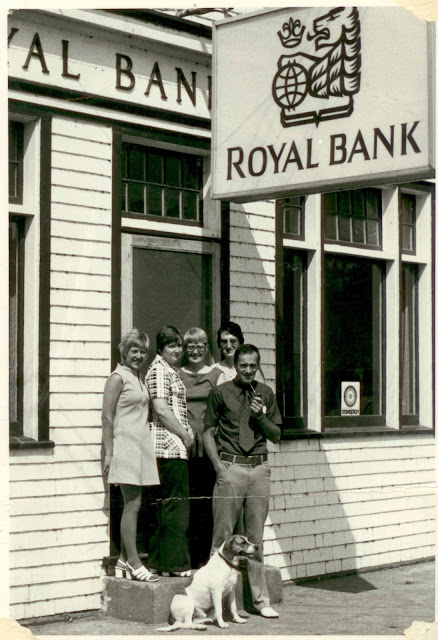 Above: Charlie Goodwin and Staff with the bank's dog. 1974 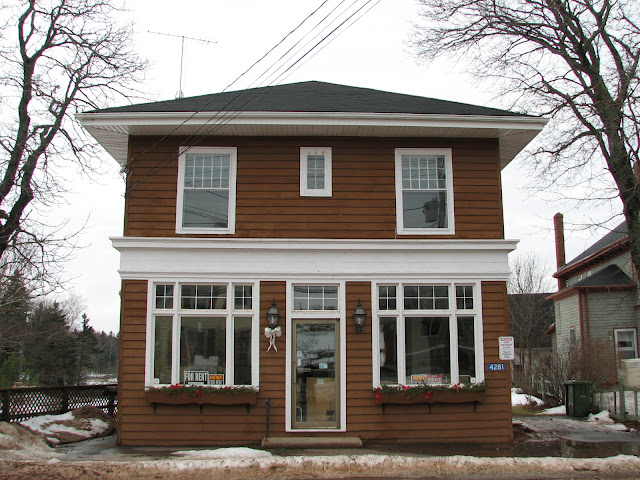 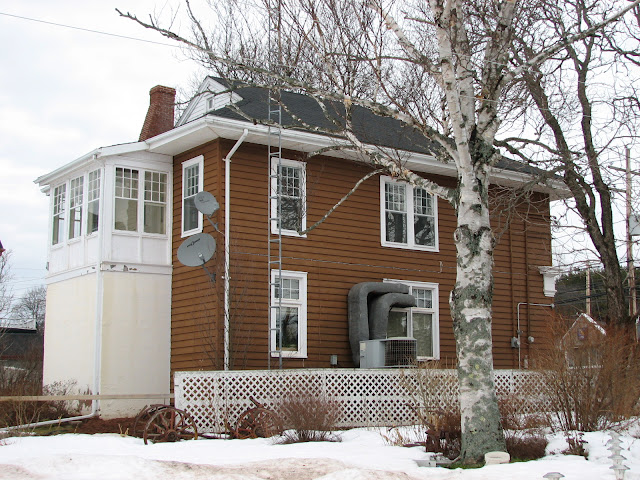 Owners of the Royal Bank Building:
The Royal Bank of Canada came to Hunter River in September 1913 and operated from the house of Hedley Spence until this new building was constructed and opened in 1918.
The Royal Bank operated at this location from 1918 to 1976.
The bank manager had an apartment upstairs.  The last bank manager to live here was Charlie Goodwin who kept his horses in the backyard.
The present Royal Bank of Canada opened across the street in 1976.  The new bank was built on the property of Percy & George Boyle.  The old Royal Bank building was traded for the land where the new bank sits.
The building was rented as a commercial space housing a craft shop, etc.
Bob Storey, Realtor purchased the property and rented it as a Constituency office to Mel Gass.
Catherine Calbeck purchased the property and used it as a parliamentary constituency office.
Ewen Taylor, the local pharmacist who was renting space next door from the Noye’s, moved the pharmacy to the old bank in 1988.  He rented it for three years then purchased the building in 1991.  In 2006 the pharmacy moved across the street to the new medical centre.
In the fall of 2006 Mr. Taylor sold it to be used as a private residence.

Information comes from interviews as well as from the “History of Hunter River 1767-1967” by Hunter River Women’s Institute.  Page 32:  The Royal Bank of Canada. 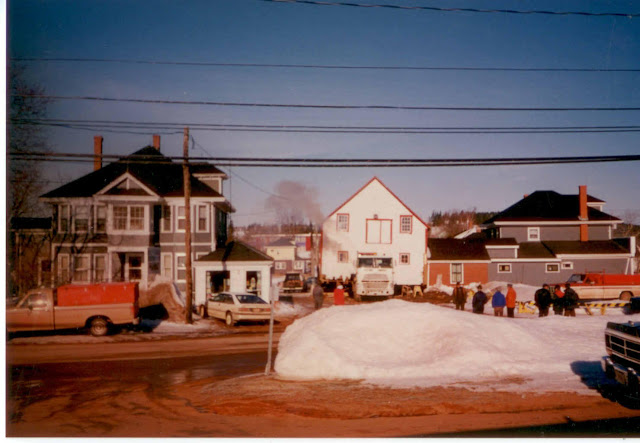 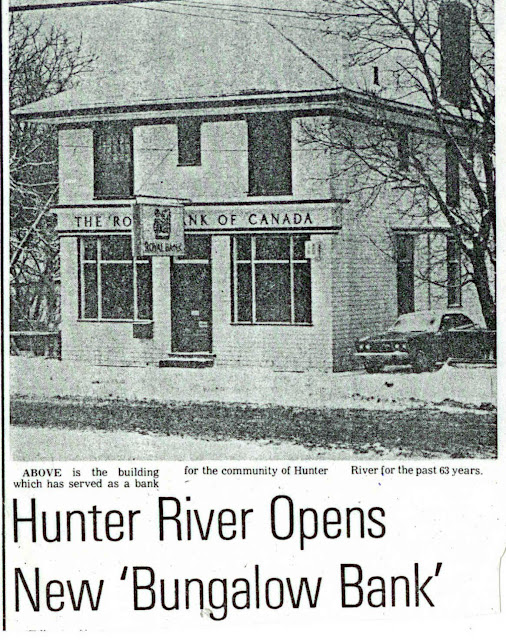 Well known heritage activist Mark Gallant of North Rustico gave this new bank it's title, "Bungalow Bank" - he was outraged that they tour down historic buildings, including Cardinal McGuigan's birthplace, to make way for this sleek new modern bungalow bank! 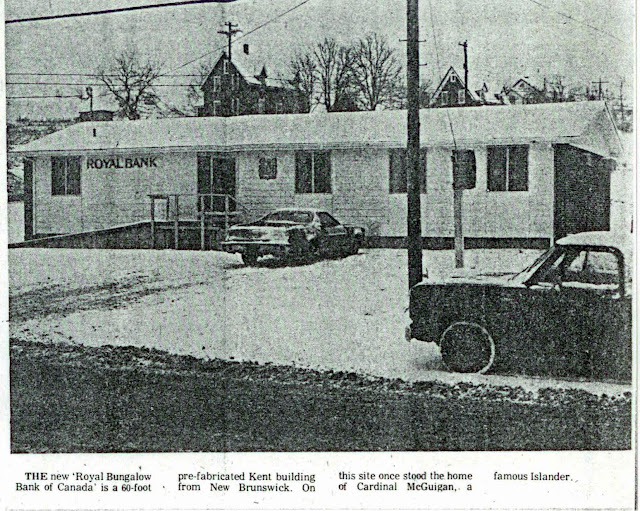 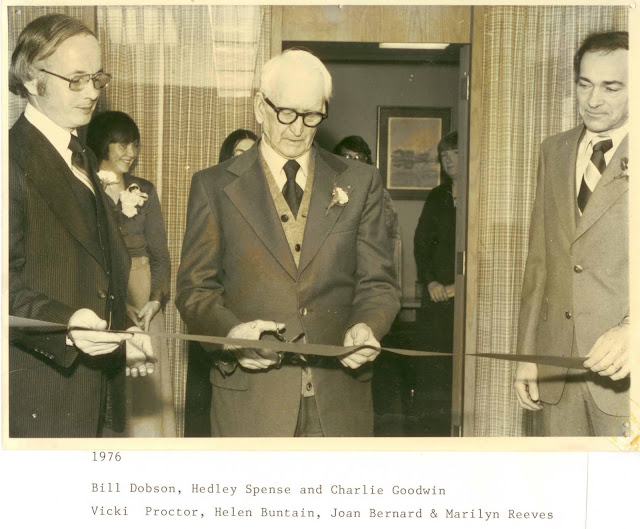