It's amazing the slant we have to resort to to these days to save heritage buildings, ie: the immensely important Leard's  Grist Mill in Coleman.  It's a threat to fish?!   We can't use the argument that it's one of the last intact grist mills left on the Island (from inventory of over 340); or that it's one of three or four grist mills left in the Maritime Provinces?
Thank you to local MLA Robbie Henderson for bringing the mill to public attention!!! With help from our Island government the folks at the Canadian Potato Museum will save this mill for generations to come. 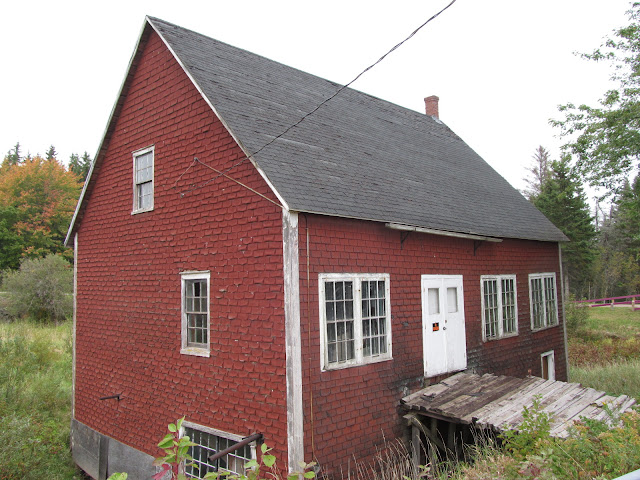 The following cf.
http://www.cbc.ca/news/canada/prince-edward-island/historic-leard-s-mill-threatens-p-e-i-river-1.3119680
HISTORIC LEARD'S MILL THREATENS P.E.I. RIVER
Rain Storms caused structural damage to heritage building.
CBC News PEI - June 19, 2015
A historic mill in western P.E.I. is on the verge of collapsing into a river, polluting it with the potentially toxic materials used to build it.   Leard's Grist Mill in Coleman, currently owned by the P.E.I. Potato Museum, was built in 1888 and continued operating until 2002. Local MLA Robert Henderson told the legislature Thursday last fall's heavy rain storms severely damaged the building. Henderson said there is now a risk it will collapse into the river, which could be a hazard for fish populations.  He said the Potato Museum has applied twice for government funding to stabilize the structure.  "Regrettably their request was denied," he said.   "Can the minister work with his colleagues responsible for these two programmes and attain the necessary funds to avert an environmental catastrophe in the Trout River?"  Environment Minister Robert Mitchell said he wasn't aware of the Potato Museum's application, but he will do what he can to avoid any potential hazard.  "Definitely willing to commit to work with the member and any other departments that we may be able to assist with the community and with the group that own the facility, to try to help them get this building in a much-better condition where we don't have to worry about such a catastrophic event," said Mitchell.  Henderson said the Canadian Potato Museum, which is a non-profit organization, is willing to help pay for construction but cannot afford to pay for the repairs alone.
Posted by Carter W. Jeffery at 10:43 AM No comments:

The following appeared on the Guardian Newspaper's website today... 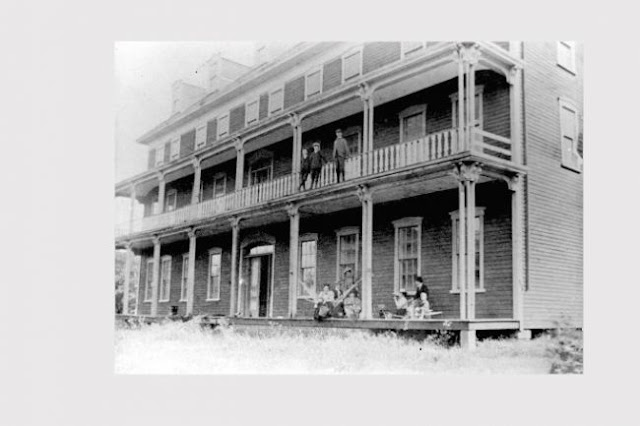 © Public Archives and Records Office
The lavish Island Park Hotel on Holman Island opened on June 12 ,1873, closed October 1878 with a reputation for hoards of mosquitos, burned down December 1904.
Nature Conservancy of Canada continuing
Campaign to buy 90-acre island in Bedeque Bay
Holman’s Island, site of the first hotel resort on P.E.I., is on its way to being protected for future generations.
The Nature Conservancy of Canada (NCC) is starting a campaign to raise money to buy the 90-acre island, which sits about one and half kilometres off Summerside’s port in Bedeque Bay.
The island has a colourful history as one of Canada’s first major resort. It has changed hands several times over the years but has been owned by the Clark family for the last 60.
MORE: On lavish Island Park Hotel
In a statement, Rodney Clark and Sue (Clark) Kelly, said they felt it was time to let go of the island and selling to the NCC allowed them to do that while ensuring the land’s protection.
The total conservation project, which includes administrative expenses, the purchase price and various other costs, comes in at about $530,000.
MORE: On helping Nature Conservancy campaign
Most of that money is already in the bag, but the NCC still has to raise about $130,000, which it is hoping to do through local private donations. The deal is expected to be finalized by the end of September.
Julie Vasseur, a co-ordinator with the NCC, said her organization is interested in Holman’s Island for a number of reasons, but the foremost would be its ecological importance to the area as a multi-species bird nesting area and as a remnant of the area’s old Acadian forests.
“We’re pretty excited about it honestly, because it’s got such a fascinating history from a cultural perspective and because of its ecological importance,” she said.
Island Park Hotel
The lavish Island Park Hotel built on the island by James L. Holman was a destination for wealthy United Empire Loyalists.  Opened on June 12 ,1873, it had upward of 100 rooms, a barbershop, bowling alley, banquet halls, bars and immaculately maintained trails and grounds. A ferry, called The Frank, took people over from Summerside. It also had mosquitoes and lots of them. Most of the articles written about the resort during its years of operation mention hordes of bloodthirsty mosquitoes descending on the guests from the salt marshes on the island. This didn’t stop Holman from trying to make a go of the business. He next tried appealing to the upper echelons of Island society as well. Trains would run up from Charlottetown and for $2.25 customers got their train ticket, diner and entertainment. Diners, according to a bill of fare from July, 1874, included: mock turtle or oyster soup, boiled salmon or fried trout, beef, lamb, chicken and caper sauce. There was also cold dishes, like ham, tongue and corned beef, and various kinds of pastries like floating island and lemon and custard pies. Despite Holman’s efforts, the business was a failure. Not enough guests came. In October of 1878 the hotel closed and Holman died six days later. The property burned down in early December of 1904.
Posted by Carter W. Jeffery at 9:21 PM No comments:

I found the following clipping on Norma Deagle-MacPhee's Facebook Page... 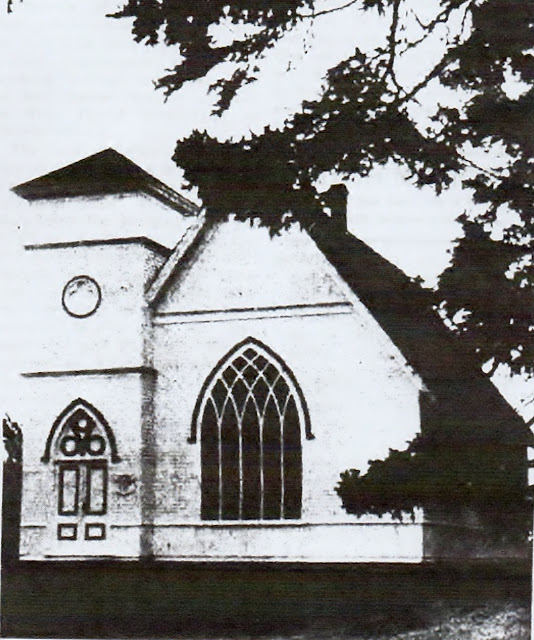 PIONEER SERVICE RECALLS LONG HISTORY OF CHURCH
TIGNISH- A centennial anniversary service honouring the early pioneers of Protestant church history in this part of the province, will be held at Tignish United Church, Sunday, July 26, 1964 at 2:30pm.
Worship will be conducted by the minister Rev. David S.H. MacDonald, who will also deliver the sermon, Special music will be sung by the Wilmot Church Quartette of Fredericton, N.B.  Henry Clark of Alberton will be guest organist.
Protestant church history in Tignish dates back 104 years.  The first church building was located one mile south west of where the present church stands.
Rev. Robert Dyer, the first Anglican clergyman to be settled in west Prince says in his journal that at Little Tignish a church was
built by the Episcopalians, Baptists, Presbyterians and Methodists and that he himself had the pleasure of opening the new church.  The year would be either 1860 or 1861.
WEST CAPE CIRCUIT
Rev. Allan Fraser, minister of Alberton Presbyterian Church from 1855-1870 had under his care an area extending from Tignish to West Cape and in the years of Tignish congregation were Alexander Stewart, Thomas Haywood, Mrs. Josiah Hamill, Thomas Barbour, Mr. and Mrs. James Haywood, Daniel Miller, Alexander MacLeod and Carlyle Bell.
BUILT IN 1893
Erection of the present edifice was completed in 1893 and on July 2 of that year was dedicated.  Communion at the afternoon service was conducted by Rev. James Murray assisted by Rev. David Sutherland of Charlottetown.
The land on which the new church was built was a gift of Mrs. Benjamin Haywood (nee Elizabeth Rodd)  So far as can be learned the building was erected by J.M. Clark and Co. of Summerside.  One of the carpenters in its employ at the time was Hensley Stavert who later became a Presbyterian minister. Bricks used for the foundation and flue were manufactured by Francis O. Hughes who operated a kiln just outside the village.
Ministers who served the congregation in Tignish were Rev. George Fisher 1884-1889; Rev. James Murray 1891-1895; Rev. A.D. MacDonald 1894-1903; Rev. W.A. MacKay 1905-1908; Rev. J.H. MacNattie 1909-1913; Rev. Emmanuel Lockhart 1914-1920; Rev. T.L. Williams 1921-1923.
SINCE CHURCH UNION
At the time of church union in 1925, a rearrangement of congregational boundaries resulted in Tignish becoming a part of Alberton Pastoral Charge.  It’s ministers since then have been Rev. J.R. Miller 1926; Rev. A.S. Weir 1926-1934; Rev. George Ross 1934-1936; Rev. M.K. Charman 1936-1941; Rev. G.N. Somers 1941-1943; Rev. Murdock Fraser 1943-1948; Rev. P.A. Fitzpatrick 1948-1951; Rev. A.R. Wallis 1951-1954; Rev. Murray Gardiner 1954-1956; Rev. J.M. Sproule 1957-1958.
The charge was without a minister for eighteen months and during this period it was served by Elmer MacLean a laymen who is now studying for the ministry.
Rev. J.A. MacIntosh was minister in 1960-1961.  The present minister Rev. David S.H. MacDonald was inducted as minister in July 1962.
About 18 years ago the exterior of the church was repaired and painted.  In 1959 the interior of the church was completely redecorated.
In preparation for pioneer Sunday the interior of the church and grounds around the church have received a major clean-up.  Within the past few years a number of gifts in honor of loved ones departed have been presented and dedicated.
Tignish Protestant Church began as a community church with its people of several denominational traditions working together to foster and promote the Christian spirit.  After a century of service it is apparently still a community church proud of honour and pay respect to the early Pioneers who kept faith.

http://www.islandlives.ca/fedora/repository/ilives%3A225734/PDF/ilives%3A225734/Full%20Text.pdf
Methodists, Bible Christians And Presbyterians In Prince Edward Island:  Campbellton-Miminegash. 1984.  Warren W. Goss. Williams & Crue. Page 53.
"TIGNISH — To the people of Tignish, Church Union was nothing new. The first church in their community was built in 1861 by Episcopalians, Baptists, Presbyterians and Methodists. Use of this little church was discontinued in 1893 when a new one was built by the Presbyterians. This church also became a community one. In 1973, the building was turned over to the village of Tignish to be converted into a museum."
_________________________________
The church that preceded the above church was built just outside Tignish on the Christopher Road on the south side of Little Tignish River.  Rev. R.W. Dyer officially opened the church in January 1860 as noted in his journal excerpt below.  He called it "Omnibus Church".  I've never been able to find references to this church name - it might have been called something else.

"January 29, 1860... After the Morning Service, I took some refreshment and started off to Tignish to hold Service in the new church.  I was not a little gratified to have the pleasure of opening this new building, especially as it has been built by all denominations, namely, Episcopalians, Presbyterians, Wesleyans, Baptists.  Service commenced at with singing, and then commenced our beautiful Service, and a sermon, Exoduc 20, and the 24th verse, which I had partly prepared for the purpose.  After the Service we sang the evening hymn and closed the service of the day which was, I believe, enjoyed by the whole congregation.  This is the first time since I came to this that I have had a church in which to conduct services or to preach.  it seemed a comfort and a great pleasure.  if there should have been one soul born again at the service, it was but the place of the (re)birth of one sinner, besides a pleasure, what a mercy.  "Laus Deo."  After the service I went to see Mrs. Platts..."
Below:  Photo of the former Omnibus Church site, the church is long gone - only a few stones remain in the cemetery - it's all grown up around it. 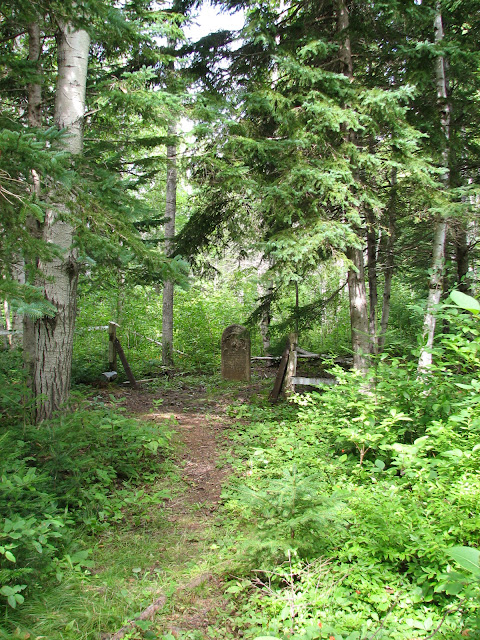 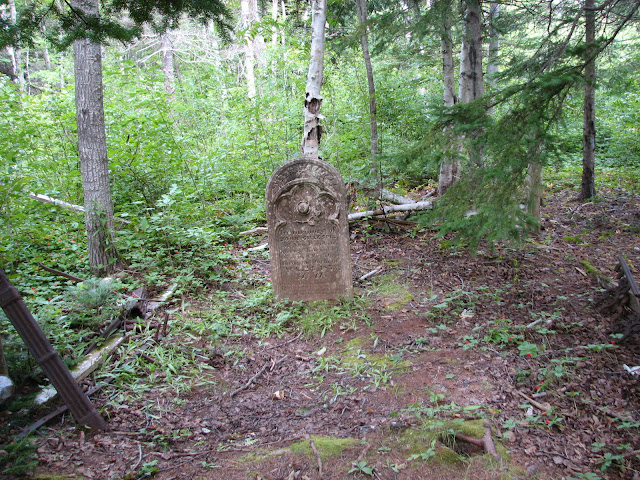 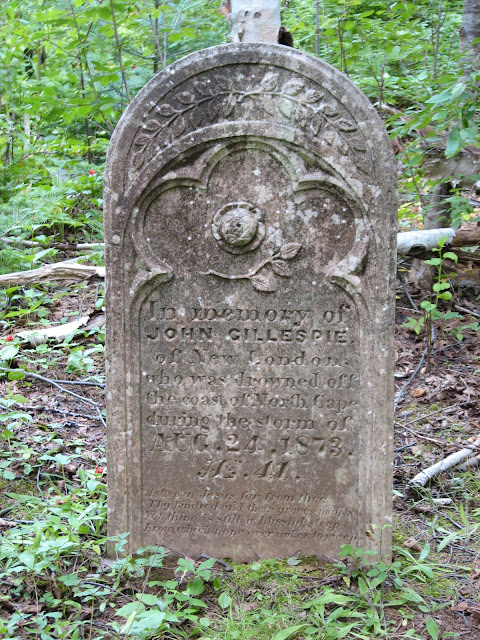 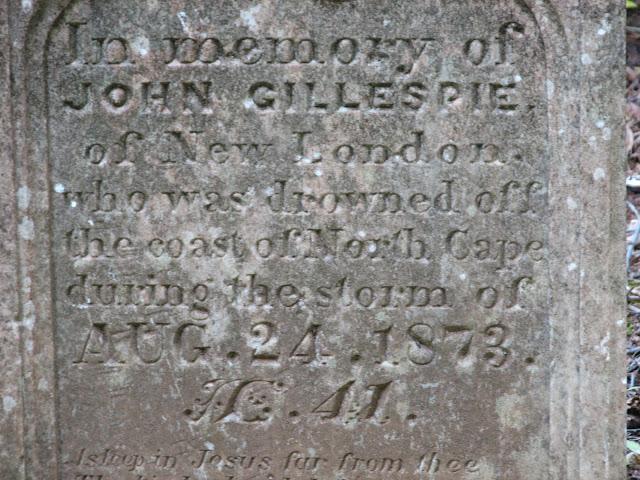