Digging up the Past - Stanhope Dig 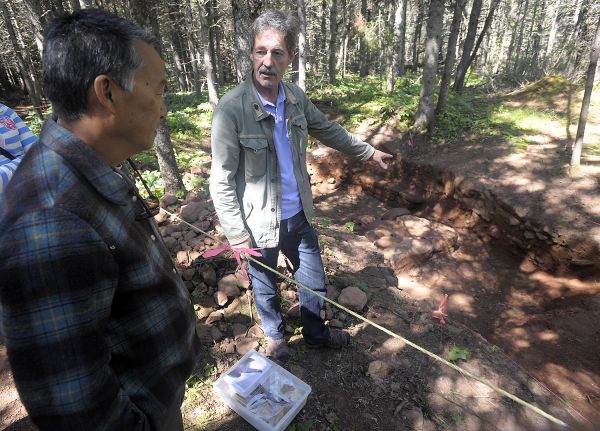 Parks Canada senior archaeologist Charles Burke chats with Keen Huie, a California resident who lives on PEI for part of the year, at an excavation site of PEI's first Scottish settlement, located on the National Park's Farmland Trail.  The dig is behind Burke, while a number of artifacts discovered over the past five years are between the two.

=========================================
Published on August 15, 2013
Mitch MacDonald
The Guardian
STANHOPE - Bear tankards, a thimble, and an entire plate are some of the more than 200-year-old items that have been uncovered at an archaeological dig here.
Parks Canada's efforts to dig up the past at the Farmlands Trail in the National Park this week is winding down.
Today is the final day for this year.
The excavation began in 2008 and was designed to give the public an opportunity to participate in discovering the first Scottish house settlement in PEI.
"That's the working theory we've been going with ever since," said senior archaeologist Charles Burke.
He said all pieces found in the past five years date back to the period between 1770 to 1810.
"The artifacts all confirm that date."
While thousands of pieces have been dug up during the past several years, Burke said much of this year's work relates to a final assessment of the site.
That includes recording geospatial date, database updating, final photography and onsite plans and maps.
Burke, who has been at the site all week, has also been discussing the dig with visitors on the trail.
On Thursday, he saw more than 20 individuals on a guided walk pepper him with questions about the dig.
Janette Gallant, public outreach education officer for Parks Canada on PEI, said the group is happy to have Burke working on the site.
She said bringing the guided tour to the site falls in line with Parks Canada's mandate of protecting and presenting the country's natural and cultural heritage.
"We try to bring people along to understand what kind of work is being done so we can understand the heritage values of the area," she said.
Gallant said Thursday's group was a mix of individuals interested in archeology, people who wanted to for a walk on the trails, history buffs and descendants of those who had lived in the area.
A public presentation themed "Archaeological Investigation in Stanhope" also took place earlier this week.
Artifacts found during the past half-decade weer shown to both those int he walking tour and at the presentation.
one of the more interesting discoveries was a thimble, which Burke said is a rare find.  He said that's because most archeologists' find more items that belonged to men rather than women.
Another interest discovery was an entire plate, which Burke described as "remarkable."
Full pieces like the plate are often found in old latrines, he said.
"Because people would loose things in latrines and don't go back for them," said Burke. cracking up the guided tour.
However, it appears the plate was likely just forgotten in the basement of a home.
"It's rare that you find a whole thing and when you do it's almost always a case of it was lost it just fell out of people's existence," said Burke "how it got there we don't know but somebody left the plate in the basement of this house.
More information on the dig can be found by calling 902-672-6350.
Posted by Carter W. Jeffery at 8:31 PM