After I left Cape Tryon Lighthouse, I went further east up the coast to the mouth of New London Bay and photographed the New London Lighthouse - it's tricky to determine how to get closer to the Lighthouse, so from a distance and with my zoom, I took these photos. 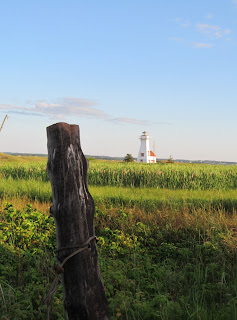 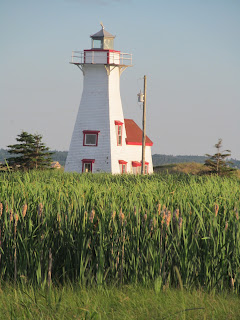 This lighthouse had the first female lighthouse keeper on the Island and in Canada - Maisie Adams (1911-2000) her story can be found at  http://www.museevirtuel-virtualmuseum.ca/sgc-cms/expositions-exhibitions/phares-lighthouses/English/Stories/maisie1.html
…When Claude Adams took over as keeper on December 1, 1940, he was already ailing, and his wife Maisie assumed most of the duties of lightkeeper.
It must have been a daunting task for the 29-year-old old woman – looking after two small children, a sick husband, a lighthouse and a range light.  Robert and Gertrude were born before the couple moved to the lighthouse…Maisie’s husband Claude died of cancer on January 23 , 1943.
After Claude's death several men from the area went to the office of the Department of Transport and recommended that Maisie be hired as official lightkeeper.  She had no other means of support and had been doing the work all along, so she was certainly capable.  She kept the lighthouse for a total of 14-years, from 1943 to 1957.

You can also hear Maisie tell stories at the following Island Voices website as collected by historian Dutch Thompson - http://www.islandvoices.ca/interviews/detailview/ivoices:ivoices20100622acass002 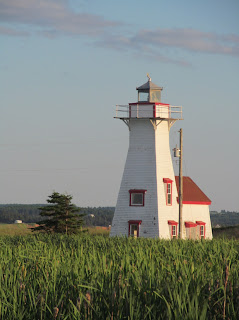 The following history of the New London Lighthouse comes from Navigational Aids: Fisheries and Oceans (CCG) Prince Edward Island -
This Lighthouse was established in 1879.   It is located on the beach, Northeast side of the harbour entrance with a latitude N. 46 30 46 and a longitude W. 63 29 09.5.  It is a square skeleton tower.  It has a lantern mounted on a pole with the shed at base.
James A. Pidgeon was lighthouse keeper of the New London lights in 1918.  Hugh John MacRae was the next lightkeeper.  He started on October 16, 1931 then he went on military leave October 31, 1940.  he was temporarily replaced by his brother, Charles Earl MacRae.  Charles was temporary keeper from November 1 to November 30, 1940.  Claude died on January 23, 1943 and his wife, Maisie Adams, from French River, took temporary charge of the lights (which lasted till 1957).  Then W. Roland Paynter was hired as temporary keeper on May 1, 1957.  Then his services were no longer required as the light became electrified.
In 1912, repairs were made to the oil house and in 1913, the chimney was rebuilt.
In 1916, repairs were done at the lightstation and repairs were completed to the lights in 1918.
In 1922, the tower and the deck were rectified and in 1932, the lights were adjusted.
In 1933, the shingles were nailed to the tower and the dwelling.
In 1935, an entrance porch was added to the lighthouse dwelling.
In 1942, a new gallery was built and in 1943, the old gallery which had been stored in the shed was torn down.
In 1944, general repairs were to be made on the lighthouse.  The lighthouse was to be raised at least 12' from its present position and a new concrete foundation placed under the sills.  A new store shed was also built.
Repairs which consisted of re-shingling roof of the kitchen portion and repairs to deck of the gallery around the lantern room were completed in 1948.
In 1953, damage was done to the light caused by the storm and repairs had to be done.
The last alterations were made in 1987.

On my way from the lighthouse to the little village of French River, I photographed the following old buildings. 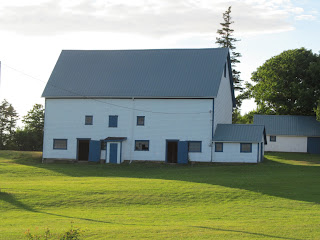 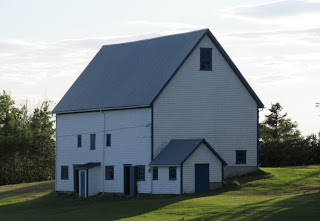 Below: The Lamont Homestead.  From here you can golf at French River Golf Course and the check-in to visit "Anne's House of Dreams". 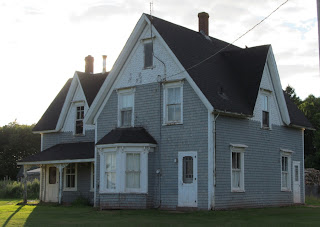 Below: "Anne's House of Dreams". 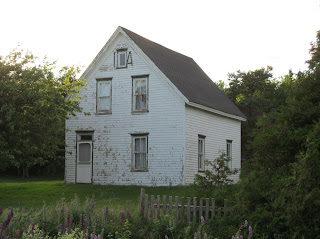 Below: a typical Island-ell farmstead. 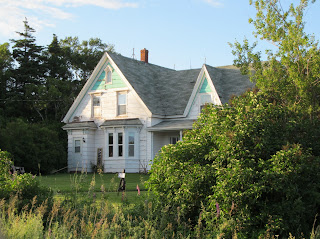 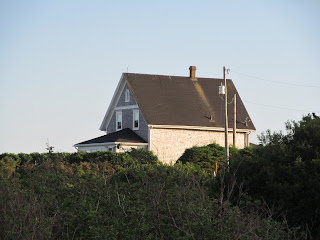