The English Cottage below was home to the Jeffery family between 1756-1809 - located in the small village of Brook, Isle of Wight, England.  Stephen Jeffery purchased interest in this cottage and passed it onto his son James.  In 1809 James (and his four children) sold their interest in the cottage in preparation for emigration to Prince Edward Island.
The house is very small, two rooms on the main floor and two on the second with the hall and stairs in the middle - it has only four windows (on the front) and a front door.  Today the house is used a self-catering cottage.   I visited here in 1987 and again in 2005. 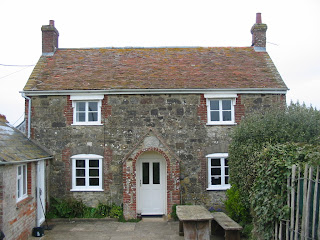 I have a bible that belonged to my great-great-great-great-great-grandfather Stephen Jeffery, it was printed in Oxford in 1752, four years before Stephen moved in to this cottage.  In the Bible he recorded the dates and times of the children's births, along with family marriages and deaths.  He left the Bible to his son James, then James' left it to his son Stephen who wrote in the Bible, "I came to this Country, Left England Augt 14, 1810 - Landed Novr 5, 1810 in Charlotte Town"  Stephen left the bible to his nephew and Godson Stephen E. Jeffery where it remained with him in a truck on the family homestead in Alma, the home in which I was raised.  My parents gave the Bible to me in the early 1980's.
We have confidently traced the Jeffery family back to 1638 with the birth of Richard Jeffery on the Isle of Wight - the Jeffery name appears in the Islands public records as early as 1327. 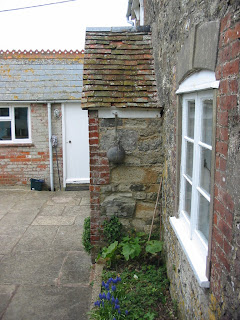 Above:  looking at the side of the front entry to the Jeffery Cottage, note the slate roof - also note the garden shed at the left corner of the Cottage.  Below is a close look at the front right corner. 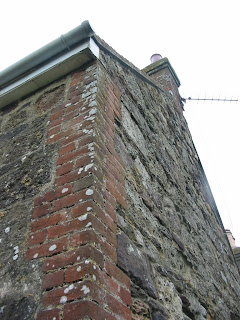 Below: to the left is the rear of the Jeffery Cottage, to the right is Chine Cottage - no windows or openings in the walls. 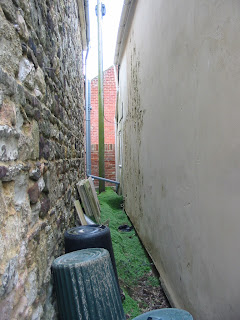 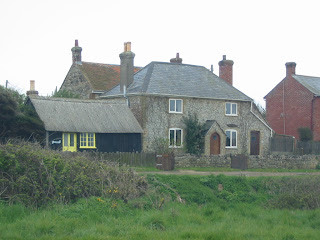 Below: Brook, Isle of Wight - the Jeffery Cottage is in the middle with the red roof, behind Chine Cottage.  The house to the far right was featured in the book, Family Houses by the Sea.   The beach is to the right. 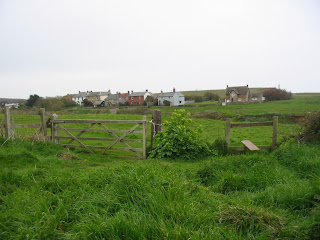 Below:  the beach at Brook, Isle of Wight.  The white cliffs in the far distance is Tennyson Downs, home of Alfred Lord Tennyson - see below. 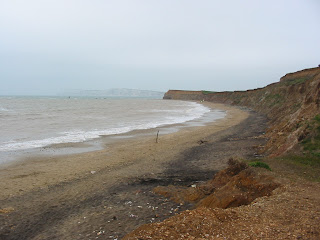 Below: Tennyson Downs - the home and property of Alfred Lord Tennyson, Poet Laureate of England. The house, called Farringford, is down the hill behind the trees and today a hotel.  The Tennyson's purchased the property in 1853 and made it their home for the next 40 years.  At the highest point of the cliff is a Celtic cross in memorial to Tennyson.  Brook and Tennyson Downs are located on the southwest side of the Isle of Wight.  This small Island measures 155 square miles in area.  The Island is much like Prince Edward Island in that it's the summer playground and sunshine capital of the British Isles.

Below:  On the north side of the Isle of Wight is Osborne House- the summer home of Queen Victoria and her family.  The house was designed﻿ by her husband Prince Albert and built in the 1840's - the house is in the Italianate style.  Queen Victoria died here in 1901, shortly afterwards her son King Edward VII donated the property to the people of Great Britain - today it's a museum. 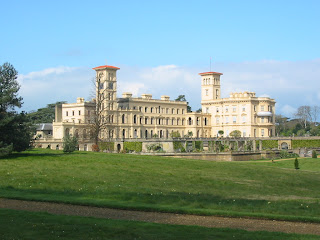