This 2-storey house with hip roof is located on the north side of the O'Leary Road in Knutsford - across the road from my grandparents Roy and Empress McDowell (who moved away in 1983).  The house was expanded by Wm. P. Meggison in 1924-25.  The photos were given to me by William's grandson Bill. 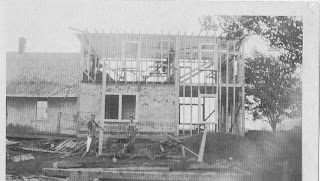 Note on Back:
Remodeling Meggison Home, Knutsford, PEI.  Wm. P. Meggison & Son.
It appears the old small house was to the left. 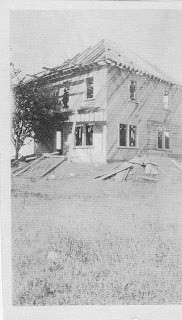 As a child my mother recalls going to this house to visit Mrs. Meggison and was uncomfortable to see a casket in the sunroom - it was for Mr. Meggison.  He was a carpenter and had made it for himself - it was stored there ready to go when the time came. 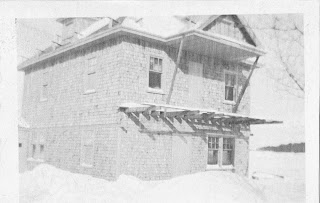 The Meggison House.  The floor plan was described to me as follows: the sunroom was across the south front from side-to-side; the parlour was in the front of the main house from side-to-side, taking up half of the new main floor plan; on the back right corner was a large hall with the stairs in the northeast corner; on the back left corner was the dining room (later the "inner kitchen"); to the rear in the old section was the "back kitchen".  The second floor had four bedrooms, one in each corner.  The bedroom in the back right was smaller with the stairs coming up against the back north wall; there was a central hall with stairs to the attic. 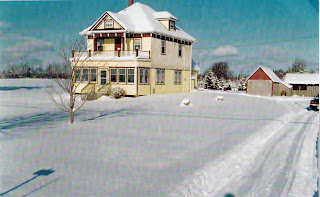