History of the Brae

I was going through some of my Prince Edward Island local history books and started to read through "Past and Present: A history of Brae".  Alot of the history of my grandmother's family, the MacNevin's, can be found in this book.  Below are some interesting excerpts about the early settlement of the community. 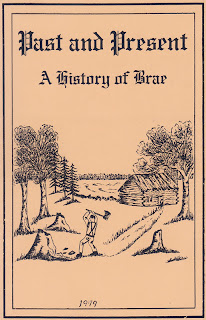 Page 6-7
Early in the 1880s, an Indian family lived both summer and winter in (Red) Neil MacNevin's woods.  At first the family included Joe, his son Peter and Peter's wife.  Joe, a frequent visitor at several homes, accepted potatoe, vegetables, occasionally milk or eggs from the people he visited.  However, Joe was not a beggar.  His white friends would receive from him a brant, a partridge, some eels, berries, or even an axe-handle once in awhile.  After the camp was destroyed by fire, the Indian family moved to another location near Lockhart's book in Coleman.  A baby daughter, born to Peter and his wife while they lived in Brae, was named Grace in honour of Mrs. Angus MacEachern Sr. (Grace) who went to the camp to give assistance at the baby's birth.
Descendants of early (Acadian) settlers in The Brae claime that relics of what may have been an earlier settlement along Brae River were found by the Scottish pioneers and by other settlers who came to Lot 9 a short time later.  Their story is as follows:
Traces of small dyked areas along the river marsh lands were seen by the early settlers.  Several old log cabins with trees growing out through their roofs squatted in ruins near springs in the woods.  A musket, a bayonet, and a helmet of the type used at one time by French soldiers were discovered by Captain McAllar (one of the early Scottish settlers) in the remains of an old log cabin on his place of settlement.  Three old French coins were picked up by John MacLean Jr. while he was planting potatoes around a stump in his father's new land.  (This young settler had dreams of becoming a millionaire as he dug for days searching for other coins but he saw no more).  About 1830, an old medal on which was engraved the fleur-de-lis, the emblem of France, was found by Mrs. John McDonald Sr. among pebbles gather near the river bank.  The china head of a doll was dug from the ground by another settler who was clearing out what appeared to be virgin forest.  Anthony Downing (Antoine Downee), who was digging a small grave in which to bury his dog, lifted up with his spade the rusted remains of an iron pot, a gold bracelet, and a rosary.  On the bracelet, the word Marie was engraved.  The nature of these items discovered by the early settlers seems to indicate that people of French origin may have lived near Brae River at some earlier time.  Anthony Downing claimed (According to his grandson, James Delaney) that in a year between 1750 and 1760 his grandfather Downee and family fled to Gaspe from the area now called Brae in order to escape deportation to France.  Anthony also claimed that several times in his early youth he (Anthony) had accompanied his father and brothers on trips from New Brunswick across the strait to Prince Edward Island.  The purpose of these visits was to dig for coins and additional treasures buried by the grandfather Downeee and his fellow Acadians before they fled from their homes near the stream that is known to-day as Brae River.
Page 17-18

The Acadians who faced the struggle for existence in an unbroken wilderness along Brae River were well adapted for pioneer settlement in the forest.  Their habits were frugal and they could turn their hand to anything.  They cleared the land, built log cabins, grew oats, barley, corn, potatoes and beans, built their own furniture, chimneys and work tools.  They operated pit saws and exchanged lumber, which was taken away in a schooner by Anthony Downing, for some supplies.  They made all the clothes they wore and ate fish from the river, shell fish from the shore, and other wild animals and birds.
The story of these industrious settlers sounds like a happy one.  However, all was not well here in the 1840s and before 1850s, almost all the Acadians of Upper Brae had moved elsewhere.  No record stating the reasons for their departure has been found but stories passed down through the years may throw some light on the subject.  Traditions says that Acadian pioneers, who had been living as squatters, refused to lease their small farms and were forced by the rent collector to go to New Brunswick.  Others, who had leased property, left Brae when the approach of the agent who came to collect their rent was more militant than diplomatic.
Also, continues the tradition, the forces of nature seemed to combine against the Acadians.  Bears destroyed all but four sheep in Upper Brae during a spring that followed three successive years of crop failure in Lot 9.  This loss was a great blow to the settlers who depended on their sheep to supply wool, and raw material from which they manufactured cloth and yarn to be made into clothing and blankets.  Early in the autumn of the same year, it is said that a wild cat attacked two little Robichaud girls who were playing in the woods behind their home.  Before the animal was destroyed, one child lost an eye and the faces and arms of both children were badly torn...
Page 24-25
After the first crop was planted around the stumps, the farmer replaced his temporary shelter with a log house and erected a crude pole barn to shelter his livestock in winter.  Logs for the house were cut to lengths, squared to size, and notched at the corners in such a way that while the logs lay flat against each other, they were interlocked at the corners to keep them in place (called Dovetail corners).  The chinks between the logs were filled with moss and sods to keep out the draft.  The first door hinges were strips of home-tanned leather.
The primitive homes of these first Scottish settlers (1826-27) were built with log ends protruding eight to ten inches at the corners, just as they were cut with the axe.  Acadian homes, built in the 1830s and 1840s, had the log ends sawn off in line with the walls and presented a neater appearance.  The earliest houses were built without cellars, foundations, or floors.  As soon as the farmer had opportunity to saw plank or boards he dug a pit inside his house and place a floor over the excavation.  Entrance to this cellar was through a hatchway in the floor.
One pioneer farmer, John MacDonald Sr., brought with him some furniture and an iron stove.  It was necessary, however, for most of the earliest settlers to make their tables, benches, bed-frames, and cradles on the spot and to build stone fire places and chimneys.  An ingenious Acadian settler, Fabian Robichaud, built his chimney of straw, sticks and mud.  Windows of the first log houses were covered with animal skins scraped thin enough to admit light.  In time, each Scottish settled had glass placed in a window of the main room of his log dwelling, but he Acadian homes continued to be without glass for some years.
Page 28

As the size of the farms continued to grow, frame barns were built to shelter an increasing number of livestock and to provide storage for grain and hay.  Much labor was involved in erecting a frame building, even a small-sized one.  Sills, studs, and rafters must be hewn by hand with an adze and the frame mortised and pinned with hand made wooden pegs.  Boards were sawn from logs placed over a saw pit; shingles were split from cedar or pine blocks with cutting instrument call a frow; square headed nails were forged by hand.
Older residents of the district claim the first barn in Lot 9 was built by John McDonald St. in Lower Brae, about 1835....The saw pit over which the McDonald's sawed their lumber was described as an excavation approximately ten feet long, seven feet wide, and eight feet deep.  The log to be sawed was held in a horizontal position across a log framework with iron catch dogs.  The six-foot steel whip-saw, brought by Mr. McDonald from the Old Country, was held in a vertical position and operated manually.  A man standing on the framework guided the saw through the log in an upward direction while another man in the pit pulled it downward.  It was slow, hard work, but when logs were large, not many boards were needed to cover a fairly large area. 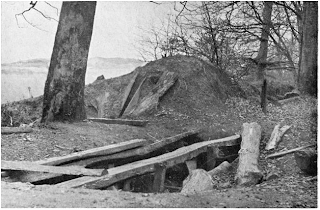 Image Above:  The Old Country Saw-pit. Photograph by Gertrude Jekyll. Old West Surrey (1904). Scanned image and text by George P. Landow. [You may use this image without prior permission for any scholarly or educational purpose as long as you (1) credit the photograher and (2) link your document to this URL.]   http://www.victorianweb.org/history/work/10.html
Posted by Carter W. Jeffery at 8:13 PM