There was a great fire last evening in Sackville, New Brunswick at the Enterprise Fawcett Foundary - they produced cast iron cookstoves and furnaces.  These stoves were found in many, many homes of the Maritimes - a 160 year old legacy. 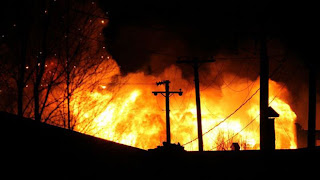 Flames could be seen shooting 10 metres out of the Enterprise Foundry in Sackville, N.B.
(Submitted by Heather Reid)
A historic foundry in Sackville, N.B., burst into flames following two apparent explosions on Wednesday evening.
Police said they were unsure if anyone was inside the Enterprise Fawcett, which employs around 60 people, although they said it's unlikely given that the fire started in the evening.
Fire Chief Craig Bowser said the department was called around 6:30 p.m. after the two explosions were heard. He said he immediately called in help.
Firefighters from several nearby regions converged to fight the flames, which could be seen shooting 10 metres out of the top of the building, and police have cordoned off the area.
Police say they do not know what caused the explosion.
There is not much left to the historic building, which is owned by Enterprise Fawcett.
The Office of the Fire Marshal will be at the fire scene on Thursday trying to discover what caused the fire at the historic site.
The Enterprise Foundry dates back to 1852. It was rebuilt in 1908 after a devastating blaze.
Mathew Johnston said he considers the building as part of the town’s history.
“My grandfather, he worked here when he was my age. So it's a pretty big place for this town,” he said.
The loss was being felt immediately in the community.
Greg Hicks ran a small engine repair shop in the building and he said he lost everything in the fire.
“It's not very good, doesn't feel very good but there's nothing I can do about it,” he said.
“I can't change it so ... [it’s a] shame and I don't have insurance either.”
Hicks said his son, Jordan, said when they arrived to the fire, the flames were towering over the building.
“They were shooting right out of the building probably some of them 50 feet,” he said.
The Enterprise Fawcett fire is the latest in a series of recent fires that have destroyed important local buildings in New Brunswick.
A one-storey building containing the municipal hall, fire station and RCMP offices in Rogersville were destroyed in a fire on Jan. 9.
Another fire destroyed the historic Inn on the Cove and Spa in Saint John.
As well, the Waterside Baptist Church, which is near Riverside-Albert, was destroyed by a fire after being hit by lightning on Jan. 13.

Here's the Enterprise Fawcett website:  http://www.enterprise-fawcett.com/
' Cast Iron Quality Since 1852 '
Located in Sackville, New Brunswick, Canada, the present day Enterprise Fawcett is the product of a small beginning that started back in 1852 by Mr. R.M. Dixon and a number of leading farmers under the name Dominion Foundry Company. It is believed thats some of the early work produced by the foundry was made to supply the sailing ships of the era. However, the main products have always been cast iron cookstoves and furnaces.
The foundry was built near the Sackville wharves as the heavy, brittle castings required special consideration for transporting. Later, the railroad established a station nearby which enabled the plant to continue to transport its products.Over the years the foundry prospered and employed more than 400 workers.
At one time Enterprise was the only company in the world manufacturing a complete line of cooking products using wood, coal, oil, gas, electricity and microwave energy all in one factory.
Enterprise assets were sold in the early 1980s to Enheat Inc., also of Sackville. It then amalgamated its Fawcett Division with Enterprise to form Enterprise Fawcett Limited.
Enterprise Fawcett has been passed down from Grandfather to Grandson to Brother and is now owned by Darren Wheaton, a long time veteran of the company.
Here the skills of generations of craftsmen came together in the production of the world's finest cookstoves. The original molds, made from wooden patterns carved by hand, inspired the Legacy Series. The Monarch, King, Savoy Oil and Savoy Wood cookstoves combine authentic styling with today's standards. Our craftsmen still manufacture the cookstoves the way they did more than a century ago, however today these cookstoves are either CSA or ULC listed, with the exception of the Queen, Woodsman and Little Cod. We also manufacture furnaces and heaters on site.
Enterprise Fawcett is one of the few remaining foundries in the world.

Here are some of the products they still have for sale today:

I'll have to go out to the barn tomorrow and see if it's an Enterprise Fawcett. 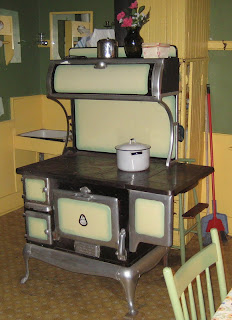