I was hoping to capture a last photo today of the long since abandoned home of Herbert and Florence Leavitt of Alberton, however, it was demolished on Friday, May 4th.  The house was located on the northeast corner of Church and Prince William Streets.  The day before demolition my brother salvaged 16 doors from the house.
The home and former site of Leavitt's Maple Tree Crafts was abandoned by the family about a decade ago - the site grew up in trees and nearly disappeared in the summer foliage.
Below is an image from Google Streetscapes - it's the only image I could find of the old house. 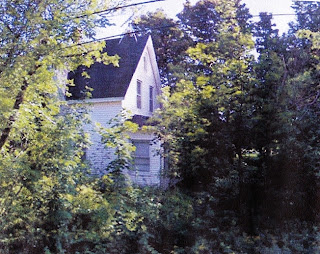 The following information comes from:
http://www.islandregister.com/burials/ip1.html
Leavitt, Herb 1920-1997 , R.C.A.F./Woodworker/Businessman; President of the P.E.I. Mutual Fire Insurance Company; Director of the Island Telephone Co. Ltd.; Chairman of the Holland College Board of Governors; Fire Chief for the Town of Alberton; Awarded the Distinguished Flying Medal; the Aircrew Europe Star, the Defence of Great Britain Medal and Canadian Silver Jubilee Medal.
Below is information about Leavitt's Maple Tree Crafts...
Footprints in the Sand of Time: A History of Alberton
by Alice Green, 1980, Page 193-194.
Leavitt’s Maple Tree Craft, began as a hobby and continued as a family enterprise, has developed into an industry that is well-known across Prince Edward Island and far beyond.
It began when Herbert Leavitt, a Royal Canadian Air Force veteran of World War II, built a lathe and began to do some wood-turning just for his own pleasure.  He derived so much satisfaction from this hobby that eventually he decided to make it a means of livelihood.
Mr. Leavitt’s operation began in a small workshop behind his home and in the beginning he was assisted by his wife Florence and his father, William C. Leavitt.  In 1958 Kenneth Quigley began to work with the Leavitts and six years later Allan Pridham joined the staff.  A more commodious home for Maple Tree Craft was built on Prince William Street in 1967.
Herbert Leavitt is endowed with creativity and skill, an artist in woodcraft.  He and his craftsmen find pleasure and a sense of accomplishment as they use their ability to produce plates and trays, lazy susans, bookends, candle holders, trophies for various events and gifts for special occasions.
Only choice Canadian woods are used in Maple Tree Craft, chiefly bird’s eye maple, sugar maple and curly birch.
In addition to his crafted articles, Mr. Leavitt has on display in his showroom a sizeable collection of woods from all parts of the world which he has assembled over the years.
Maple Tree Crafts was a forerunner in the revival of crafts and small industries on Prince Edward Island.
The following is a piece of Leavitt's woodworking for sale today at: http://www.etsy.com/listing/92217214/vintage-wood-dish-prince-edward-island 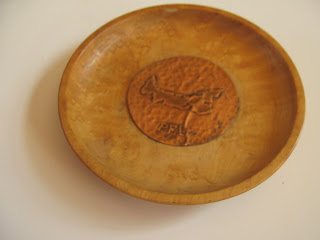 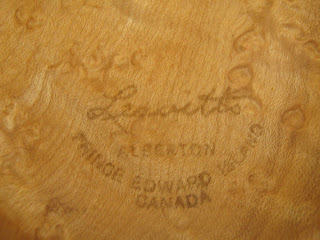