The same day I photographed the Bonshaw Baptist Church, I photographed the former Bonshaw Presbyterian / United Church.
The following information about the church comes from the book, BONSHAW: A Stroll Through the Past, by Wm M. Glen CG(C) and Elizabeth A. Glen (C) 1993.  Page 29-30.

In 1860 Reverend William Ross was ordained and inducted into a Presbyterian charge which included Bonshaw, Bannockburn, Brookfield and Dog River (Clyde River), etc.  Bonshaw was note din 1865 as part of a charge with Brookfield and West River which was served by Reverend George Sutherland, Donald McNeil, Alexander Sutherland, Alexander Munro, Charles Ross (a Student) and others.  Later the same year Bonshaw was separated from West River and united with Tryon to form the Tryon-Bonshaw Pastoral Charge of the Presbyterian Church of the Lower Province of British North America.  It was noted that Bonshaw "greatly strengthened the Tryon" charge.  Where the congregation initially met is not clear s it was on April 3rd, 1863 that the trustees of the Presbyterian church of Bonshaw purchased a piece of land for the erection of a place of worship.  The piece of land located at the west end of the Bonshaw bridge, was purchased from Alexander Robertson for the sum of five shillings.  The first evidence of the church was the event of the first communion service which was held on May 26th, 1867.  John G. Cameron was the pastor of the charge between March 14, 1867 and 1873, so was probably the preaching minister at the first communion.
The Islander (newspaper) of July 26, 1867 reports a "Public Tea at Bonshaw" which was used to raise money to liquidate the debt upon the Presbyterian Church.  The sum raised was 60 pounds and an elaborate description of the day's social events is found in the clipping below (not insert here).
on June 10, 1867 the first church session was held, moderated by Revd John Cameron.  Visiting elder Mr. Henry Hyde and Revd Alex Falconer were in attendance.  Mr. James Gordon senior of Appin Road was ordained elder of the Bonshaw congregation.
In 1886 a lecture describing P.E.I. a hundred years previously was given in Bonshaw by Judge Alley.  The audience appreciated the lecture and the proceeds were believed to have gone to pay part of the cost of the organ for the Presbyterian  Church.
In 1925 Bonshaw and Hampton voted for Church Union with Victoria, DeSable and Appin Road to become the Hampton Pastoral  Charge of the United Church of Canada. 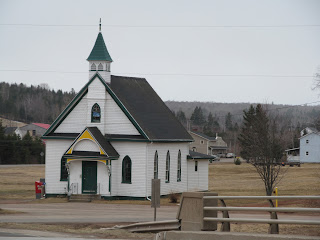 Above: the front, facing eastward.  The church is located on the northwest corner of the TransCanada Highway and Green Road, kitty corner across the highway from the Bonshaw Baptist Church. 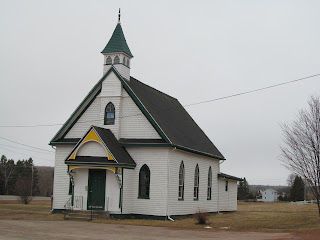 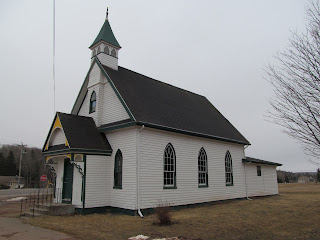 Below: The front door portico/porch roof support has been modified - originally there were two posts holding up the front of the roof - they were removed and replaced with these super large brackets - likely done when the former church was used as an antique shop following its closing. 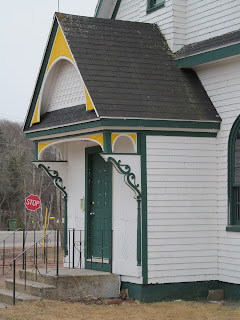 Below:  the cupola / spire-like detail was recently replaced. 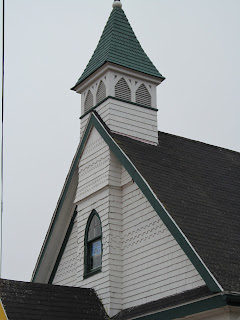 Below: today the former church is known as Bonshaw Hall where many community activities and fundraisers take place. 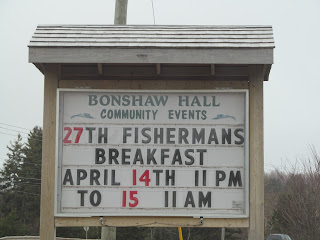