This article appeared recently on the Guardian Newspaper website.
http://www.theguardian.pe.ca/photo/Lighthouse-2138401 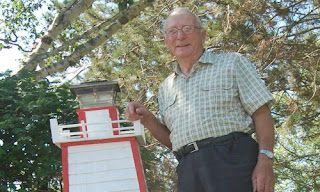 Published on August 2, 2012
Wendell Mill, 82, (of Stratford) was a young boy when he used to row over to the Fish Island lighthouse on Fish Island in Malpeque Bay to spend time with the lighthouse keeper and his family. Last winter he decided to fulfill his longstanding dream of building a small-scale model of the lighthouse, which was eventually replaced by a range light and was moved to Cabot Beach Provincial Park in 1989.
GUARDIAN PHOTO BY MARY MACKAY

Wendell Mill of Stratford is seeing the light of a small-scale lawn-mounted lighthouse that he modeled after the former Fish Island lighthouse from his childhood memories in Malpeque Bay area.

Wendell Mill has been seeing the light of the former Fish Island lighthouse in his mind’s eye for more than half his lifetime.

And now after a massive in-house building project, the 82-year-old has built a small-scale version of the same lighthouse in Malpeque Bay that he used to visit often as a young boy not far from his home in Mill’s Point.
“It looks something like it, doesn’t it?” Mill says of the stately structure he has erected on his front lawn in Stratford in the centre of a scenic spread of flowers and more.
Last winter this amateur craftsman decided to try his hand at recreating the lighthouse of his childhood using a 1913 photograph of the structure and his memories of when it was still on Fish Island, which is at the mouth of Malpeque Harbour across from Cabot Beach Provincial Park.
Built in 1876 the Fish Island lighthouse guided mariners safely into the waters of Malpeque Bay until 1961 when what is called the Malpeque Harbour Approach Range Lights took over its duties.
In 1989, locals anxious to save the historic light tower from the effects of erosion, arranged to have it airlifted by the Search and Rescue crew of Squadron 13 at the former Canadian Forces Base in Summerside to nearby Cabot Park where it overlooks the beach to this day.
It appeared in the CBC television series, Emily of New Moon, which was based upon a book written by Lucy Maud Montgomery.
Back in the early 1940s when the lighthouse was still on Fish Island, Mill’s family homestead at Mill’s Point didn’t have a view of the beckoning beacon, but he was just a dory jaunt away.
“I used to go there. They’d drop me off when they went fishing. They’d go hand-lining and call for me on the way back. I was too small. They thought I’d get seasick so I’d pick cranberries,” he remembers.
When he was a little older, about 12 or 13 years of age, he’d often visit the last lighthouse keeper, Johnny Chappell, and his family.
“That’s the living quarters. I had a good many meals there,” he says of the 1-1/2 storey dwelling that was attached to the lighthouse, which also had an affixed storage shed.
“(The lighthouse keeper) used to come up home and we’d take him to Summerside or Kensington to get groceries and he have to get there and back before dark to do the lights.
You couldn’t get there with a car or anything, you had to go by boat.”
Mill actually enjoyed the vistas from the top of the lighthouse on numerous occasions.
“The view was nice. I was there in a storm, a northeast gale; a big surf comes in there. You could hardly get in there with a boat the tide goes so strong. I was stuck there for a day or two. I guess I’d be 12 or 13,” he recalls.
Although he couldn’t see the light from his home, the booming foghorn was a familiar sound.
Mill remembers it was a welcoming sound when he and a friend rowed across the bay to the Port Hill area where they fished smelts for two seasons.
“When we were coming across we could hear that horn and I said to (my friend) I’m going to build that (lighthouse) someday,” he says.
Mill moved to Charlottetown as a young man and worked for 47 years with Canada Packers.
Then last year he decided it was high time he got around to building his model of the Fish Island lighthouse.
“Dad said he had very fond memories of this place and in the fall he said, ‘I’m going to build (a replica) of the Fish Island lighthouse. And we just thought he was joking. We had no idea he was going to do this,” says his daughter Carolyn Villard.
“So he got a picture of the Fish Island lighthouse and lo and behold he was working diligently down in the little dungeon down there (in the basement), and then one day he showed me what he was building.”
The mini-lighthouse, which stands about five feet high, was built with plywood and cedar shingles.
Mill fit his lighthouse with a solar light and painted it its original colours of white with red trim.
He placed it in the centre of a land- and sea-scape that includes a little fishing dory sailing in a sea of blue pansies, a Prince Edward Island sandstone shoreline with beach sand and starfish, and ornamental grasses like dune marram grass as a backdrop.
“I have fond memories every time I go out there,” Mill says.
“That’s why I built it.”
* * * * * * * * * * * * *
Below information cf - http://www.lighthousefriends.com/light.asp?ID=937 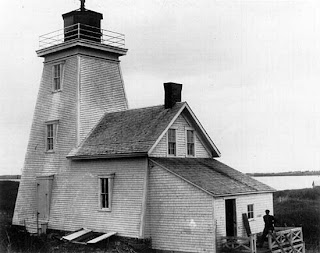 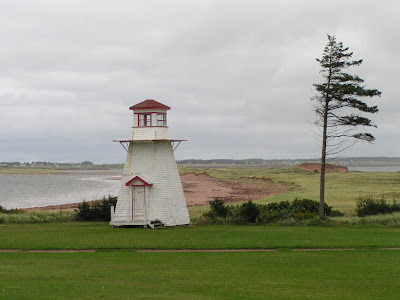 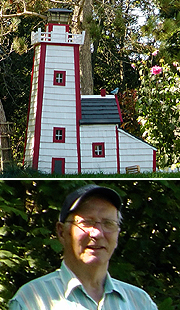 A Stratford man has plenty to be proud of after spending last winter in his basement building - a 5-foot model of a lighthouse. But it's not just any lighthouse. 82-year-old Wendell Mill has recreated the lighthouse in Malpeque Bay that he visited as a boy. It was located on a tiny island in Malpeque Harbour called Fish Island. The replica now sits amid blue flowers on Wendell's front lawn on Keppoch Road in Stratford. And that's where Island Morning's Pat Martel met Wendell Mill.
http://www.cbc.ca/islandmorning/episodes/2012/09/12/malpeque-lighthouse---wendell-mill/
Posted by Carter W. Jeffery at 5:21 PM