I was up to Cousins Shore recently and took this one photo of the former Cape Tryon Lighthouse - now used as a private summer cottage. 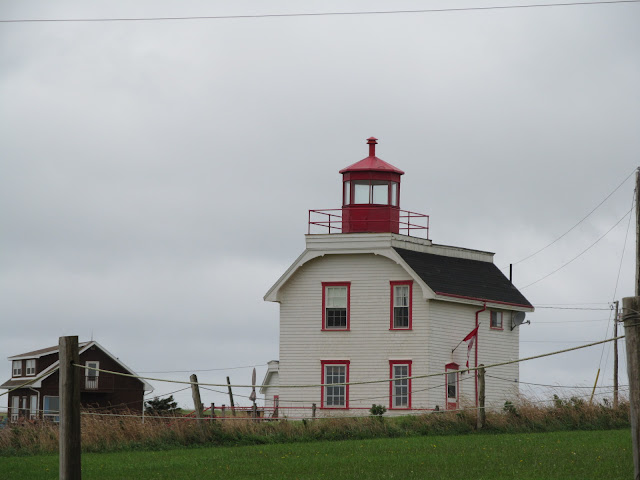 I found this www.youtube.com video and comments.


The following history of the Cape Tryon Lighthouse comes from Navigational Aids: Fisheries and Oceans (CCG) Prince Edward Island -
This Lighthouse was established in 1865.  It is located near the harbour entrance with a latitude N. 46 26 17,9 an a longitude W. 62 44 30.
Cape Tryon Lighthouse consists of a combined dwelling and light tower.  It is a thirty-five (35') foot wooden white tower.
In 1912, repairs were made to the chimney of the lighthouse.
In 1943, the old gallery was to be torn down and a new one was to be erected for the lighthouse.  In that same year, the light was maintained through winter for the R.A.F. Flying Schools.  The last alterations were made in 1976.
William Bell from French River was the first lighthouse keeper of Cape Tryon.  He operated the light in 1905 until he died in 1915.
James Adam then became temporary lightkeeper on October 15, 1915.  He resigned from his position on October 7, 1927.
On October 8, 1927 Frank Pidgeon was temporary keeper.  Then Frank became permanent keeper in 1928.  He retired on July 13, 1936.
On July 14, 1936 James Garnet Graham was hired as temporary keeper.  He retired on February 28, 1937.
When James Graham was relieved of duty, William Brander became keeper on March 1, 1937.  William Brander was then relieved of duty on November 1, 1937 and James Graham was appointed permanent lightkeeper.
In September of 1942, James went on leave of absence to join the armed forces.  So, they hired Robert Elmer Parsons to act as temporary keeper.
Arthur Lea Pidgeon was the next keeper.  He started on October 8, 1942 and discontinued his position because of his poor health on October 17, 1945.
Guy T. Arthur took over as temporary lightkeeper until Pidgeon was able to return to his duties.
In 1946, John L. Graham kept the light until 1948 when James duties as keeper.  He resigned in 1952 due to his failing health.  Guy T. Arthur was placed as temporary keeper again.
Arthur Elwood Paynter served as lightkeerp on April 1, 1953 until February 15, 1962 when the light became automated.
Cape Tryon Lighthouse is a coast light that is used by considerable traffic passing along the north side of Prince Edward Island. 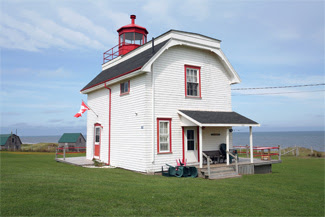 Description: Cape Tryon, located 2.4 km (1.5 miles) northwest of New London Harbour, is a remarkable red sandstone cliff with a height of 33.5 metres (110 feet). From this lofty perch, the Cape Tryon Lighthouse guides mariners along the northern coast of Prince Edward Island between Richmond Bay and New London, warning of the shallow water that extends out a considerable distance from shore.
The first Cape Tryon Lighthouse was put into operation on the opening of navigation in 1905 and stood on ground 15.2 metres (50 feet) back from the edge of the cliff. B. D. Huntley of Vernon River Bridge was awarded a $1,590 contract to construct the lighthouse, which consisted of a rectangular, wooden dwelling, painted white, with an octagonal, red iron lantern mounted on the north end of its gambrel roof. The lighthouse stood 11.3 metres (37 feet) tall from its base to the ventilator on the lantern, and its first beacon was a temporary seventh-order white light, visible for sixteen miles from all points of approach.
In 1906 the temporary lens was replaced with a fourth-order Fresnel lens manufactured in Paris, France by Barbier, Benard & Turenne. The lens had four lenticular panels and completed one revolution in twenty seconds producing a 0.638-second flash every five seconds. The illuminant was petroleum vapor burned under a mantle. Captain William Bell from French River was the first keeper of the Cape Tryon Lighthouse, serving from 1905 until his passing in 1915.
The lantern deck was recanvassed and the flashing around the lantern base renewed in 1928. An unused chimney was also taken down at that time, the resulting hole boarded over, and leaks in the roof and plaster in the dwelling were repaired.
James Graham was hired as a temporary keeper in 1936 but resigned in early 1937 only to return as a permanent keeper later that year after William Brander was relieved of duty.      Keeper Graham took a leave of absence in September, 1942 to join the armed forces and returned as keeper in 1948. Arthur Paynter kept the light from 1953 until it was automated in 1962.
The original Cape Tryon Lighthouse was replaced in 1967 by the present square, pyramidal tower, which stands 12.4 metres (40.7 feet) tall, has a focal plane of 33.4 metres (110 feet), and exhibits a two-second flash every six seconds.
After the original Cape Tryon Lighthouse was decommissioned, it was moved a short distance to Cape Road, where it sat empty and neglected for a few years. Around 1964, a family from Montreal, Quebec purchased the lighthouse and relocated it a few kilometres to the west to their property in Sea View.
Ron and Alberta Somers purchased the lighthouse and moved it to its current location in Park Corner, where they lovingly restored the lighthouse to serve as a summer cottage. The Somers just happen to be related to two of the keepers who served at Cape Tryon. Ron's great-uncle is James Graham, and Alberta's great-great-grandfather is Captain William Bell, first keeper of the lighthouse.
Lucy Maud Montgomery, author of Anne of Green Gables and numerous other works set on Prince Edward Island, was living in Cavendish, on the eastern shore of New London Harbour, when Cape Tryon Lighthouse was established. In 1909, she recorded the following about Cape Tryon and its new lighthouse.


Away to the westward six or seven miles the view was bounded by New London Point [now called Cape Tryon], a long, sharp tongue of land running far out to sea. In my childhood I never wearied of speculating what was on the other side of that point – a very realm of enchantment surely, I thought. Even when I gradually grew into the understanding that beyond it was merely another reach of shore like our own it still held a mystery and fascination for me. I longed to stand out on the remote, lonely, purple point, beyond which was the land of lost sunsets. I have seen few more beautiful sights than a sea-sunset off that point. Of late years a new charm has been added to it – a revolving light which as seen from here, flashes on the point in the dusk of summer nights like a beacon “O’er the foam/Of perilous seas in fairylands forlorn.” 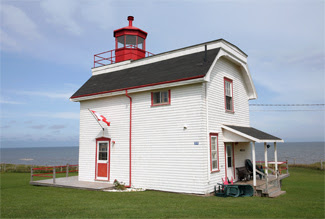