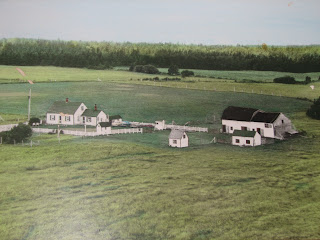 This is an aerial view of Doucet House taken sometime in the 1950s.  The house was built by Jean Doucet in the late 1700s of hand-hewn logs.  This house is thought to be one of the oldest house on the Island. 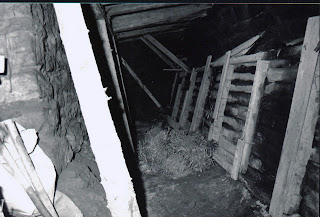 Parks Canada Photos. 1974.  The basement of Doucet House - to the left is the base of the large sandstone fireplace. 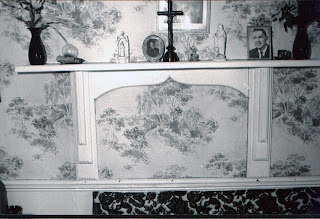 Parks Canada Photo 1974.  The wall mantle in the parlour of Doucet House.  Note the photo on the right - Premier Alex Campbell. 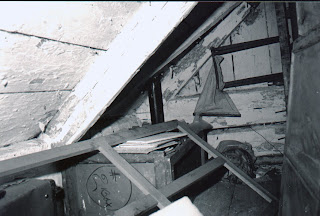 Parks Canads Photo 1974.  Under eave storage at Doucet House - note the top of the log wall directly back and the white-wash on the ceiling and walls. 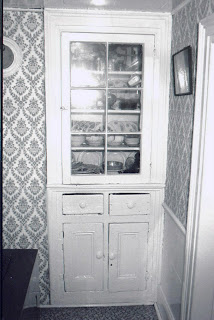 Parks Canada Photo 1974.  The Dresser.  In the absence of a priest in the Rustico area Jean Doucet was given privileges to carry out Mass and other duties by the Bishop of Quebec - tradition has it that this cabinet, or some part of it, was used in the ceremony - unfortunately it was sent to the dump when the house was sold and converted to a summer home in the 1980s. 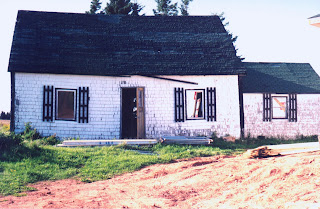 The Doucet House as it sat empty and ready to be demolished or taken away to make way for a new house.  The Friends of the Farmers Bank decided to take the house and restore it as it held significant historic value to the area.  In the fall of 2000 the house was stablized, thanks to Parks Canada, and moved from Grand Pere Point to sit beside the Farmers Bank of Rustico. 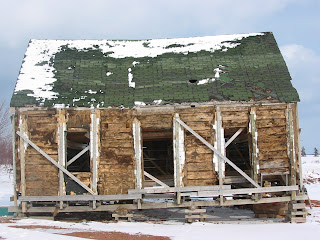 The Doucet House in February 2003 - shortly before restoration began.  The one-and-a-half storey house is 28'-6"x21'-9" with a 11/12 pitched roof.  The logs of the front wall had to be replaced due to rot.  A dendrochronolgy analysis of the logs was undertaken and determined the logs were most likely cut in 1768. 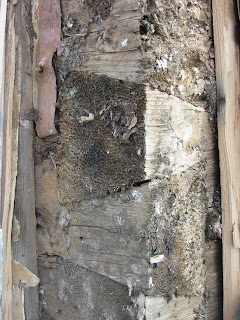 Log corners cut in the dovetailed or military method - note the birch bark. 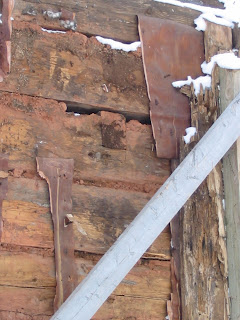 The back wall of Doucet House.  Note the brick clay chinking between the logs and the birch bark which had been applied to the logs before the vertical board sheathing was applied and later the cedar shingles.