When Claude Arsenault saw my Feb. 23, 2013 blog post about the 2013 Heritage Award presentations and the PEIMHF logo, he told me about designing it many years ago. 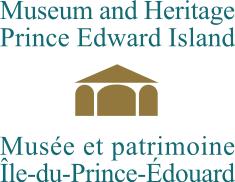 “I designed the PEI Museum logo about 40 years ago when I was a student of Graphic Design at Sheridan College, about 1970.
I was asked by Ardis Desborough, my first art teacher in Summerside, who was somehow involved in Father Bolger's project through Wanda Wyatt as Ardis held art classes there.  That’s how it all evolved – in those days there was no computer designing and Graphic Design was relatively uncommon locally.
I remember working on it - it all came from a post card picture I bought at Charlottetown airport, when I was returning from my Christmas break!  I used Province House as a starting point, and reduced it down to make it more domestic in scale; and the three arches, worked out nicely to symbolize Prince, Queens and Kings counties,  with the roof as a umbrella sort of idea - not unlike the Island provincial flag with the trees, etc.
So, I sent the original artwork to Father Bolger and never gave it another thought.  I received an honorarium for this work.  Then moving back home a few years ago I started to see it here and there, at Eptek Centre, Green Park Shipbuilding Museum, on plaques, letterheads, etc.  One day in passing I told the story to the current director of PEIMHF who hadn’t heard the story of its origin.
In retrospect, I love the logo, and it is a sort of living legacy, and that makes me happy.  It gets used in many different applications; colour changes etc. and has stood the test of time, because, in my opinion, it is simple and not complicated.”
- Claude Arsenault, Birch Hill, P.E.I.
Posted by Carter W. Jeffery at 3:13 PM